Praying Together Over the SCOTUS Decision to Overturn Roe v. Wade 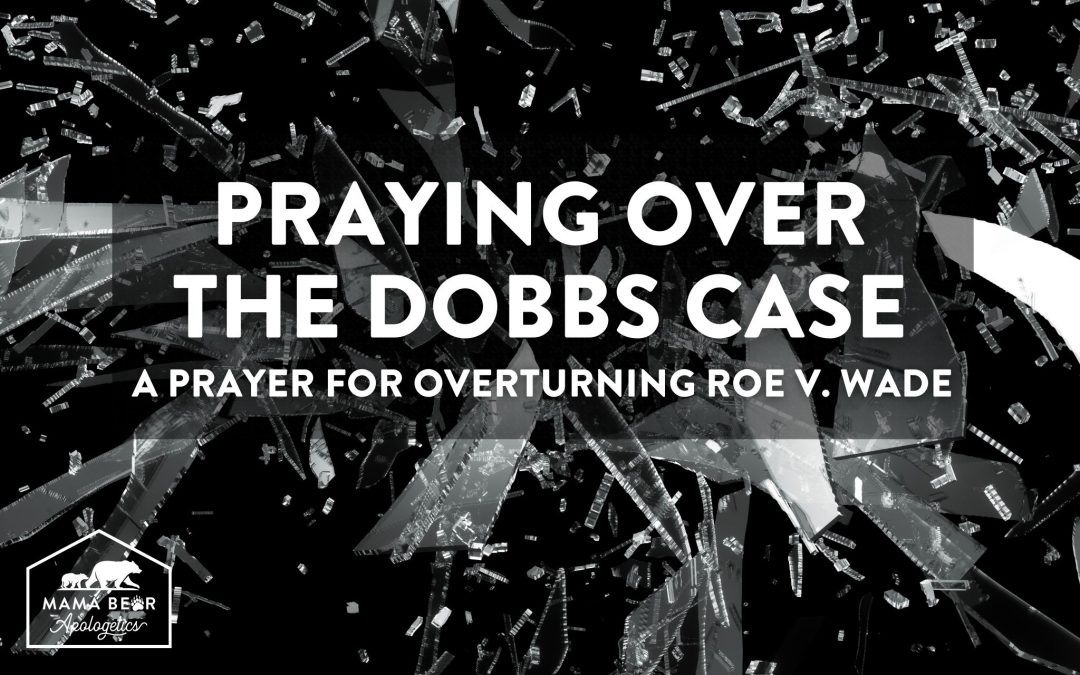 Oh Lord, my God. My rock. My redeemer. We have so much blood on our hands.

You say in Your Word that the blood of the innocent cries out to you (Genesis 4:10). Bloodshed pollutes the very land in which we live (Numbers 35:33). Oh, my God, our land is polluted with the blood of innocent lives.

We weep. We wail. We mourn for the 62 million children in the United States alone who have had their lives cut short since Roe v. Wade. Each one of those children was an eternal soul who never had the chance to live his or her life. God, we repent of our silence, if we’ve been silent. We repent of our complicity, if we have been complicit. We receive your grace and forgiveness for where we have sinned. We pray that the lies surrounding abortion would wither and die. One person’s life is not more important than another’s. We cry to you, Abba, begging you to cleanse our land of this abomination.

Lord, you remove kings and set up others (Daniel 2:21). You raise up righteous judges in the land. Lord, we praise you that we are one step closer to removing the blight of our time in the form of Roe v. Wade. But the work is not done. Father God, the decision has not been set in stone. And so we pray for those who would seek to thwart the work that You are doing.

We pray for all the justices to seek righteousness in our land:  John Roberts, Clarence Thomas, Stephen Breyer, Samuel Alito, Sonia Sotomayor, Elena Kagan, Neil Gorsuch, Brett Kavanaugh, and Amy Coney Barrett. May they be guided by truth.

Lord, free those who are in bondage to the false promises of abortion, and especially for our sisters who are trying to outshout their own consciences. God, we pray that they would be able to grieve what their hands have done and receive your freedom and release. Our culture will not change merely law by law, but heart by heart. May the scales fall from our eyes as a nation.

We pray right for those who leaked the documents, for them to be exposed and brought to justice.

We pray for the SCOTUS judges who voted to overturn Roe v. Wade. Protect them and their families as they will receive pressure and probably death threats in an effort to change their decision before it is officially published. We pray that none of them would succumb to the pressure to change their vote. We pray that their vote and decision would stand and that we would be one step closer to protecting the unborn.

Lord, we pray that you would raise up adoptive and foster families who are willing to expand their nests to make room for the lives that will be saved. We pray that you would provide jobs and homes and conviction within the Christian community. May we provide help and support to the mothers who are in need.

God, I pray for boldness for pastors who have not wanted to rock the boat on this issue. May they be emboldened to speak now, if they haven’t before.

And Lord, we pray that you would raise up prayer warriors. For this war is not against flesh and blood, but against the rulers, against the authorities, and against the powers of this dark world. And against the spiritual forces of evil in the heavenly realms. Lord, we are at war with the gods of the Caananites, the gods of Moab — against Chemosh and Molech. We have worshipped sexuality and used sex for idol worship, and then sacrificed the children at the alter of our convenience. This is a spiritual battle and the god of child sacrifice will not go down without a fight. Lord, raise up warriors.

God, raise me up as a warrior. Teach me to pray without ceasing. Teach me to pray with boldness and spiritual authority. Give me eyes to see the spirits that are at war — behind the people and behind the ideologies.  I don’t understand how my prayers do battle, but they do, as we see in Daniel 10. Lord, give me the faith to labor in prayer even when I don’t understand how it works.

The heart of kings is in your hand Lord (Proverbs 21:1). So is the heart of judges. Please give them a Godly stubbornness to continue with their decision even if the entire country erupts against them. We pray for strength and resolve in the face of hatred.

If you are wondering what this is about…

Yesterday, someone leaked an early draft of the SCOTUS decision regarding Dobbs v. Jackson Women’s Health, a landmark case that could overturn a half-century of Roe v. Wade, the case that declared abortion a “constitutional right.” We will be covering what exactly happened and what it means in upcoming blogs. For the time being, please pray daily that this leaked document will not result in undue pressure for the judges to amend their decision. To be clear, overturning Roe. v. Wade does not outlaw abortion. It simply denies that it is a constitutional right. For more info, see our upcoming blog series.