Motherhood: More Important than Rocket Science (according to Cathryn Buse!) 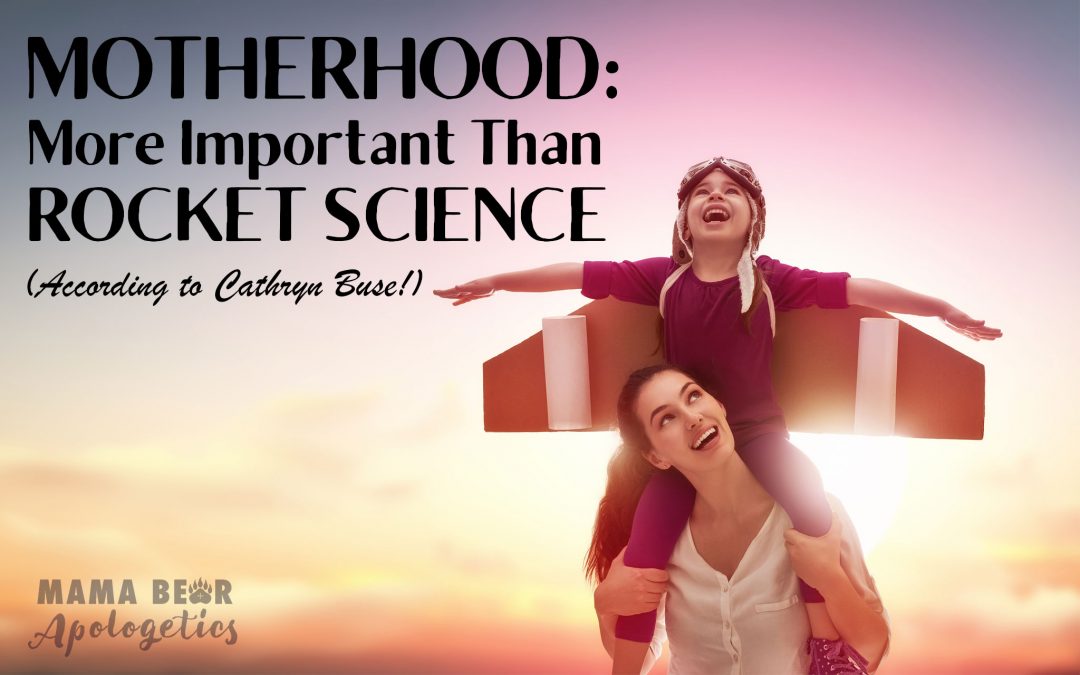 Why would a successful engineer leave NASA to be a mom, and apologist, and now a #mamabear apologist? Click To TweetI graduated valedictorian from a nationally ranked International Baccalaureate high school. I finished summa cum laude with a bachelor’s and master’s degree in engineering – all in five years while playing on a volleyball scholarship. Fresh out of college, I was a project lead on a new device for the PAC-3 missile system. Later I worked as a systems engineer for a new launch vehicle program at NASA. At that point, my husband and I were expecting our first child. And God rocked my world. Not just with motherhood, but by calling me to quit my job and stay home with our son. I never thought I would do that! My plans were to continue working my way up at NASA, but God’s plans were different. I went from reviewing the main propulsion system design on a rocket to keeping up with how often my son pooped each day. I went from assessing launch pad capabilities that support the launch vehicle system requirements to singing nursery rhymes and teaching shapes and colors. And it made my head hurt. It actually made my head hurt to change from my engineering career to my mommy career (let’s face it, it is simply an unpaid, no-vacation-allowed career). And now this little guy that rocked my world will be starting kindergarten this fall, and he has a little brother just 20 months behind him. Yikes. And that definitely still makes my head hurt!

Don’t get me wrong. I love what God has called me to. I was surprised as all get out, but God always knows what He’s doing. I’ll admit, some days it is still hard to remember why I left a place where my opinion was valued to go somewhere that I’m lucky if anyone acknowledges that I’ve spoken (ok, usually yelled) their name. I went from being trusted with decision making on NASA design implementations to being questioned if I know that “aten” is not a word.

While on this course of teaching these little guys their colors, how to read, and why those sounds shouldn’t be made at the table, I’m trying to instill in them the truth about God. My prayer is that they will not only learn Bible stories but will cherish reading the Bible; that they don’t just know about God but know God Himself. And that’s a pretty big task. How do you start to do that? Well, like any mom, I started with those picture book Bibles that told all the “main” stories of the Bible (or really the ones that translate into happy, colorful pictures that involve animals). But then my son, being a whopping four years old at the time, decided to ask me, “Who made God?” followed by a question about the trinity and why Pontius Pilate killed Jesus, which led straight into a discussion about the fall of Lucifer. What?!? Those weren’t part of the picture-book Bible! But God always knows what He’s doing.

See, for the past 20 years or so, I had been studying apologetics, and for much of that time had been teaching apologetics. Granted, I hadn’t been teaching it to preschoolers, but the concepts are the same, whether you are 4 or 84. There is still the same answer about who made God, what happened to Noah, and how we know God exists. I may explain it on a different level using different vocabulary, but the truth still remains. So I answered those questions with the same truth that I’ve answered them for adults. And though he may not understand all the theories or terms, he did walk away with understanding one important thing. Those big questions have answers. Those big questions don’t scare God. Those big questions don’t refute the Bible.Big questions don't scare God. There are even bigger answers! Click To Tweet

What is our role as parents?

This is where I fell in love with a quote by William Lane Craig. “If parents are not intellectually engaged with their faith and do not have sound arguments for Christian theism and good answers to their children’s questions, then we are in real danger of losing our youth. It’s no longer enough to simply teach our children Bible stories; they need doctrine and apologetics. It’s hard to understand how people today can risk parenthood without having studied apologetics.” I could not have summarized it better. You cannot approach parenthood without having some working knowledge of how to defend your faith. I’ve often said that it’s not enough to teach your children the Bible but you must also teach them why the Bible. When I started instructing my children in learning Bible verses and stories, I also had to be prepared to tell them why we are learning the Bible over everything else. Why is this true and the other worldviews not? No, they may not ask me that tomorrow but they will need to understand that eventually. And the thing is, if I show them at this early age that those questions have answers, then I can continue to show them that as they grow in their questions and grow in their understanding.

Because one day, their questions will be much deeper and have much bigger consequences. One day they’ll be called on to answer those questions to their friends, to their professors, and to their coworkers while their faith hangs in the balance. Answering with “my mommy told me” won’t cut it – nor should it. If that truly is the only reason for believing Christianity, then we should all walk away from it. I don’t want to believe in something if that’s all there is to it. Thankfully, that is not what Christianity is built on. It is built on a solid foundation of truth and logic. But we must show our children that if we expect them to remain steadfast under the criticisms from the world. We do them such a disservice, and we put their own faith at risk, by sending them out into the world unprepared for the types of challenges they face. But in order to prepare them, we must be educated ourselves. We cannot teach them what we do not know. Parents must dig in and study apologetics to answer those questions themselves so that they can equip their children to do the same.

What have we been missing?

And sadly, it’s not just apologetics missing from our instruction to children, but even a deeper understanding of the scriptures. Many adults have never learned the Bible beyond those picture-book Bible stories. We never go back and read the details about Noah’s building of the ark or Moses’ parting of the Red Sea. So we’re trapped in this mirage of knowing those stories but not really knowing why or how or when. And if we don’t know that, how can we teach our children that? We tend to assume that if we know the gist of what Moses did, then that counts, and we never go back and study it. The storybook version just shows a mommy putting a baby in a basket in the river. But why? When did that happen? How did the Israelites find themselves enslaved in Egypt? Without understanding that, we fail to see what God was doing there. We fail to see how even those accounts point to Jesus. And then we are unable to show that to our children.

One day I was reading to my son about the prophecy given to Abraham by God that though he would have numerous descendants, they would be enslaved in a foreign land for 400 years. I asked him if he knew how that happened. So I was able to show him the lineage of Abraham down to Joseph, where he could recall the story book version of Joseph being sold as a slave. I was able to tell him how Joseph ended up in Egypt, where he could recall the story book version of Joseph revealing the dreams to Pharaoh. I was able to explain how the rest of Joseph’s family came to live in Egypt and multiplied by the blessing of God. I told him how that made the next ruling Pharaoh so afraid that he made the Israelites his slaves. Now I could show him what God did by raising up Moses, where he could recall the story book version of Moses leading the Israelites out of Egypt and walking on dry land through the Red Sea.

Now these disjointed Bible stories start to come to life as the recorded accounts of real people living in a real time being used by the living God to accomplish His will. They were no longer cute little stories shared at Sunday school, no different than the cartoons they watch on TV. They weren’t random fables that always had a coloring sheet to go with it. These were now authentic accounts of God’s work in and through mankind. But parents must understand that first in order to teach that to their children. We must actually study the Bible in order to adequately teach the Bible in context.

Where do we go from here?

Whether you become a stay-at-home parent or remain a working parent, your new “career” is always to raise your children well. As with any career though, you must continually read up on the latest for your industry. So as parents, we educate ourselves on the best nutrition, the safest toys, the best education methods, and the most effective discipline approaches. But the most important part of our new “career” as parents is to train up our children in the way of the Lord and to bring them up in the discipline and instruction that comes from the Lord. To do that well, we must be educated in the Bible and in apologetics. We must know our faith and know why our faith. The understanding of Christian doctrine, scriptural knowledge, and apologetics is crucial for parents to build a solid foundation of Christianity for their children. Those questions about the existence of God, the exclusivity of Christianity, and the validity of the Bible will always be there. We must make a choice whether we will answer them for our children or whether we will let the world answer them for our children. What will you decide?My most important career was to raise my children to know and love the Lord. Click To Tweet

Guest Author is probably awesome at what she does. She is probably a mom, but possibly not. She definitely has good things to say, otherwise, she wouldn’t have been offered the position of guest author. You can read more of Guest Author’s work at the link at the end of her post. We like Guest Author. She is our friend.