Don’t Believe the Lie – You ARE Smart Enough! 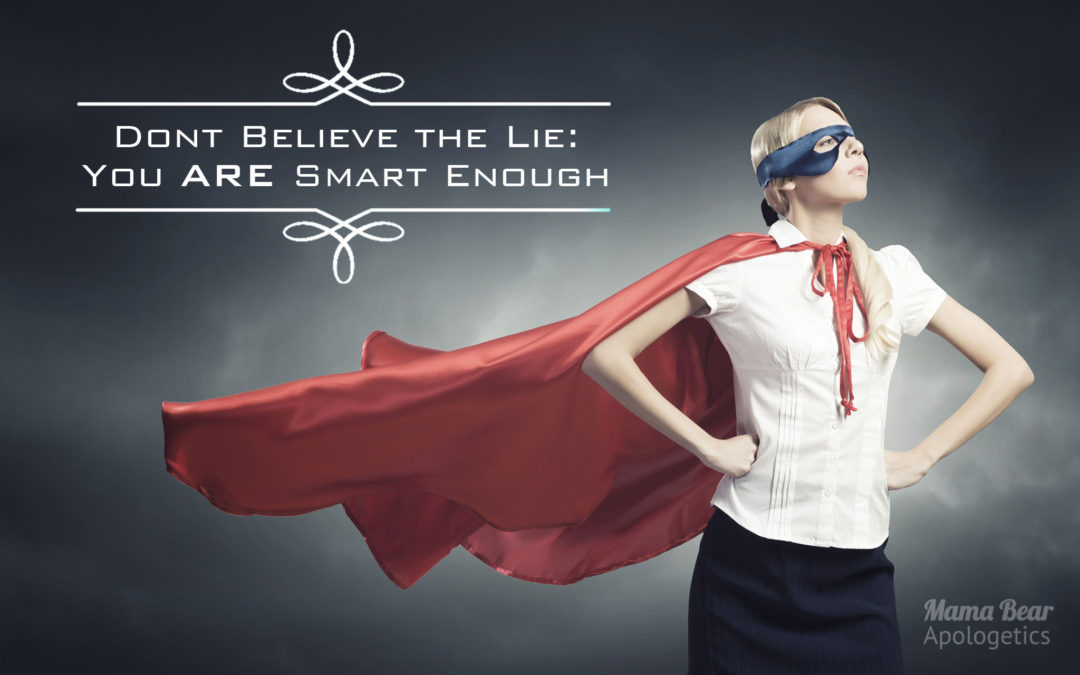 I was recently interacting with a young man on Facebook who is part of the crowd that my husband and I ran with back in Dallas. He was obviously struggling with a lot of stuff and (with my husband in the room and with his full knowledge) I started up a conversation with him on Facebook chat. It was so interesting to hear him flip back and forth between really intelligent insights, honest statements, and… straight up lies. I’m not saying he was lying about something. But rather he was verbalizing every single lie that Satan would ever want us to believe about ourselves, generally centering on worthlessness. It was really convicting.

Why was it convicting? Because it made me realize how many times a day I listen to the same lies and don’t speak truth into them. This is something that I think we women are excellent at. Aren’t we awesome at beating ourselves up? Don’t we get gold stars for finding every imperfection we can in our bodies or in our abilities? On the flip side, I think that’s the reason that it was the women who were faithful to Christ during the crucifixion when the men all ran. The women knew they had nothing to lose – no pride, no position. (To be fair, the disciple John was there.)

The beautiful thing is, God uses the weak things of this world to shame the strong. On our recent podcast, Melissa Travis pointed out a common reaction that many women have when getting started in apologetics. “All that theology just goes right over my head. It’s best to leave it to the professionals.” Ladies, this too is a lie! The first great commandment is to love the Lord our God with all our hearts, souls and minds! We don’t have to be Biblical scholars to familiarize ourselves with the common objections and questions to the faith. But we listen to the lie that if we can’t be the best, then we shouldn’t even try.

Normally I’m not one for cliché’s, but occasionally I’ll find one with which I wholeheartedly agree. This is one that has stuck with me since I was a teen: God doesn’t call the equipped, He equips the called. I fully believe that. Ladies, you are called to be God’s ambassador to your children, and part of that role is representing the heart, soul, and MIND of God. We may not know all the answers yet, but embarking on the journey is an act of faith. There is not a single one of us women who started out armed with a stack of answers. We take it the same way we take any new subject: one question at a time.

Sometimes, just dignifying the question is half the battle! When your children ask questions that you aren’t sure how to answer, praise the Lord that you live in the internet age! (Actually, you can probably rue the day as well. That’s likely where they got the question from. But I digress…) As my dad always says, you don’t have to know all the answers. You just need to know where to FIND the answers. Don’t be discouraged that you don’t have all the answers yet. And whatever you do, don’t believe the lie that you are not smart enough to understand them. The best teachers aren’t the ones to whom everything came easy. The best teachers are the ones who had to struggle with the material to teach themselves first. Those are the teachers who can break a difficult concept down for a child.