Confessions of a Former Christian Snowflake 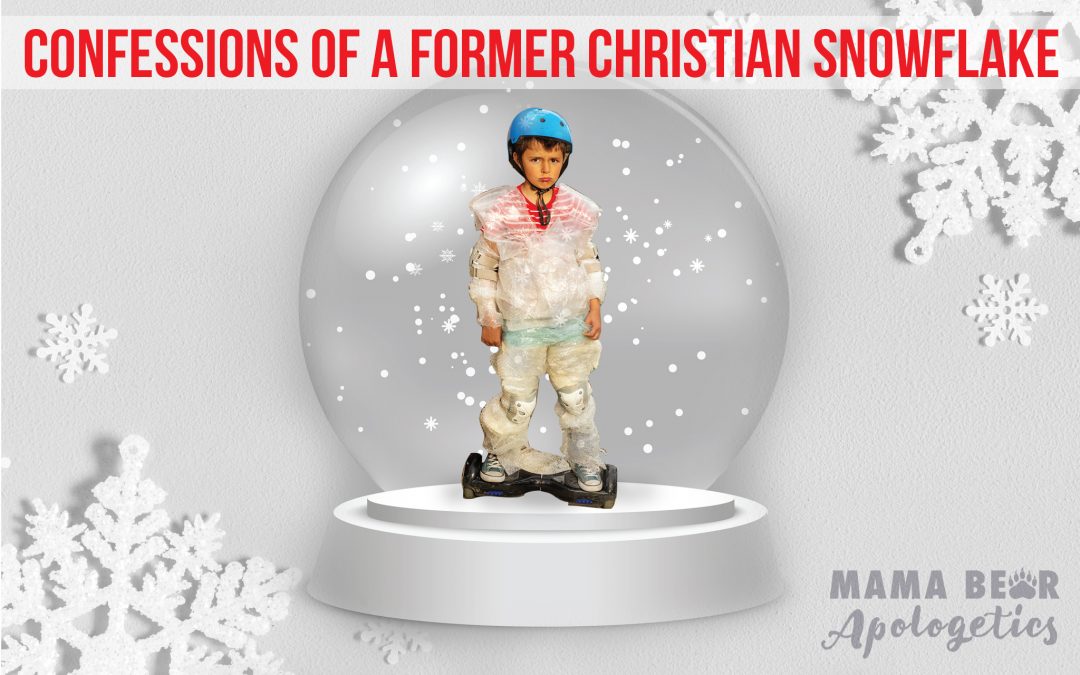 Back when most of us were still in diapers, there was a trial that made some buzz on the eastern Tennessee nightly news. A parent had been flipping through her children’s classroom readers when some of the material made her conservative Spidey senses tingle. No, it wasn’t a book about sex or drugs or even (gasp!) rock and roll. Instead, it was about women working in factories during WWII.

Apparently, learning that women worked in airplane factories during WWII promoted feminism, and an author comparing Leonardo da Vinci’s artwork to the “divine touch” was a dose of futuristic supernaturalism.[1]

In fact, any reading curriculum that had stories that taught virtues along with phonetics without affirming Christianity could lead their children to “…adopt the views of a feminist, humanist, pacifist, anti-Christian, or a vegetarian” (emphasis added).[2]

I think that last bit was the straw that broke the camel’s back. Grab the lighter fluid, honey! We’d best burn these devil books before Suzie comes home from elementary school thinking she can demand a tofurkey for Thanksgiving!

I would love to say that my own parenting style looked nothing like that, but that’d be a big ol’ lie. At the beginning, I was what you’d call a Christian snowflake.

If you’re part of the millennial crowd (woop woop), you’ll no doubt be familiar with the term “snowflake.” Snowflakes are those overly sensitive folks who, unlike Elsa, simply cannot “let it go” when they hear something they don’t like. Christian snowflakes aren’t much different. Click To Tweet

It wasn’t until my husband and I had a few heartfelt conversations that I realized what sort of messages my snowflakery was telling my littles:

Snowflake Message #1: If it’s not about Jesus, run!

Remember Fear from Pixar’s Inside Out?[3] As a new Christian mom, I looked a lot like that guy. If there was something that didn’t come with the Dove Foundation’s seal of approval, word would spread through the Facebook prayer chain, and we would all start running for the proverbial hills.[4]

Looking back, that was a dumb way to parent. Aside from this being emotionally exhausting, I was missing out on some valuable moments to help my kiddos practice their critical thinking and outreach skills in the safety of home. Paul told the Corinthians, “I wrote you in my letter not to associate with immoral people; I did not at all mean with the immoral people of this world, or with the covetous and swindlers, or with idolaters, for then you would have to go out of the world” (1 Cor. 5:9-10). We should have that same mindset as parents. We are not called to take our kids out of the world.

Now don’t get me wrong. There are some things, like sexual sin and temptation, that we are to run from, no questions asked. But false philosophies, different beliefs, and alternative perspectives should be introduced in age-appropriate stages so that our kiddos can learn how to reason together while remaining unstained by the world (see James 1:27and Isa. 1:18).

I didn’t realize how bad my early arguments were until I saw the parents in the Mozert v. Hawkins using some of the same ones (*cough* slippery slope) during the trial (mentioned above).[5] Talk about eye-opening!

To be fair, outside of debate club, we’ve been taught to think with our feelings, not with logic. Toss our babies into the mix, and our emotions (with the help of that fear we were talking about) can easily make us look like that Mama Kangaroo from Horton Hears a Who shouting, “What about the children?!”[6]

Here’s the thing, though: Scripture tells us how to raise our kids, and it’s not like that. For example, see Paul’s exhortation in Ephesians 6 :4 regarding instruction (Greek nouthesia: knowledge, teaching) and training (Greek paideia: discipline).

This two-punch combo was in God’s command to the Israelites, too, when He told them to lāmad, or train, with the implication that it will be used with their children (Deut. 4:10).

It’s also the same word that’s used to describe how Israelite warriors used prayer and combat training preparing for battle,[7] all of which they won,[8] btw. This makes perfect sense when you see that Paul’s training encouragement in Ephesians 6 comes right before putting on the armor of God.

So, When you’re tempted to avoid rather than train, remember: we were given spiritual armor because it’s swords, not safe spaces, that keep us from being captive by false philosophy (Col. 2:8). Click To Tweet

Early last summer, a mom shared with me that she never took her kiddo with her on errands because she didn’t want to risk him getting exposed to anything out in public, and she wasn’t talking about germs (though that’s definitely something to think about during this Covid-19 pandemic). She laughed and said that if she could keep him in a bubble, she would!

I can’t say that I blame her, what with all the craziness creeping into public school curricula. In fact, this was a big motivating factor for me to homeschool when my oldest turned five way back when.

The problem with Christian bubbles is that they have the best of intention but the worst design flaw: they’re easily popped. No matter how much we’d love to keep our kids safe from the world, the world will always find a way in. If we haven’t prepared out kiddos to wield their armor, they won’t stand a chance.

This is why I love the Mama Bear Apologetics book image. It shows a mom protecting her little one against the arrows that he’s too young to defend against–while simultaneously training him in the faith. Talk about lāmad in action!

This last one only happened within the trial, but it floored me so much that I had to include it. One of the arguments that the parents in Mozert had was that their kids shouldn’t hear, learn, or discuss any idea that wasn’t Christ-focused because “they didn’t need to think,” as the Bible had done that for them. [9] Yup, you read that right.

On one hand, I totally get their fear. These parents were worried that if their children heard of other religions and ideas that they would be tempted to leave the faith. But kids don’t remain Christians because they don’t have other options to choose from. They remain Christians when they choose to follow Christ after they experience God’s love the work of the Holy Spirit and see that Christianity is not only true but offers the best answers for life’s most important questions (2 Tim 3:16-17). These questions commonly condensed to:

What is prime reality—the really real?

What is the nature of external reality?

What is a human being?

What happens to a person at death?

Why is it possible to know anything at all?

How do we know what is right and wrong?

What is the meaning of human history?

On the other hand, wanting to protect the minds of our children is a great thing, and we’d be failing if we didn’t. But if we don’t train them to distinguish truth from falsehood, we’ve only succeeded in making them an easier target for the enemy.

We need to help our kiddos grow in wisdom by chatting about the social, moral, or political subjects that they’re learning about in school and seeing on social media. Click To TweetNot to mention different world religions, which we just happen to have on our site here, thanks to our amazing Mama Bear, Lindsey. So far, she’s covered Christianity (because that’s where you should start), Judaism, the New Age Movement (plus Progressive Christianity), and the Jehovah’s Witnesses. She just started her series on Islam.

As my husband and I discussed what I thought were my noble concerns, I realized what was really fueling my actions: anger, fear, isolation, and ignorance, not one of which you’ll find listed in the fruits of the Spirit (Eph. 6).

I had forgotten that I am a parent, not the Holy Spirit. My job isn’t to convert my kiddos, but to make them competent. When competence is our focus, our perspective toward challenges changes — they become opportunities to raise warriors.

So, let me ask you, what’s fueling your parenting?

Stories in which children were naughty “encouraged disobedience” and exercises where students analyzed a situation from a point of view with which they disagreed was an, “excessive use of imagination.”

[2] I mention this in my paper here, http://epsociety.org/userfiles/art-Davison_Response%20to%20Lafollete.pdf

[3] In case you missed our first #MovieMonday #QualityQuarantine video, we talked about Inside Out and emotions. Check it out here: https://www.youtube.com/watch?v=IAxngfPDWPw&t=5s.

[4] Remember the Bunny Song debacle? If you don’t, check out what happened here: https://www.deviantart.com/domobfdi/journal/Let-s-Learn-VeggieTales-Bunny-Song-Controvercy-533820717. You can see the new and improved Bunny Song here: https://www.youtube.com/watch?v=Ht1HqB6taog.

[5] The slippery slope fallacy was a big one I had to learn. This is where the reasoning leads you to the worst possible conclusion, even if there are other less dramatic endings possible. This family (and they aren’t alone) pretty much think any exposure to anything other than Scripture guaranteed their kids a seat on the short bus to hell.

[6] Without meaning to, we’ve told our kids that examining the evidence for Christianity isn’t as important as maintaining their spiritual comfort. As one co-op director told me, “Apologetics might make some parents uncomfortable, so we don’t offer that class.”

[7] Fun fact: while it’s mostly used to refer to warriors (and also child rearing) it’s also used to describe how musicians practice their craft. So, take heart all you oboists, because Scripture describes you as a warrior!

[8] Whenever they relied on God and used the combo, that is.