Who Cares What Christianity Teaches if it’s Not Actually True? 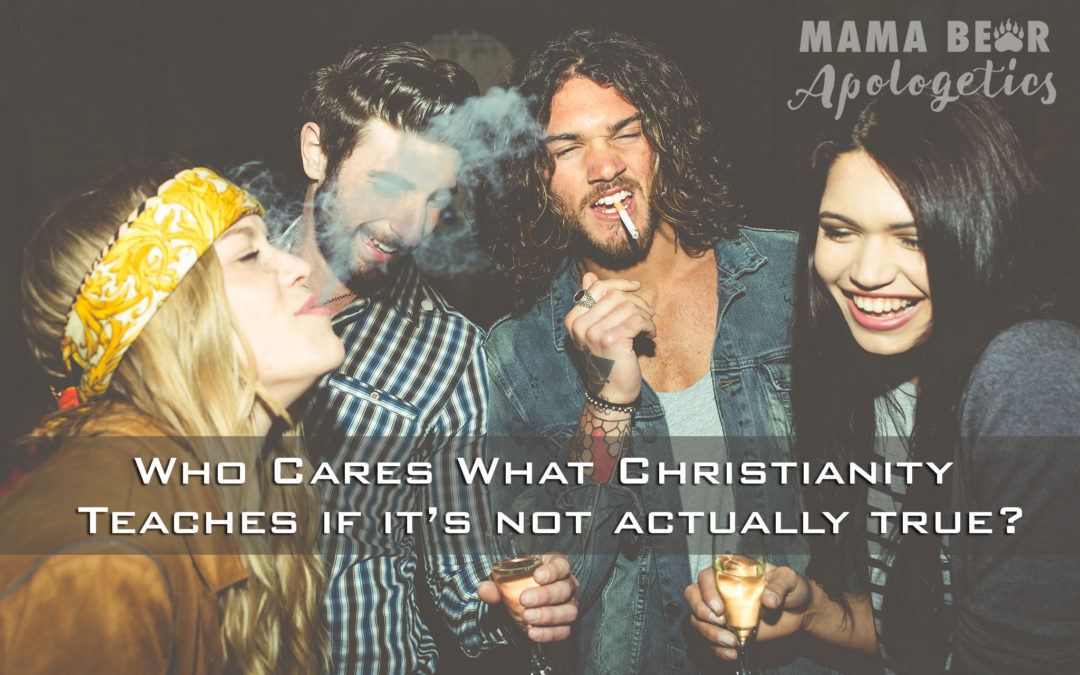 You heard that right! I said it doesn’t matter unless Christianity is true! While moral questions still matter from a cultural standpoint, they don’t matter when evaluating the truth claims of Christianity. I was recently talking with a young woman on a flight. She is currently in a university theater program and was struggling with her faith. Her main question was in regards to the homosexuality issue. She had such a tender heart and genuinely didn’t know what to do. Coming from a theater background, she had many friends who were professing homosexuals. And though she was raised in a Christian home, she found herself doubting whether or not she could be a Christian based on what Christianity taught about homosexuality.

She probably expected me to start going into the moral argument for Biblical marriage, listing verse after verse, proving that the Bible condemned homosexuality. What she probably didn’t expect for me to do is completely switch the conversation around and ask her, “Let me ask you an important question first: do you believe that Christianity is true? Do you think that a man named Jesus actually walked on this earth, actually died, and actually, physically rose from the dead? Because if you don’t, why should it matter to you what the Bible says about homosexuality?” She sorta looked at me blankly and shook her head. She had no idea. We spent the rest of the flight discussing that issue. (And spoiler alert: There are good reasons to believe that Christianity is true.)

Her story was one I’ve heard a thousand times before. She had been raised in a Christian home, gone to church her whole life, called herself a Christian, and yet she had no idea if any of the things she had claimed to believe were actually true. Parents, this is a problem.

If Jesus Christ never lived, died, and rose again, it doesn’t matter what scripture says about anything.

I know that this sounds like a scary statement, but it is true. Paul himself says that if Christ has not been raised, then our preaching is in vain, so is our faith, and we are to be pitied as fools. (I Cor 15:14-19) Eat and drink, for tomorrow we die. Yet, even though we know that Jesus is central to the Christian faith, we still (as the church-at-large) slip back into a comfortable Phariseeism and make Christianity all about the “rules.” (This is especially prevalent at youth groups.) After all, we can see the beneficial effects of rules. We can measure that. We can measure whether or not our teen comes home with alcohol on their breath. We can’t measure true belief. We don’t have access to it, so we focus on what is seen (adhering to a list of rules) instead of on what is unseen (instilling a grounded, reasonable, rational, defensible faith.)

Focusing on behavior modification might seem like it’s working for the time being, but research keeps showing that it isn’t, at least in the long run. A deep, abiding faith in the truth claims of Christianity is a slow growing seed. You may not see the fruit for years, possibly decades. But speaking as a person who would have walked away from the faith had it NOT been for apologetics training at a young age, let me be clear: it matters.

Do not focus on the immediate question if they are not sure if Christianity is true. Playing whack-a-mole is a pointless (and endless) game.

Whack-a-mole is that boardwalk game where you have those little critters that poke their head up through a hole and you are supposed to whack them with a foam hammer to push them back down. (Kinda sadistic when you think about it.) These are what morality questions are for someone who isn’t sure if Christianity is true to begin with. You could answer their question for now, but another will always pop up again, and you’re right back where you started.

Not only is it an endless game, but it is an endless distraction from the real issue. Scripture is clear that there is one central issue that distinguishes believers from non-believers, and Jesus is that central issue. “Who do you say that I am?” If your child is uncertain about whether or not Jesus was a historical figure who lived, died, and rose from the dead, it doesn’t matter what they believe about anything else. When – and only when – that question is answered can any other question matter. Questions about Christian teaching are no longer an issue of doubt that will crumble their faith. Rather, their questions about morality will expose what is truly going on in the heart because…

This is where morality questions matter. After all, Satan has the best apologetic possible: personally witnessing Christ’s life, death, and resurrection. It hasn’t changed things for him. When our kids start questioning their faith based on morality questions, what they may be actually saying is “I’m not sure if I want to surrender my life to Jesus.” This is a very different question from “I’m not sure if Christianity is true.” This is where we as parents (of biological, adopted, foster, or spiritual children) need to start asking the tough questions.

If our children are struggling with the truth claims of Christianity, help them understand what a truth claim is, and which ones matter. For a good resource, Rebekah and I did a podcast titled “Core Truths vs. Peripheral Truths of Christianity, and the Importance of Knowing the Difference.” In it, we discuss which doubts should rock our faith and which shouldn’t.

However, if our kids are struggling with whether or not they want to follow Christ, that is a completely different issue than whether or not Christianity is true. It is an intensely personal issue. Our role as parents isn’t to force them into a decision. Our role is to equip them with tools and resources whereby bad arguments cannot take them captive. (Demolish those bad arguments Mama Bears!) We are to model what a life submitted to Christ looks like, and we are to love our children like Christ loved us – through all the bumps and bruises of growing up. Because at the end of the day, God has no grandchildren. Our children are responsible for this decision. We cannot guarantee they will make the right decision, but we can play our part in making sure that they aren’t fooled by clever-sounding (but ultimately unsound) arguments.

Equipping your children to defend and justify the truth of Christ to themselves is one of the most important thing you can do. If your children are young, start them out with J. Warner Wallace’s “Cold Case Christianity for Kids,” newly released last month! If they are older, try his Cold Case Christianity for adults. If you have a science minded teen or older child who is extremely logical, I recommend Cathryn Buse’s recently released “Teaching Others to Defend Christianity: What Every Christian Should Know.” Buse is extremely methodical in her approach. Science minded individuals will appreciate it. And if you’d like a good anthology of a whole schmear of questions, try Natasha Crain’s “Keeping Your Kids on God’s Side: 40 Conversations to Help Them Build a Lasting Faith.”