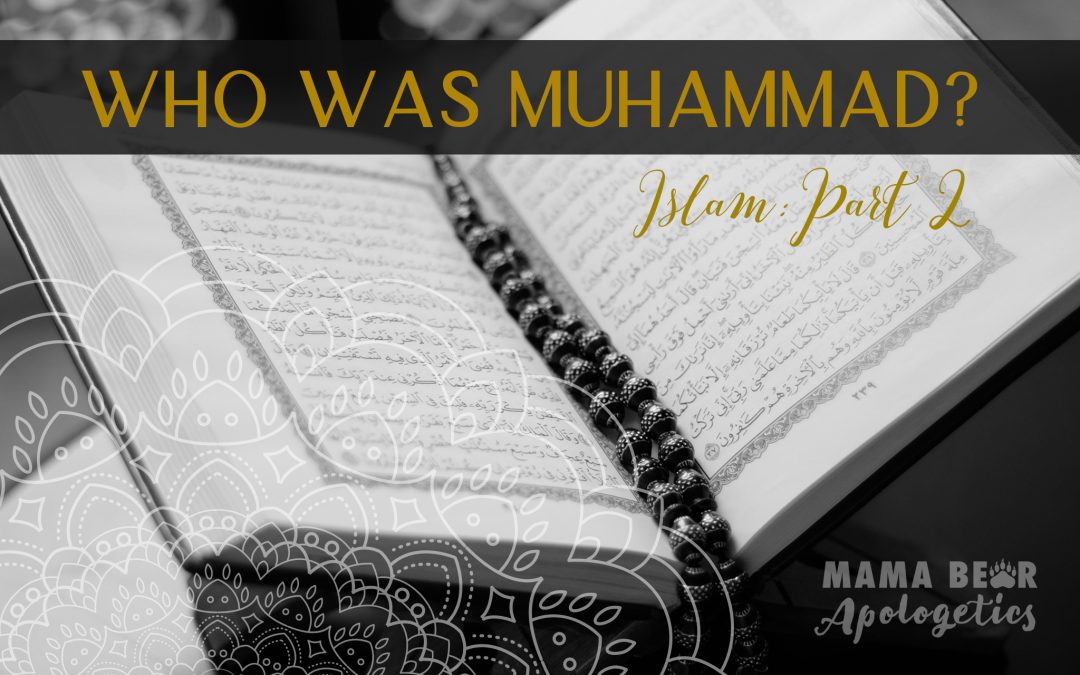 In my first article about Islam (read it here), I gave you a crash course in Islam, but in order to have a full understanding of Islam, we should spend some time discussing its founder and prophet, Muhammad. You’ve probably heard of him, but who was he exactly? He was a very complex man, discussed by many scholars who have studied him in-depth for decades. My hope here isn’t to tell you everything you’ll ever need to know about Muhammad but to give you a basic overview of his life and talk about some of the more troubling aspects of his tactics to expand Islam. I’ll make some recommendations for additional resources throughout this blog and at the end of the series, as well.So, how exactly did Mohammed go from regular guy to prophet? Click To Tweet

Muslims value their history, so at a very young age, Muslims begin to study the sirah, which contains stories from Muhammad’s life. In his book, Seeking Allah, Finding Jesus, Nabeel Qureshi talks about how his father used to quiz him about Muhammad because in order to be like Muhammad, they needed to study him.[2] Let’s take a look at Muhammad’s journey to prophethood, and take notes because I may give you a quiz at the end! (Just kidding!) Muslims study Muhammad in order to be like him. To understand Islam, we, too, must study Muhammad. #worldreligions Click To Tweet

Muhammad was born in AD 570 in Mecca (which you can find on a map by the Red Sea on the Southwest side of Saudi Arabia). 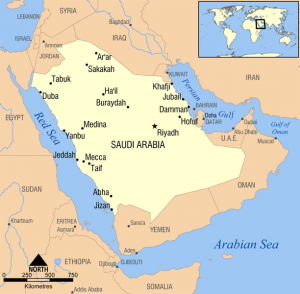 He was orphaned at a very young age. His dad, Abdullah, died just a few days before he was born, and his mom, Amina, died when he was six. Muhammad’s grandfather, Abdul Talib, took him in when his mother died, but he died just a few years later, so Muhammad was raised by his uncle, Abu Talib. Muhammad married Khadija, a wealthy widow and his employer, when he was 25 and she was 40, and they had several children together.

Some Muslims believe that before Muhammad’s mom died, he was outside playing with some friends and was visited by the angel, Gabriel, who opened up Muhammad’s chest, removed his heart, and cleaned it until it shined.[3] Most Muslims, though, believe that Muhammad was first visited by Gabriel when he was 40 years old while he was meditating in a cave near Mecca, which is when he received his first revelation from God.[4] Gabriel revealed the first three verses of the Qur’an (Surah 96:1-5) to Muhammad that day:

Proclaim! (And read aloud!) in the Name of the Lord and Cherisher, Who created – Created man, out of a (mere) clot of thickened blood: Proclaim! And your Lord is Most Bountiful – He, Who taught (the use of) the pen – Taught man that which he did not know.[5]

Because Muhammad couldn’t read or write, he memorized what Gabriel told him. He thought he’d been visited by an evil spirit, so he went home to Khadija to be comforted. Khadija’s cousin, Waraqua ibn Nawfal, who was familiar with Judaism and Christianity, convinced Muhammad that he had received a word from God.

Muhammad experienced several other revelations throughout his life, which led to the completion of the Qur’an, a collection of 114 surahs, or verses, dictated from Allah through Gabriel to Muhammad.[6]

Encouraged by Khadija and her cousin, Muhammad began preaching in the streets of Mecca and continued to do so for about the next 10 years. He taught that there was no god but Allah and was upset that people would make money from selling idols to false gods. He gained a lot of enemies during this time. After his wife and uncle died in 620, he fled from his opposition to Medina, which is 210 miles from Mecca. This journey is called the hegira, which is now the start of the Muslim calendar.

The Military Period — Muhammad in Medina

Even if it’s a little uncomfortable, the question of Muhammad’s use of force is an important one to tackle because Muslims are commanded by Allah to follow Muhammad (Surah 33:21).

Shortly after arriving in Medina, Muhammad formed a treaty[7] with the local Jewish and pagan communities, agreeing that neither would need to convert to Islam and that they would protect each other. This pact eventually broke down, and plots were formed to have Muhammad assassinated. There were several small encounters between the Muslims and the Meccans, which ultimately culminated in the first full-scale battle, the Battle of Badr (March 624). Two other major battles also occurred in the next few years, the Battle of Uhud (December 624) and the Battle of the Trench (April 627). While no one really debates whether these battles happened, the outcome of each is uncertain. We don’t know for sure how many people died or who was the true victor (sometimes a moral victory is more important than an actual victory).

We do know that the Qur’an permits revenge if there is a broken covenant (Surah 8:58), and it also describes these battles, at least in passing (Surahs 8:58, 3:123-25, and 33:10-22).[8] With each battle, Muhammad’s army expanded, and he continued to amass power and broaden Islam, which eventually led to his return to Mecca.

Muhammad and the Expansion of Islam

Muhammad became popular in Medina, but he was still threatened by the Meccans. In 627, he had a dream that he would return to Mecca as a religious pilgrimage. Believing the dream was from Allah, he gathered 1,400 of his followers and began the trek back to Mecca. Along the way, he was joined by several Arabian tribes who swore allegiance to him. In 630, Muhammad returned to Mecca and destroyed all of the statues of Arabian gods throughout the city.[9] Kaaba, the square shrine in Mecca, was made the holiest place in Islam, and it is in that direction that Muslims pray.

After conquering Mecca, Muhammad did engage in a couple more battles, which resulted in Muslim growth. There are differing opinions among scholars as to whether these battles were acts of aggression or somehow justified because of broken treaties or self-defense.Was Muhammad a power-hungry warlord or was he acting under the just war theory? #Islam #Muhammad Click To Tweet That’s much more than I can tackle in a brief blog post, but I recommend Winfried Corduan’s discussion on Holy War in his book Neighboring Faiths.[10] Nabeel also talks about this issue in his book Seeking Allah, Finding Jesus.[11] One thing that struck Nabeel as troubling while he was researching Muhammad was a hadith (saying of Muhammad) he found about war:

“I have been ordered by Allah to fight against people until they testify that none has the right to be worshipped but Allah and that Muhammad is Allah’s Apostle, and offer prayers perfectly and give the obligatory charity…then they will save their lives and property from me” (Sahih Muslim 1.24).[12]

This seems to contradict the Qur’an, which says:

“Let there be no compulsion. In religion: truth stands out. Clear from error: whoever rejects Evil and believes in God hath grasped the most trustworthy hand-hold, that never breaks, and God heareth and knoweth all things” (Surah 2:256).

Scholars debate whether Muhammad was a power-hungry warlord or if his actions were within the bounds of the just war theory. Their views on this likely influence the way they interpret the events of Muhammad’s life, particularly the battles in which he was involved. Either way, the question remains: what is Muhammad’s legacy?What is Muhammad's legacy? #Islam Click To Tweet

Muhammad died in 632 when he was 62. Following Muhammad’s death, Muslims disagreed about who would take his place, resulting in the Sunni and Shia split, which remains today. The Sunnis believe that Abu Bakr, Muhammad’s good friend, was his successor, but the Shia believe Ali ibn Abi Talib led the Muslims after Muhammad’s death. Despite their disagreements, both groups prioritized Muslim expansion. In the next article, we’ll talk about the Shia/Sunni split, modern-day Islam, and how you can be in relationship with Muslims.

[1] The historical information below came from a few sources, including Winfried Corduan, Neighboring Faiths: A Christian Introduction to World Religions, 2nd ed. (Downers Grove, IL: IVP Academic, 2012), and Fritz Ridenour, So What’s the Difference?: A Look at 20 Worldviews, Faiths, and Religions and How They Compare to Christianity (Ventura, CA: Regal, 2001).

[7] For a very thorough discussion of the Constitution of Medina, I recommend
Saïd Amir Arjomand, “The Constitution of Medina: A Sociolegal Interpretation of Muhammad’s Acts of Foundation of the ‘Umma.’” International Journal of Middle East Studies 41, no. 4, 2009, 555–75. JSTOR, www.jstor.org/stable/40389306. Accessed April 22, 2020. This is a tad academic, but I like how Arjomand goes through the legal aspects of each article found within the Charter.

[8] Some of these battles are discussed briefly in Nabeel Qureshi’s book, No God But One, as well as Winfried Corduan’s book, Neighboring Faiths.  I don’t usually recommend Wikipedia, however, the articles on these battles are quite thorough, especially if you are looking for a brief overview of each. The references in the footnotes of each article will send you to a number of other sources. The Encyclopaedia Britannica also has some entries for these battles.

[11] See Chapter 38, in particular. For Nabeel, this was a difficult hadith to wrestle with, so he read a book Muhammad: His Life Based on the Earliest Sources (Rochester, VT: Inner Traditions, 2006) by Martin Lings, a student and close friend of C.S. Lewis who ultimately converted to Sufi Islam. He found Lings’s book (which I own and have read in piecemeal) to be an incomplete picture of Muhammad’s exploits. But one chapter, “The Threshold of War,” Lings seemed to indicate that Muhammad’s men had been the first aggressors against Meccans after Muhamad moved to Medina, and that entry encouraged Nabeel to continue searching for the whole story.

Lindsey Medenwaldt is Mama Bear’s Executive director and our resident expert on world religions. She is a perpetual student, so in addition to her M.A. in Apologetics and Ethics from Denver Seminary, she has a J.D. and a Master’s in Public Administration. She’s been married to another apologist, Jay (aka, the Psych Apologist), for 13 years, and they have three incredible daughters, ages 13, 10, and 7.