What Exactly do You Mean by “Legalism?” 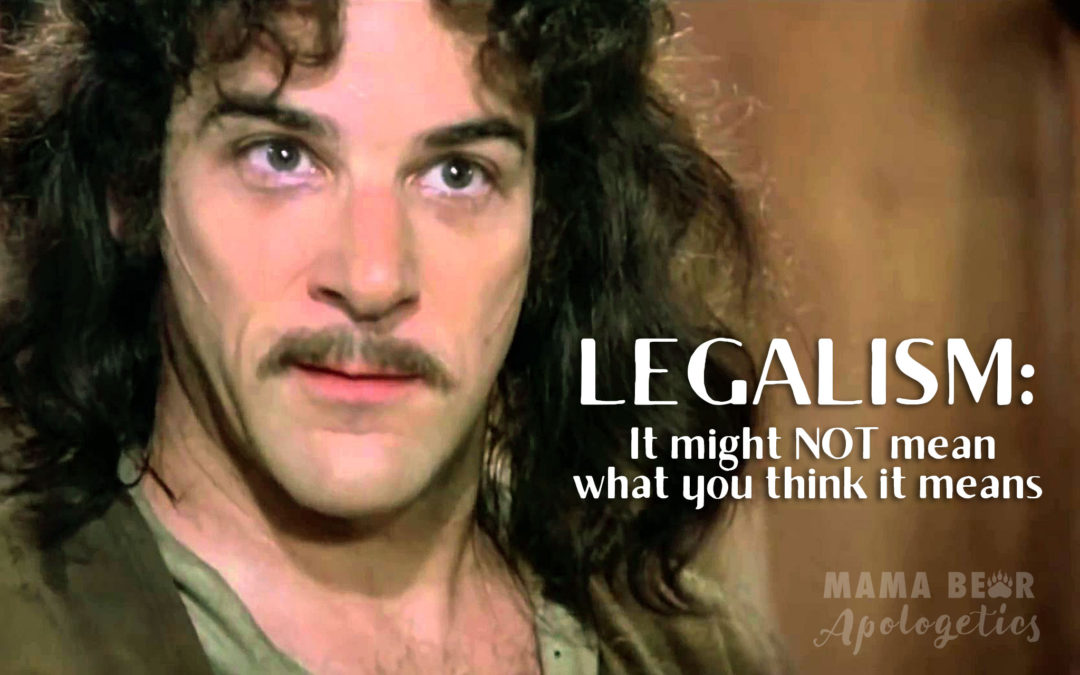 In editing the most recent podcast, I realized that Rebekah and I threw the word “legalism” around a lot but never really defined it. Since I grew up in the church, the lingo is second-nature to me and I forget that not everyone knows what we are talking about. So, as an addendum to the podcast, I thought it would be apropos to dissect what we mean by “legalism.”  Rebekah and I do not want to be accused of affirming something we are not.

The technical definition of legalism according to my favorite online dictionary is “Overly strict or rigid adherence to the law or to a religious or moral code.” In contemporary, grace-based American church culture, “legalism” is synonymous with “Phariseeism”, and Pharisees are seen as self-righteous enemies of the gospel.

The Pharisees were the Jewish religious leaders during the time of Jesus, and the people group with whom Jesus was harshest. Scripture depicts Jesus as speaking gently to the crowds, and “looking upon them with compassion, like sheep without a Shepherd.” (Matthew 9:36) However, Matthew 23 is basically one of the longest divine rants you’ll find outside of the book of Job. Here, Jesus lambasts the Pharisees, describing them as “whitewashed tombs” which look all pretty on the outside, “but on the inside are full of rotting bones.” (You don’t get pansy-slapped much harder than that by the Son of God.)

The Pharisees were obsessed with rules. To give you an accurate understanding of what modern Pharisaical rules would look like, check out the article here and scroll halfway down to read an excerpt from Yehoshua Neuwirth’s A Guide to the Practical Observance of the Sabbath. (There are rules for things like when you can and can’t squeeze a lemon: No into tea. Yes onto fish. Don’t ask me why.)

According to Jesus, with all their meticulous rule following, the Pharisees had forgotten the most important thing: pursuing the heart of God. Now to be clear, not all Pharisees were like this. There are Pharisees who were secret followers of Jesus, like Nicodemus. So what we can learn from this is that it is not “rule following” which is contrary to the heart of God. If you read the Sermon on the Mount carefully, Jesus actually called people to a higher standard than that of the Pharisees – even to perfection. Rather, it is a heart that is trying to be self-justified before God that is an abomination. Two people can be side-by-side doing the exact same thing, and for one it is legalism, and the other it is not. Click To Tweet

Legalism in its most sinful form is a works-based salvation, and Paul condemns it vehemently in the latter part of Colossians 2. The entire book of Romans (and a good chunk of Galatians) is devoted to parsing out the details of this radical new theology – the theology of salvation by grace alone. Adding works to Christ’s gift of salvation is essentially saying that his death and resurrection were not quite enough to pay the price for our sin. It’s like saying, “Thanks, Jesus. That was a great start, but we’ll take it from here!”

Scripture is clear, it is by grace alone that we are saved. However, it is easy to take the doctrine of grace and go in the opposite direction. Luckily, the writers of the New Testament were prepared for that as well. At the beginning of Romans 6, Paul corrects misguided zeal by steering their wild-child theology [libertine excess] into mature and measured liberty. What was their reaction to grace? Sin more because that shows how gracious God is! [Insert facepalm here.] This might sound like idiotic reasoning to us, but the funny thing about heresies is that they have a clever habit of recycling themselves in new and interesting ways.

In contemporary American Christianity, grace has been so perverted that some pastors will not even use the word “sin.” Take this megachurch pastor’s tweet for example: “Quit beating yourself up because you’re not perfect. It’s very freeing when you can be happy with who you are.” There is a reason his church has over 50,000 members. Who doesn’t love the gospel according to Stuart Smalley? (If you are under 35, it’s likely you won’t get that reference…)

Granted, there is some truth to the statement. We are not called to beat ourselves up. Some people don’t need any more help beating themselves up.  We are very clear about this in the podcast. And there is a semblance of Philippians 3:13’s “forgetting what is behind and pressing on towards what is ahead” in this tweet. However, the thing you are “pressing on ahead towards” isn’t some humanistic form of self-actualization – which is what most of this pastor’s books and sermons are about. We have to keep in mind the rest of the Colossians 6 where Paul describes why he is not allowing himself to be encumbered by past mistakes: so he can keep seeking Christ, and running as if he were in a race to win a prize.

This, my dear Mama Bears, is what “legalism” can sound like to some people. If Paul were alive today, he probably would have been accused of legalism. But pursuit of purity out of a sincere love for Christ is not the “bad kind” of legalism. Neither is avoiding certain things because you’re not really sure what counts as sin and what doesn’t. (Better safe than sorry according to Romans 14.) Following extra rules because you know your personal areas of weakness? Still not the bad kind of legalism. (See point #5 on my previous article.) In short, don’t be quick to condemn someone who sets up lots of rules for themselves as Pharisaical legalists. Chesteron is credited as saying “Don’t tear down a fence unless you understand why it was put there in the first place.” There’s wisdom to that.

Our call to wisdom is reflected in the simple fact that two people can follow the exact same set of rules and for one, it is an unhealthy self-righteousness condemned in the first half of Philippians 3, and for the other, it is a rightful pursuit modeled in the second half of the chapter. The same God who calls us to perfection also calls us to rest in Matthew 11:28-30. This is the classic tension between liberty and legalism. As my pastor used to say, the heart of the matter is the heart. And another’s heart, dear friends, we do not have access to. Only God does.Legalism is not defined by outward actions, but rather by inward motivations. Click To Tweet

To listen to further discussion on the subject, check out our podcast on Resolutions and Legalism – an Intro to Jonathan Edwards. Hopefully this blog gave you a better understanding of the relevant background information.

And if you’re still scratching your head over my Stuart Smalley reference, here ya go… ya young whipper-snapper.