What do Muslims Believe? A Crash Course in Islam 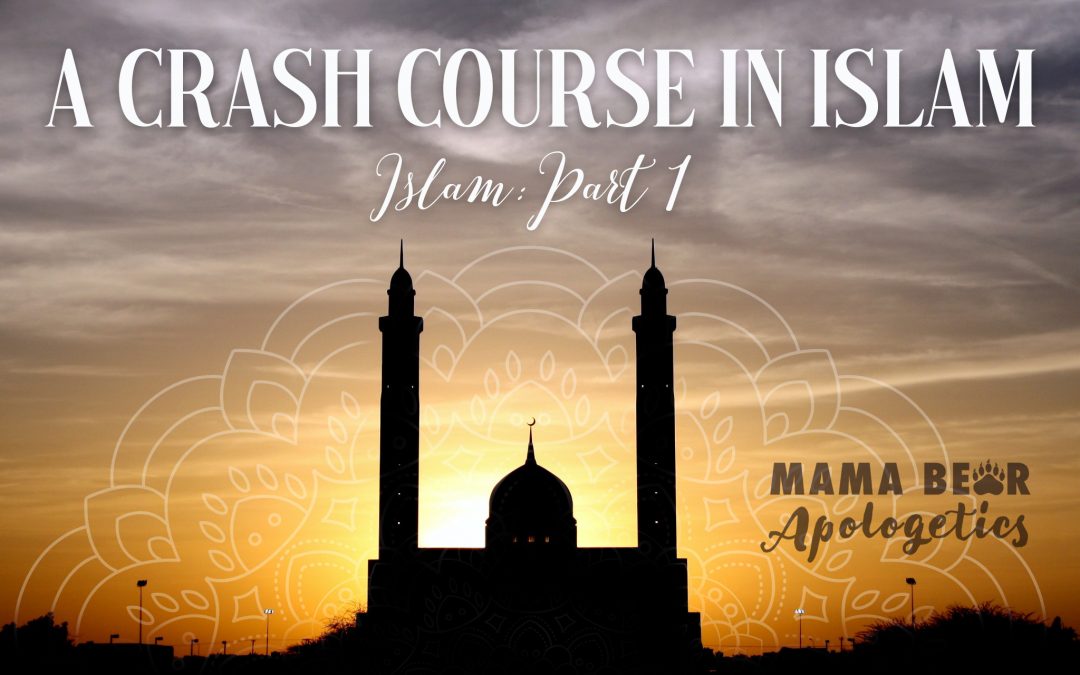 Writing about Islam can be difficult because there is tension between being honest about its history while still being respectful to those who practice it. I want to make sure I’m giving you a good foundation for understanding Islam so that you can answer any questions your kiddos might have about the religion and its followers. I also hope to clear up some common misconceptions about Muslims so that you can have even more information to help you begin to build bridges with your Muslim neighbors, friends, and acquaintances. Our goal is for understanding, for the purpose of building bridges. Click To Tweet

In addition to covering basic Islamic beliefs, I’ll talk about Muhammad in detail, including his willingness to use violence to expand Islam. We’ll also discuss whether all Muslims are violent. Like I do in nearly every article I write on world religions, I encourage you to be open-minded and willing to learn. We also need to approach it with gentleness and respect (1 Peter 3:15). If you’ve got a question about Islam, put it in the comments, and hopefully, we can add it to our Q & A article (the fourth article in this series on Islam).

A Crash Course in Islam

“What, then, does it mean to be a Muslim in the West? It can mean anything. If you really want to know what someone is like and what they believe, you have to get to know them and ask them personally.” Nabeel Qureshi (Christian apologist who converted from Islam)1Nabeel Qureshi, Seeking Allah, Finding Jesus: A Devout Muslim Encounters Christianity (Grand Rapids, MI: Zondervan, 2016), 82.

Before we dive in, I want to clarify that not all one billion Muslims across the planet believe the same things. There are two main sects of Muslims, the Shias and the Sunnis (both are discussed below). This is one major reason why it’s so important to ask your Muslims friends what they believe, rather than just assuming that you know what they believe based on this overview article. I’ll do my best to clarify some of the differences between the Shias and the Sunnis, but asking Muslims what they personally believe is always the best route to go.

Islam means submission, and Muslim means one who lives his life according to God’s will. So, being a Muslim essentially means being willing to submit your life to God’s will. But, what do Muslims need to do in order to achieve that?

Islam is a works-based religion (Surahs 5:9 and 42:26), meaning that Muslims need to perform certain things in order to have the potential of going to heaven when they die. I say “potential” because even if they accomplish all of the tasks, Muslims are still at the will and mercy of Allah, and Allah can still choose to send them to hell, even if they thought they lived a perfect life on earth. Muslims are encouraged to repent constantly. Muhammad apparently repented 100 times per day (Ṣaḥīḥ Muslim 2702)!

What do Muslims believe?

Muslims primarily use the Qur’an as their holy book, but also refer to the hadiths for guidance. The Qur’an is believed to have been dictated to Muhammad by the angel Gabriel and written down in Arabic. It has 114 sections (called Surahs), which give Muslims guidelines for how they should live. The hadiths are a collection of Muhammad’s sayings and descriptions of his religious practices.

In addition to knowing the Qur’an and hadiths, Muslims must believe six basic doctrines and practice the five pillars of faith, which are duties that Muslims must perform in order to show that they are committed to Islam. In addition to these pillars, Shia Muslims have other Ancillaries of the Faith they must keep, like jihad and a religious tax paid annually to their imam.2Gibney, Ed, Evolutionary Philosophy (Lulu Press, 2012), 110-11, https://books.google.com/books?id=PiKyAwAAQBAJ&pg=PA110&lpg=PA110&dq=Ancillaries+of+the+Faith+salat&hl=en#v=onepage&q=Ancillaries%20of%20the%20Faith%20salat&f=false. For purposes of this article, we won’t get into all of the doctrinal differences between the Shia and the Sunnis, but to keep it simple, remember that Shia have more rules than Sunnis. Most Muslims today are Sunni, the branch with fewer rules. Ever wondered what Muslims believe they must do to be saved? Click To Tweet

With that in mind, let’s talk about their core doctrinal beliefs.

1. Allah is the one, true God. Allah is the supreme, all-knowing, all-powerful being. Muslims do not believe in the Trinity. (Surah 5:73)

2. Angels and spirits exist. Gabriel is the head angel and the one who appeared to Muhammad in a cave. Shaitan is the supreme fallen angel (that name sounds a lot like Satan, right?). (Surah 2:97)

3. The Qur’an is the only trustworthy Scripture. Although Muslims believe that the Torah, the Psalms of David (Zabur), and the Gospel of Jesus (Injil) are Allah-inspired, they think that Christians and Jewish people corrupted them. Therefore, Muslims rely on the Qur’an as the only uncorrupted text. Interestingly, some Muslims believe they are only supposed to read the Qur’an in Arabic, which can be especially difficult for Muslims raised in the West who may not learn Arabic as children.

4. Belief in the Prophets; Muhammad is the greatest prophet. Muslims believe that Allah has given us His will throughout time by way of prophets. Some of their prophets will sound familiar to you: Adam, Noah, Abraham, Moses, and Jesus. As for Muhammad, he is the last and the greatest of the prophets.

5. Allah decides who goes to heaven and hell. There will be a day of judgment (Surah 3:30).

6. “If it is Allah’s will.” No one can change anything that Allah decides. His will is final.

The Five Pillars of Islam are:

1. Public profession of faith. “There is no god but Allah, and Muhammad is the prophet of Allah.” (Shahadah) The first thing a baby born into a Muslim family will here is the Shahadah, and it will be the last thing they hear before they die.

3. Almsgiving for the poor, widows, orphans, or the sick

4. Fasting for one month out of the year, during daylight hours. This is called Ramadan.

5. Pilgrimage to Mecca (though there are exceptions for those with disabilities).

What are some common misconceptions about Muslims?

Misconception 1: All Muslim women wear a burqa. A burqa (burr-kah) is a head-covering that devout women primarily in the Middle East wear. It covers everything, even the eyes (with a thin veil). You might also see Muslim women wearing a niqab, which covers everything except for the eyes, or a chador, a full cloak that some Muslim women wear in the Middle East. Most Muslim women, though, wear a hijab, which is a scarf that covers a Muslim woman’s hair, ears, and neck. So, although some Muslim sects believe it is a requirement that Muslim women wear a niqab (e.g., the more conservative Salafi sects of Muslim), most Muslims believe a simple head covering like a hijab is acceptable. Ultimately, the Qur’an simply requires that a woman dress in a way that does not draw attention to her beauty (Surah 24:31). Men also have to be modest, and they can’t show any skin above the elbows or knees.

Misconception 2: Muslims don’t believe in Jesus. It depends on what you mean by that. Muslims don’t believe Jesus was the Son of God (Surah 9:30) or divine (Surah 5:17); they think he was a prophet and teacher. They do believe that Jesus was born of a virgin and that he performed miracles, but not that he died on the cross or was resurrected (Surah 4:157).

Misconception 3: Muslims believe Mohammed was God. Jesus and Mohammad are not parallels in Islam and Christianity. Muslims believe Allah alone is God and that Muhammad was the greatest prophet (yes, they believe he was a greater prophet than Jesus). You might also be interested to know that Muhammad never claimed to be divine, but only to be a prophet of Allah. He did not accept worship or claim to forgive sins like Jesus did, which are divine claims.

Misconception 4: All Muslims are violent (or in the reverse, all Muslims are peaceful). Just like any religion, there are violent members and peaceful members. (Just think of the blight that Westboro Baptist Church brings to the Christian name.) Making blanket statements like “All people of one religion are X, Y, or Z” is just lazy. How many times have we rolled our eyes at atheists describing something unattractive that “all Christians” are? (e.g., All Christians are judgmental hypocrites.) Lumping any group of people into one characteristic doesn’t benefit anyone. Are there violent Muslims? Yes, but the topic calls for a much lengthier discussion than a simple yes or no. Because of that, we are going to tackle this really important issue in our next couple of articles.

Misconception 5: All Muslims believe the same thing. This one should be obvious since even Christians don’t all agree on everything. Just like in Christianity, not all Muslims believe exactly the same thing. And just like different denominations in Christianity, Christians interpret passages in the Bible in different ways (all seeking to avoid heresy, I hope), Muslims, too, have differences of opinion about the Qur’an.

What Can Christians Learn from Muslims?

Piety. Most Muslims are pious, considering they are required to pray five times a day and fast for an entire month (during daytime hours) once a year. Muslims are also encouraged to study and memorize the Qur’an. Wouldn’t it be amazing if Christians took prayer, fasting, and Bible-reading/memorization as seriously? Wouldn't it be great if Christians took prayer, fasting, and Scripture memorization as seriously as Muslims do? Despite our irreconcilable differences in beliefs, we as Christians can still always learn from others. Click To Tweet

Modesty. This is a tough one in an age of flesh-colored leggings and teeny-tiny bikinis, but Muslim women can be admired for their modesty. You won’t find most Muslim women in booty shorts or crop tops because the Qur’an forbids them from showing their beauty to anyone but certain men, like their husbands and sons (Surah 33:59). This is why most Muslim women wear a hijab or burqa in public (or even when other men are visiting their home). Some Muslim women are working to change the perception about modest clothing. In fact, a few years ago, there was a Muslim woman, Ayana Ife, on the TV show Project Runway, a show about clothing designers. Her goal was to show how one could be both fashionable and modest. She was even a finalist on the show–bravo to her! Her clothes were beautiful.

So, I hope this gives you a good introduction of what Muslims believe and that I’ve dispelled some of the most common myths you may have heard. In my next article, I will talk about Muhammad and the birth of Islam. Please let me know what you want to know about him in the comments below.

Special thanks to my friend from law school, Rokhsareh Vahid, who read this article to ensure I was accurate about Islam and the Muslim people.