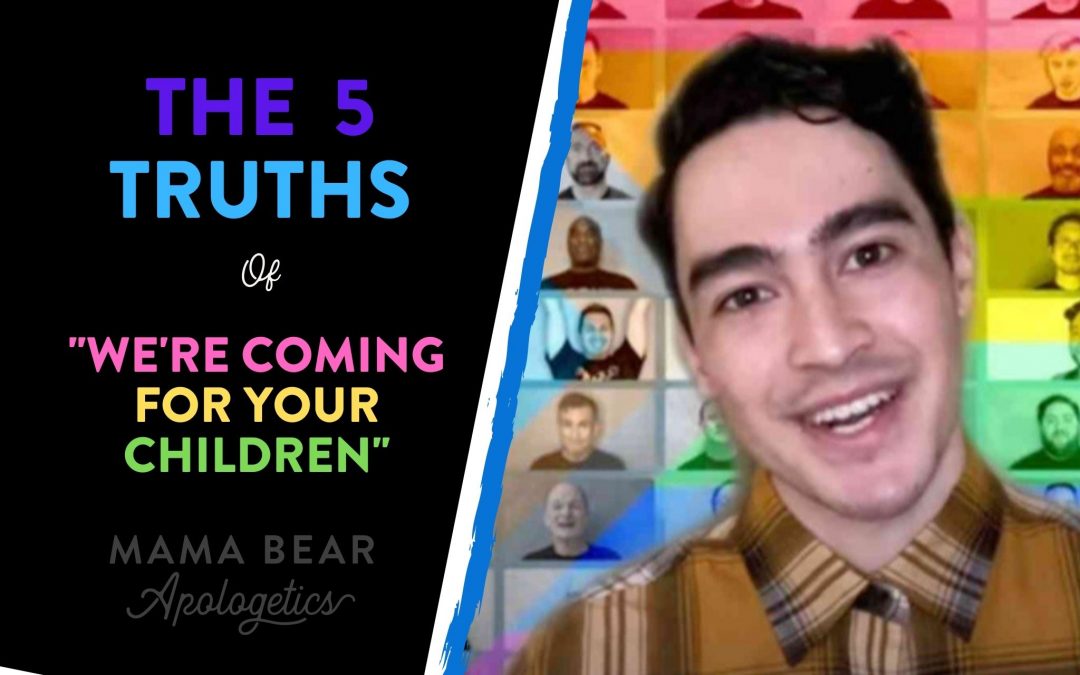 Boy-howdy, satirical music is really cheesing off the masses this past month! Just after posting an article roaring through Matthew West and the modesty debate (you can read it here), another tongue-in-cheek ditty decided to kick up a fuss. Only this one was by the San Francisco Gay Men’s Choir (SFGMC).

In a Broadway-esq ballad that aired in support of Pride Month (June), “We’re Coming for Your Children,” the announcer/soloist cheerfully shares that they have a message for anyone against LGBTQ equal rights: They’re coming to convert your children!

You gotta love their subtly.

This went over about as well as when your husband tries to convince you to trade in the family minivan for a Harley. (Or was that just mine?) The video only managed to scrape a meager 88 likes (and more that 5,000 dislikes) before it was removed from YouTube altogether.

When people understandably flipped out, the SFGMC assured everyone that this song was just a musical joke that fell flat and that all the outrage was really just the alt-right taking their lyrics out of context to further victimize and hinder LGBTQ progress.[1] It wasn’t because they actively sang about coming after your kids and then you! No no, that part was just a misunderstanding.

I hopped on and listened to the song for myself,[2] and let me tell ya, for a song that’s supposed to be fictitious, there’s a whole lotta truth in it. (You can see an archived video along with a transcription of the lyrics at the end of this post.)

Since equality is what is asked for, let’s evaluate this song with the same charity we extended Matthew West. We will be fair. We will accept the good and reject the bad (what we here at Mama Bear call the chew-and-spit method). We will extend grace where grace is due. But you can bet we will stand firm in truth because as our Mama Bear motto states: when you come after our kids you can bet we will demolish your arguments. But don’t worry, you won’t catch me singing the response. Unless you want me to…

Children are ideal converts because most haven’t been taught how to think critically about the messages they’re viewing. Without religious “biases,” children will accept just about anything, like the family with two dads which made an appearance on Sesame Street this past month.[5]

Yes, children and adults should know that different expressions of sexuality (and types of families for that matter) exist. They should also know how to treat them with respect as fellow humans. But this isn’t the real issue.

The real problem is that the goal of the LGBTQ agenda is to have kids believe that all forms of sexual expression are morally good in spite God’s clear design. If kids aren’t taught this from an early age, the song won’t need to convert your kids, they’ll already have them.

#2 “…It happens bit by bit, quietly and subtlety and you will barely notice it”

If I could ‘amen’ an aspect of the song, this would be it. Not because I like it, but because it’s scary accurate. Over the past few years, LGBTQ themes have been trickling down from teen and adult media into popular kids programming and products. Child characters are exploring bisexual lifestyles, asking to be identified by they/them pronouns, or dancing around pride flags.[6] Some of these occurrences are so quick you would miss them if you weren’t attentively watching it with your kiddos.

The reason for this steady stream of LGBTQ+ material is in part normalization. Normalization is when something that used to surprise you barely makes a blip on your radar–especially when it comes to morality. In some ways, this can be a good thing. Jesus wasn’t shocked when He found himself constantly surrounded by sinners. Nor did He fake a “disciple meeting” when the tax collectors invited Him to lunch. Nope, He knew sin was ‘normal,’ which is why He went to the cross.

The problem with our culture’s goal of normalization is that it’s trying to numb our kids to the existence of sin so that they’ll eventually see it as no big deal.[7] Which is exactly why the song joked that, “Gen Z is gayer than Grindr.”[8]

Folks, Romans 1:18-32 was meant to be a warning, not a how-to manual. We need to maintain a proper view of sin if we are to be effective for the Kingdom. Yes, sin is common (normal) to everyone, but that doesn’t mean it’s no longer sin (Romans 3:23-24). Our kiddos need to be familiar enough with the world that they aren’t dumbstruck when it marches through your city next June. They also need to be gentle enough to know that though we’re all lost, all of us are worthy of redemption (Matthew 5:13-16, 2 Timothy 2:25). Let’s equip them to speak life, shall we?

This is what the soloists were excited for when they sang about how you can’t keep your kids from LGBTQ information. They’re totally right of course, but just because something is ‘information’ doesn’t make it truth. This distinction is super important given that many millennials and even more of Gen Z-ers have bought into the postmodern teaching that what’s ‘true’ is different (and even contradictory) for each person.[10]

One of the greatest skills we can impart in our children is critical thinking.[11] If your child has a postmodern view of truth, they won’t critically evaluate what they read, watch, or hear. (Judges 17:6) Everything will just get tossed on the ‘truth’ pile of tolerance as they head off to those discos we read about earlier. If we want our kids to stand firm for truth, we need to be proactively evaluating the arguments of the LGBTQ agenda while helping our children see that Christianity cherishes the whole person.

#5 The Person Behind the Hurt

There’s been tons of fallout from this video. What I haven’t seen is a lot of compassion for the hurt that helped motivate its release. You get a glimpse of it in the song. When the soloists complain about being seen as ‘not respectable,’ they’re touching on the loss of dignity they feel when the sum total of their identity is hinged on their sexuality. What they don’t realize is that the LGBTQ agenda is doing the exact same thing–defining them by their sexuality.

Embracing one’s sexuality is seen as embracing one’s “true self”. This isn’t just an identity claim. This act simultaneously drives a wedge between them and the Savior who offers true redemption, love, and community. This same Savior, by the way, calls everyone to submit their bodies to the cross, not just LGBTQ folks.

It’s time the church starts acting like the church: a place of healing and refuge for all who seek redemption through Christ. I’m not excusing the activist’s real attempts to lead children (and adults) astray from Biblical ideals and morality. I am saying is that they are worthy of the same grace that Christ extends you and me. Let’s start ministering like it.

But take heart dear one! We have an amazing resource coming to you this October! Hillary and I have spent the last year writing our next book, The Mama Bear Apologetics Guide to Sexuality (available for pre-order now!). In this book, you’ll come to better understand the sexual agenda, the linguistic theft of words like equality, how it’s reaching your kiddos, and how to stand firm in the faith.

As we get closer to the launch date, you’ll see more blogs touching on all the things we didn’t get a chance to cover in the book. So you’ll want to stay tuned! Till then, remember Mamas: Christ has overcome the world and His power lives in you.

Have questions or comments about this blog? Let us know below!

But you’re just frightened
You think that we’ll corrupt your kids
If our agenda goes unchecked
Funny, just this once… you’re correct.

You can keep ‘em from disco
What about San Francisco?
Make ‘em wear pleated pants
We don’t care
We’ll convert your children
We’ll make them tolerant and fair

(talking) At first, I didn’t get why you’d be so scared of us turning your children into accepting, caring, people… But I see now why you have a problem with that.

Just like you worried, they’ll change their group of friends
You won’t approve of where they go at night (To Protest!)
Oh and you’ll be disgusted (So gross!)
When they start finding things online that you’ve kept far from their sights (like information)
Guess what? You’ll still be alright!

We’ll convert your children (Yes we will!)
Reaching one and all
There’s really no escaping it
Cause even grandma likes RuPaul

And the world’s getting kinder
Gen Z’s gayer than Grindr
Learn to love, learn to vogue, face your fate
We’ll convert your children
Someone’s got to teach them not to hate

But you don’t have to worry.
Cause there’s nothing wrong with standing by our side
Get onboard in a hurry
Because the world always needs a bit more pride

[2] Which has since been removed from YouTube but can be viewed (commentary not strictly endorsed by MBA) here https://notthebee.com/article/the-san-fran-gay-choir-says-its-coming-to-convert-our-kids.

[4] It was detailed in the article “Overhauling of Straight America,” which you can read here: http://library.gayhomeland.org/0018/EN/EN_Overhauling_Straight.htm

[5] Which is what folks like Christy Tirrell-Corbin, executive director of the Center for Early Childhood Education and Intervention at the University of Maryland, praised about Sesame Street presenting a family consisting of two dads on Sesame Street.

[6] Those shows include: The Loud House, Craig of the Creek, Blues Clues, and countless more. We polled our fellow mama bears on our Facebook page, and within an hour we had over 150 comments listing shows presenting these exact themes.

[7] More formally, it uses the normative claim, this exists, to justify the moral claim: this is good. But the existence of something doesn’t always mean that it’s a good thing.

[8] Grindr is an LGBTQ dating (and hookup) app. This isn’t accurate, of course. However, Gen Z is the most accepting of the LGBTQ agenda compared to previous generations. Why? Because they have been targeted most aggressively by the postmodern teaching if it feels good, do it! lurking behind normalization efforts.

Postmodernism, if you recall from Hillary and Rebekah’s chapter in the first Mama Bear book, preaches in part, that whatever you feel is normal. If it’s normal, then it is good. And if it’s good, it should be tolerated and advocated for as well! To include parades of course!

[9] I wrote a blog on the dangers of this in “Confessions of a Former Christian Snowflake,” which you can read here: https://mamabearapologetics.com/confessions-of-a-former-christian-snowflake/

[10]  Nancy Pearcey, Love Thy Body (Grand Rapids, MI: Baker Books, 2018), 163. It’s also primarily based on what you feel. The sum total of your identity is also based on what you feel, not on anything objective like your body, aka biology. There’s a whole chapter on postmodernism in Mama Bear Apologetics.

[11] They need to ability to hear a claim and be able to recognize what is claims are being asserted, which terms have been linguistically thefted, and tell the difference between an actual argument and an appeal to emotion. Elizabeth Urbanowitz has a curriculum which does exactly this. Please see www.foundationworldview.com for more information!