Two Questions EVERY Christian Should Ask Before Tackling LGBTQ+ issues 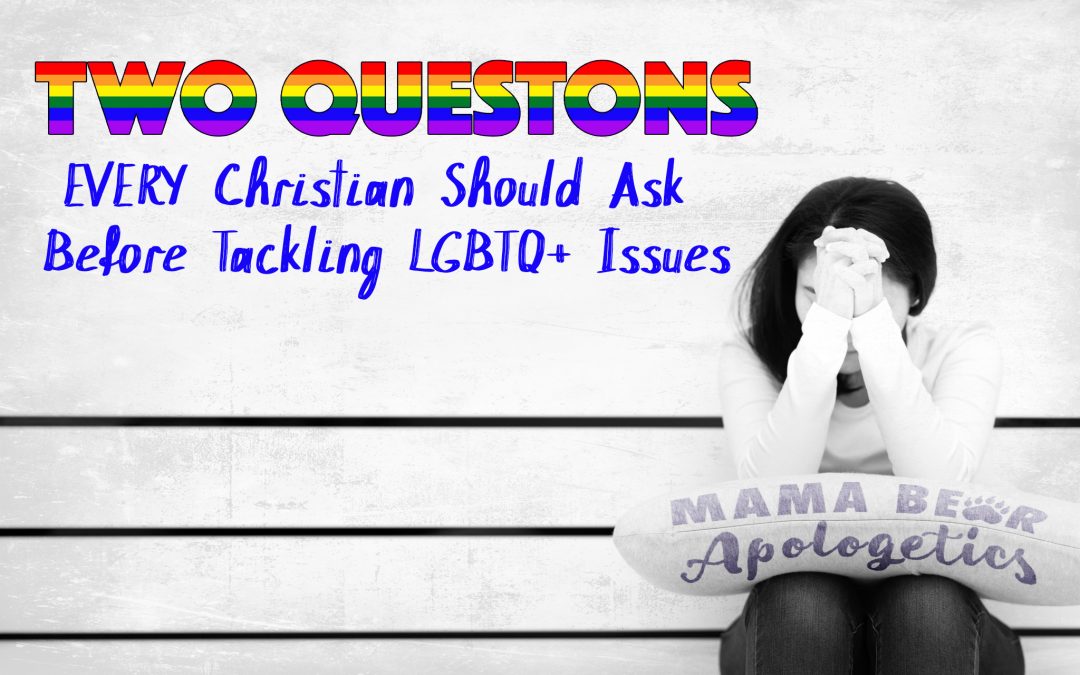 There are certain areas in human existence where the demons of condemnation love to hover. Identity is one of those areas. That is what we see when Satan comes to tempt Jesus before He starts His ministry. What does Satan ask all three times? “If you are the son of God…”

How should we approach this topic?

The first time the Lord impressed this upon me was before I gave a lecture on the youth exodus. The week prior, a close friend called me to tell me that her son had just announced that he didn’t believe in God anymore. He was eight. I cried that night because the lecture just became that much more personal to me. I knew I needed to make some changes. The content didn’t change much, but the intro sure did. I needed a reminder that I was not just talking about statistics. I was speaking to a roomful of parents, some of whom were in great agony and self-condemnation wondering what they had done wrong. Truth is not to be used flippantly nor as a weapon.

Bringing it back to the current topic, a few years ago, John and I did a series for our church regarding Christianity and homosexuality. The week before our talk, one of the college campus leaders whom we adored left the church to pursue a same-sex relationship. I cannot say enough good things about that person. Her heart for God was always evident. She had a willingness to pray with others at the drop of a hat that was unparalleled. A spirit of love was one of her defining characteristics. You would be hard pressed to find someone who pursued people to show them the love of God more than this girl. And then she left the church a week before the talk. Our talk got real, real fast. It again reminds us that we are not just to be lobbing truth bombs over a protected fence of self-righteousness, letting them fall where they may and declaring “The word of God will not return void!” We have to remember that behind the issues surrounding Gay Pride month are real people, with real hurts, who have probably experienced real suffering. Click To Tweet

Why does this topic matter so deeply?

Because our sexuality is a big deal. I have witnessed close friends enter into sexual sin and whose relationship with God never fully recovered.

The best book I have ever read on sexuality is Sex and the Supremacy of Christ. In this compilation book, John Piper quotes the author Bruce Marshall. “The young man who rings the bell at the brothel is unconsciously looking for God.” What Marshall saw – and what few are acknowledging – is that there is a deep connection between God and sex. Piper later quotes Peter Kreeft saying “sex is the effective religion of our culture. . . Sex is like a religion not only because it is objectively holy in itself, but also because it gives us subjectively a foretaste of heaven, of the self-forgetting, self-transcending, self-giving that is what our deepest hearts are designed for, long for and will not be satisfied until they have.”

Since being married, I have watched this thesis play out on a variety of stages. I have had close friends who were dedicated to chastity, and Christ, and missions, finally get old enough to where they were just tired of fighting sexual temptation and gave in. And I’ve watched it destroy them. I’m not talking about rampant promiscuity. Anything that is outside the bounds of a biological man and woman joined in marriage is a deviation in our sexuality. We cannot engage in it and have our perception of God remain unscathed. I’ve seen this play out a hundred different ways with a hundred different people. There is no doubt in my mind that Piper’s thesis is absolutely correct.

So all this to say, our view of sexuality matters.

How do we approach people with same-sex attraction?

Again, bringing it back to our current discussion, what do we do with those who struggle with same-sex attraction? After all, in light of the quote by Kreeft, how do we deny someone the possibility of ever experiencing that “self-forgetting, self-transcending, self-giving experience” knowing that their heart is constantly longing for it? For the heterosexual singles, we can at least give them hope that it is possible. We are telling the person with same-sex attraction that there is no hope of them ever experiencing this in a way that honors God. Do not underestimate the pain that such a statement causes. We cannot back away from God’s word, but we need to understand what we are essentially telling the person who believes that same-sex attraction is their identity.

If same-sex attraction is not something you have ever struggled with, have you ever fully put yourself in a struggler’s shoes? Do you know what it’s like to long for something, created by God, that is supposedly a window into heaven itself, and be told that you are not allowed to experience it? Have you ever really tried to understand the longing, heartbreak, and loneliness that go along with someone who struggles with same-sex attraction, or have you been content to just say “The Bible says it, I believe it, that settles it,” and go on with your day? Have you approached this issue as a clanging gong, all truth and no love?

Perhaps you are keenly aware of the struggles of those with same-sex attraction, and you have empathy, and mercy to their plight. You probably see the people who behave like those in question #1, and are trying to repair the damage that has been done under their loveless banner of “Biblical truth.” You’re doing your best to bring the love of Christ to a demographic who has been largely used as a scapegoat by the church. In doing so, however, do you find yourself tempted to support the LGBTQ ideology and actively champion for same-sex relationships? If so, what will your reaction be if, in studying Scripture, it does seem to say that same-sex relationships are not part of God’s design? Are you willing to tell God that you are more merciful and more loving than He is? What if it’s true that a distortion in our sexuality will necessarily lead to a distortion in our ability to see God? Are you willing to stand before God and say you helped someone stay in bondage to a distorted view of Him when it was His desire for them to walk in Freedom?

These two questions represent the false dichotomy that we as Christians often believe are our only choices. And as much as we desire to do both–to embrace the Biblical truth of #1 while still having the demeanor of #2’s compassion, balancing these two important facets will always be a struggle. The firestorm surrounding gender and identity is speeding up and not slowing down, and as such Mama Bear Apologetics feel a burden to start addressing these issues. But I will say this now: there will not be a single article that we post that we do not link to this article first. I implore my fellow brothers and sisters to develop a similar approach. We want to be the aroma of Christ, not the stench of self-righteousness. I normally don’t pray on a blog, but I will pray this time: Lord, forgive us for the ways that we have erred on either extreme and please show us how to navigate this issue in a manner that is honoring to You, and in a manner that changes hearts and minds. Our goal is not just to be heard. Anyone shouting can be heard. Our goal is to be understood and persuasive. Please lead us as we try to be salt and light within an issue causing such damage to society and to our kids’ sense of identity. In your Holy name, Amen.