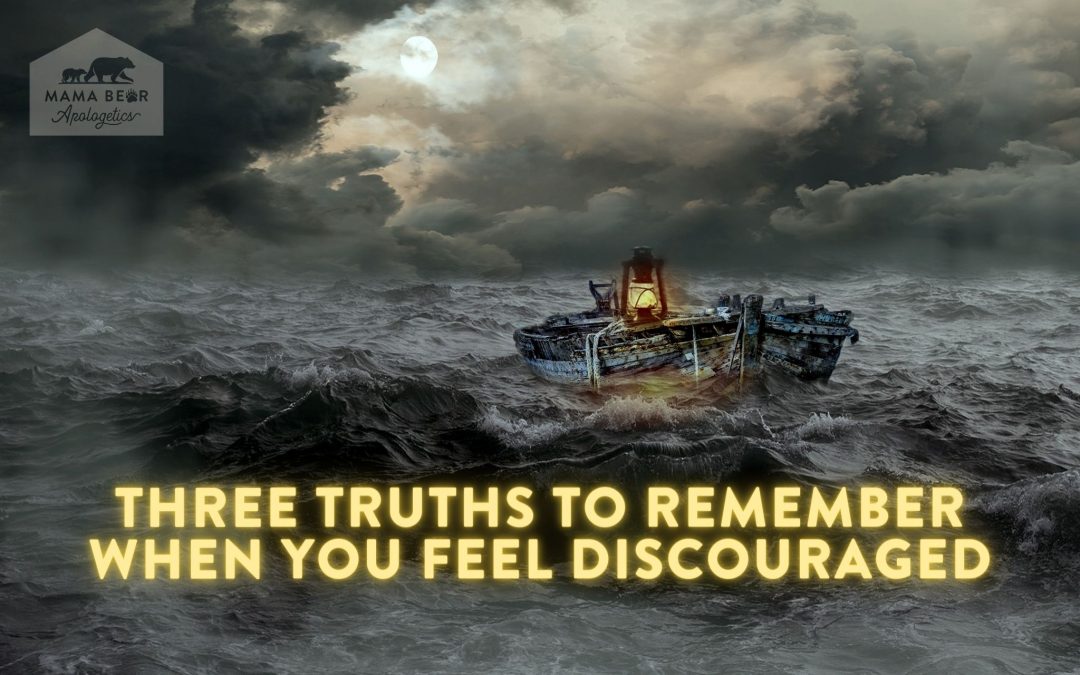 I don’t live my life super publicly, but neither am I overly private. John and I joke that if my mouth doesn’t say it, my face will. And in this new world of communication — screens, social media, etc. — if my mouth and face are saying it but there’s not enough discussion for my liking, then my posts will say it, too. Anyone else? No? Just me?

If you’ve been feeling a bit broken lately, you’re not the only one. But what do we do? It can be easy to feel overwhelmed, but Mama Bears, we cannot give in! We cannot become jaded and we cannot despair. And when we are tempted to, it would behoove us to remember a few important truths.

1. This world is not our home

Often when we experience negative emotions, we are so focused on figuring out what is wrong with us that it might not occur to us that our nagging feelings of sadness might be pointing to something right in us, namely a visceral, emotional knowledge of the truth — the truth that We. Are. Not. Where. We. Belong.

We don’t have to be comfortable. A Christian worldview predicts that we will be decidedly uncomfortable. Until then, we pack light and hold things loosely because everything we need is waiting for us… at home — where moths and rust cannot destroy and where thieves cannot break in and steal (Matthew 6:20).

There are two equally destructive polarities to which we can be tempted. On one extreme, we might be unwilling to take on any Christian responsibility. But on the other extreme, we can take on too much responsibility. Work is a gift. Ministry is gift! Motherhood is a gift! But what starts out as a fun adventure in ministry or motherhood can quickly devolve into an albatross around our necks whereby something goes wonky in our brain and we suddenly assume that everything is resting on our own puny little shoulders.

And while I don’t wish it on anyone, there’s no better reminder that we are not the Big Kahuna than being completely incapacitated and discovering that everything is still okay. Sometimes we need the reminder that it is not our talents that God wants. It’s our willingness to follow Him. He can do more out of two wobbly steps taken in weakness than from an entire marathon run in our own strength. The Jesus who calls us to labor in prayer, discipleship, and evangelism is the same Jesus who can easily bypass all our efforts and just go straight to people through dreams and introduce His own dang self.[1]

So don’t get me wrong, there’s lots of stuff to do and so many ways to be included in God’s amazing mission here on earth. But at the end of the day, He’ll get what needs to be done, done — with or without us. He loves including His children in His work, but He doesn’t need us. And there’s something freeing about that.

So, let’s release control and take pleasure and joy in the tasks that God has put before us. But don’t get sucked into the vortex of discouragement by thinking that the results are up to you. They aren’t. Rejoice that they aren’t.

I think this is one of the enemy’s easiest tricks. We live in one of the most “connected” times in history, and yet — for all our connections — we still feel alone. This feeling is especially acute when we also feel like we are in a spiritual battle. It’s like someone drops a nugget of exploding darkness and suddenly we can’t see where we are or who is around us. Hebrews 12:1 says “Therefore, since we are surrounded by such a great cloud of witnesses, let us throw off everything that hinders and the sin that so easily entangles. And let us run with perseverance the race marked out for us.”

That’s what I did this weekend. I felt beat down and discouraged, so I got on social media and askedpeople to share their stories of triumph. And you know what I found out? There are marriages that are healing. There are prodigals who are returning. There are atheists who are converting. There are addicts who are worshipping. Cultural lies are toppling and truths are prevailing.

Despite anything else that is going wrong in our world, God is still moving. Which victories are you choosing to focus on?

[1] In case you weren’t aware, there are a ton of stories of Muslims converting to Christianity after dreams of Jesus!