Three Things That Can Crumble a Faulty Christian Worldview – Part 1 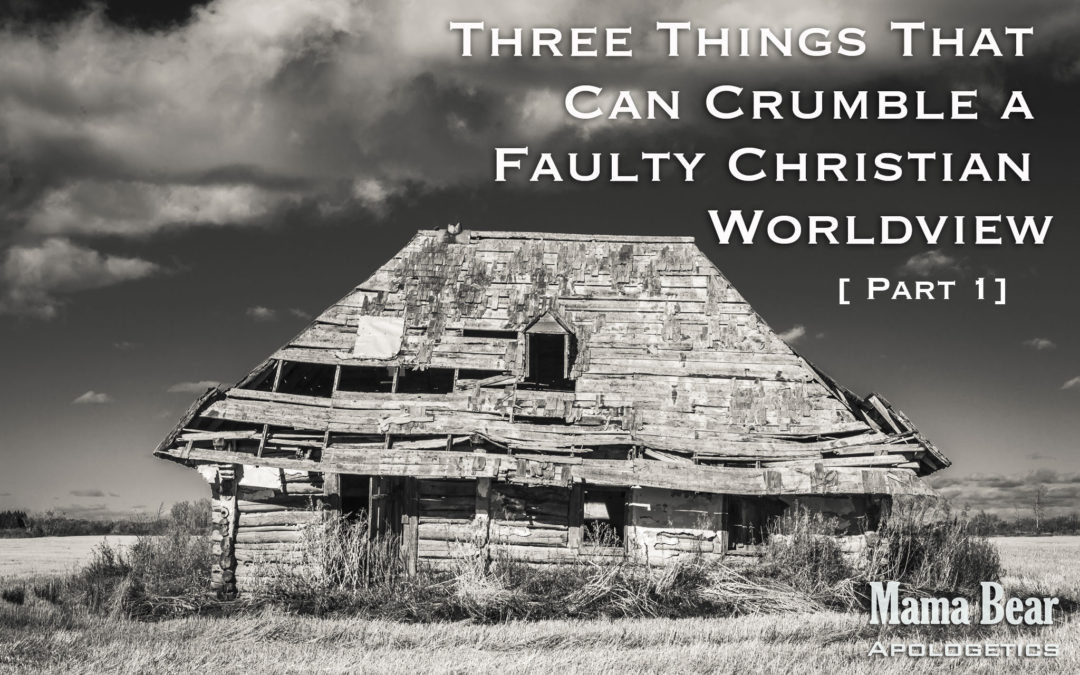 Our homegroup was talking about the passage in Matthew where Jesus cautions the multitudes to build their homes on the rock and not the sand. One of the study questions we asked the group was, “What is the difference between rock and sand?” The Sunday School answer is of course “Jesus,” but what exactly does that mean? The KKK and Westborough both claim to follow Jesus. When people say, “Don’t give me all that theology/apologetics, just give me Jesus,” I cringe. Why? Is Jesus not enough anymore? Nope. The problem is that people can’t even know the real Jesus sometimes without all that messy theology and apologetics. So we wanted to go deeper. What does it mean for Jesus to be the rock? One woman’s answer sparked an entire discussion. “It’s the Christian worldview” she said.

The first words that came to my mind were “coherent and incoherent.” Now first, let me explain what I mean by that. For the normal person, coherent and incoherent simply means understandable or nonsense. Scientifically, the definition can be broader, and refers to how closely particles adhere to one another. SO, being a science nerd, when I pictured the difference between rock and sand on a physical level, it was in relation to structure (i.e. how closely connected are the individual pieces.) The grains within a rock fit together, and they cohere to one another (i.e. they are coherent). They move and act as a unit that cannot be broken apart without significant effort. Grains of sand do not normally cohere to one another very strongly (i.e. they are incoherent). They can be picked apart and separated. No grain of sand has a significant bearing on another, and thus makes a horrible foundation. Theoretically, the grains of sand and the grain within a rock can even be made of the same substance chemically. The difference between the two is how the particles interact with one another.

Most people understand that Matthew 7 is not actually talking about rocks, sand and architecture. While we know Jesus is ultimately our foundation, it is assumed that this means that He will be incorporated into an individual’s foundational beliefs: her worldview.

“Worldview” is a term that is thrown around a lot, but many people don’t know exactly what it is. A “worldview” is simply the lens through which you see the world, and is the codebook by which you make sense of the world. A worldview is a person’s accepted rules of the universe, whether that be implicit or explicit. A person’s worldview not only tells her what is true and false about the world, but it informs her how tshe can know what is true and false in the first place. Is something true because I feel it? Does science have to show it first before I accept it as true? Worldviews are like personal scents – everyone has one, few are identical, and most people don’t know their own.

I realize this sounds abstract, so let me explain. An example of a contradictory (i.e. incoherent) worldview might be something like “People should decide what is true for themselves.” This is a popular one in our culture right now. Doesn’t it sound so niiiiice and tolerant? However, it is incoherent – it doesn’t hold together. How do we show that this worldview is incoherent? Because these same people will also get very angry when someone cuts them off on the freeway. They will react indignantly when a bully at school pushes their child. They may even say it is “wrong” for a Christian college to enforce spiritual disciplines. (Vote no to California SB 1146!) Such reactions show that the person doesn’t actually believe that “People should decide what is true for themselves.” Otherwise, they would accept the person on the freeway’s truth that they need to get to their destination faster. They would accept the truth that bullying is OK for some children. And they would accept that the administration at an overtly Christian college believes that it is important for the students under their care to learn to cultivate Christian disciplines.

Incoherence is not unique to non-Christian worldviews unfortunately. In fact, there are three main aspects that are left out of many Christian worldviews. This is one of the goals of apologetics: to refine one’s own foundation so that we can feel more confident that we are building on rock and not sand. The purpose of refining our worldview is not to have bragging rights to the most coherent worldview. I cannot stress enough that apologetics is not for apologetic’s sake. The purpose of apologetics is to prevent the devastation that comes when children encounter storms in life and discover that their “Jesus” foundation isn’t as strong as they thought it was – or worse – feel lied to. Is that a reflection on Jesus? Not at all. However, it can be a reflection on a faulty view of Jesus. In this blog series, I will try to help uncover three areas where we as parents (whether that be of biological, adopted, or spiritual children) need to help our kids incorporate difficult aspects of the Gospel into the Christian worldview: suffering, persecution, and doubt.