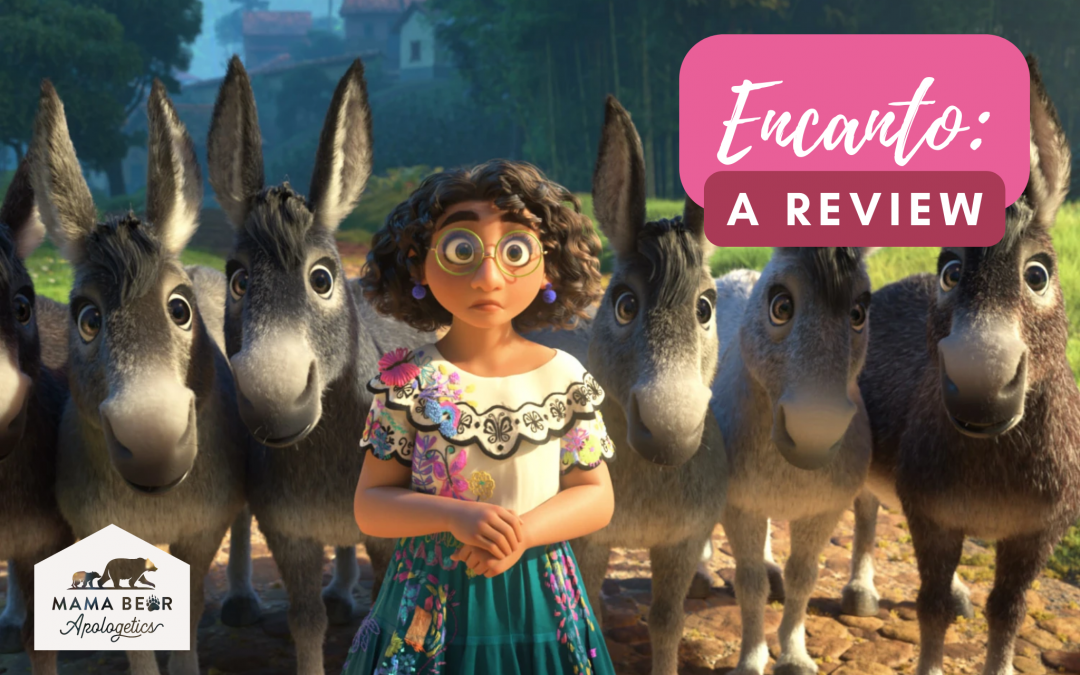 SPOILER ALERT: If you don’t want to know the plot about Encanto, we recommend you do not read this review. We give away quite a bit. As always, we encourage you to #ROARLikeAMother with films and television shows. Not everything will be appropriate for your family. Be willing to talk through the issues with your kids.  This movie contains heavy themes of magic, which we do not address a lot in the review below, but if your family avoids films with magic in it, this would not be a good film for your family.

Encanto Celebrates the Joy and Challenge of Family Life

Set in Colombia, Encanto (Disney+) tells the story of the Madrigals, a multigenerational family living in a magical house. Abuela, the matriarch, has ruled the colorful, loving brood ever since she lost both her husband and her hometown due to unspecified attackers long ago. Left with newborn triplets, Abuela experienced a miracle. When her husband disappeared, she received an enchanted candle. The light from her candle pushed up mountains between the townspeople and attackers and created a large house that is magically alive. As each child and grandchild of Abuela “comes of age” (about 5 years old), a door in the house lights up with their name, and they receive a superpower, referred to as their “gift.” Abuela teaches her family that their gifts are to be used in service to others, to strengthen the family and the town.

Enter Mirabel, the only grandchild who did not receive a supernatural gift.  A teenage Mirabel and her whole family must now face growing cracks in both their magical house and their family relationships. Her quest to “save the miracle” uncovers the unspoken strains and secrets that lie just beneath the family’s surface, which frightens and angers Abuela. A confrontation between Abuela and Mirabel brings about the very thing both fear the most — the collapse of the house and destruction of the magic. When all seems lost, the family pulls together and experiences healing and reconciliation. With the help of the townspeople, the family Madrigal rebuilds — and welcomes the magic back to a house and a family resting on a stronger foundation.

The Dangers of Legalism

The opening song introduces the three generations of the Madrigal family. Abuela’s two grown daughters are happily married with kids of their own. The mysterious third triplet, Bruno—whose gift was seeing visions of the future — had disappeared years before (a key plot point).

I was pleasantly surprised to see the dangers of legalism addressed in this movie. As a longtime Lutheran, I’ve learned a “Law and Gospel” approach to discerning biblical and theological themes, and Abuela expresses an all-Law approach when she sings, “We swear to always help those around us and earn the miracle that somehow found us.” Abuela thinks a miracle must be earned and that each member of the family must work to keep the miracle alive. This small line, easily forgotten in the flood of words and music, is a hint that something is not quite right in the family Madrigal.

Motivated by the fear of losing the miracle and her home, Abuela pushes her children and grandchildren into a life of striving and service, so that they all may be worthy of the miracle they’ve been given. In other words, she’s preaching a works-based worldview, not a Christian, grace-based view. To the film’s credit, it shows the damage of this flawed worldview, as well as how easily we can fall into such legalism.

Mama Bears, it can be tough to accept God’s grace. Even though Christians believe that our sins are forgiven because of the death and resurrection of Jesus, we often turn back to legalism in our efforts to “be a good Christian.” We receive a miracle and then think we need to earn it all over again. We can fall into the trap of thinking and inadvertently teaching that the virtues of hard work and service to others are ways to gain God’s favor rather than responses to God’s love and good work within us. But we’ve been set free: “For freedom Christ has set us free; stand firm therefore, and do not submit again to a yoke of slavery,” writes Paul in Galatians 5:1 (ESV).

Unlike most Disney movies — and, indeed, most children’s movies — Encanto’s heroine journeys toward rather than away from her family. The film shows a richer view of human relationships than the classic Disney hero/heroine and villain stories — and a beautiful picture of true repentance and reconciliation. In order for true repentance and reconciliation to happen, both the offended and the offending party must be honest. Up until the end of the movie, Abuela operates under the assumption that imperfections must be swept under the rug. By the end, however, Abuela recognizes the damage that her strict, fear-based legalistic approach has done to Mirabel and the rest of the family. In turn, Mirabel gains a truer understanding of the real love and concern underlying Abuela’s actions, extends sympathy and compassion for her grandmother’s past pain, and forgives her. In the ruins of their former house, the family stops pretending and starts relating to each other more truthfully. Abuela apologizes to the entire family, and Bruno, the exiled son, is welcomed back into the family.

The importance of truth and the acceptance of imperfection are Encanto’s most prominent themes. Mirabel’s quest for the truth frees the family from their legalistic mindset. No longer isolated from the townspeople and each other by continually trying to prove themselves worthy, the family builds a new house with a new foundation — truth, forgiveness, and acceptance. They can now see each other and themselves as whole people, valued for more than their gifts.

Although God is not mentioned, affirming each person as having intrinsic worth apart from their strengths reflects the doctrine of the imago Dei — the biblical assertion that every human is made in the image of God. Also worth mentioning is the many ways the imago Dei is shown through the beautiful animation of a wide range of characters, with many different skin tones, hair, body types, and ages.

Even though Encanto resonates with a Christian worldview better than many of Disney’s animated movies, the term miracle is used throughout without any acknowledgment of where (or from Whom) a miracle usually comes from. In Mirabel’s song “Waiting for a Miracle,” she looks upward as she sings “Bless me now as you blessed us all those years ago, when you gave us a miracle.” The word miracle suggests that the “magic” has been bestowed on the family from something outside of themselves. The superpowers are not innate, but a gift. Perhaps calling magic a miracle is the closest a mass-market secular movie can get to acknowledging God. But as the camera pans toward the object of Mirabel’s gaze, we see the miraculous candle. She’s asking a candle to bless her? (*cough* Deuteronomy 4:28) I would have liked to see Mirabel looking toward the sky (a visual often used to suggest prayer) rather than at the candle.

I found Encanto to be deeply insightful about the joys and complexities of family relationships. Its music and visual artistry are top-notch, and you and your kids are likely to find yourselves humming one or more of the catchy songs. There is even a nod to Christianity when the strong sister is asked to move a church building, and a priest with a clerical collar shows up several times. Strangely, the priest first appears in the impressive earworm of a song “We Don’t Talk About Bruno,” which laments the difficulty of having a prophet in town. But he also arrives in the front line of the townspeople coming to rebuild the house. It was refreshing to see a priest depicted as an ordinary part of a community, and his presence at the front of the crowd suggests that he is a community leader.

Mirabel’s journey “to save the miracle” is engaging all by itself, which is how I expect younger children will enjoy it. But for teens and adults, it can be experienced at a whole different level, with an awareness of how past unresolved pain can influence family relationships for generations. For Christians, the themes of truth, grace, repentance, and forgiveness shine brightly.

Discussion Questions for your Kids