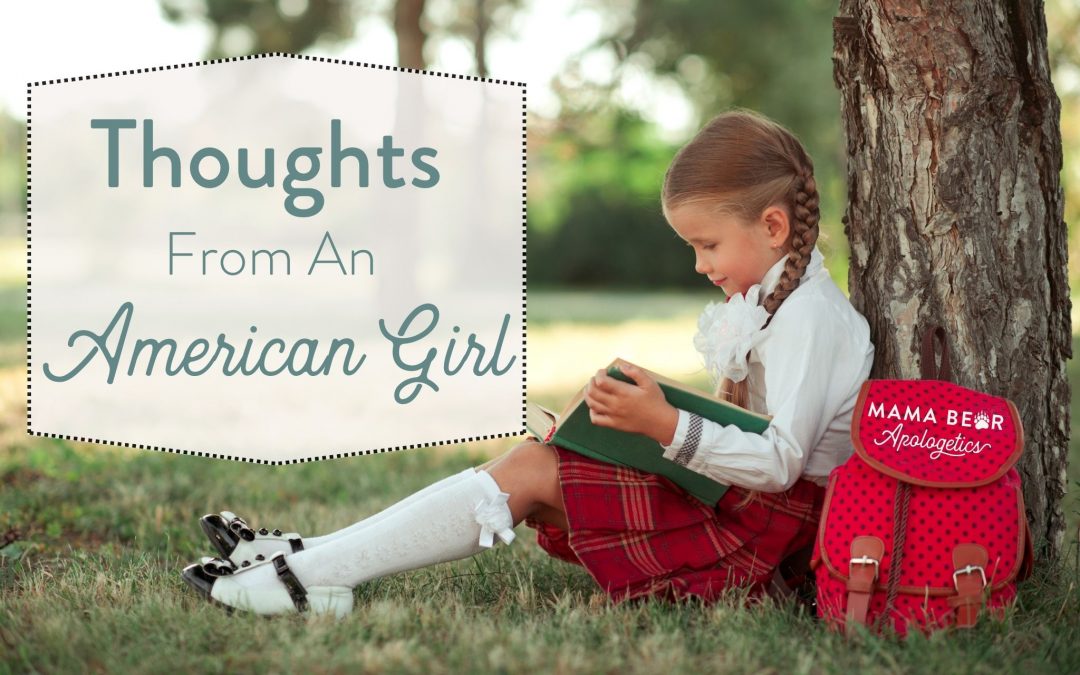 I’ll never forget the Christmas I turned 9. That spring, an American Girl® catalog made its way into our mailbox. When I spied Molly with her glasses and brown fringe bangs, a staple of my 90’s girlhood, I knew I had to have her. So, my mom and I made a pact. If I read every book in the American Girl: Molly series (I was a struggling reader at the time), I would get the doll.

I devoured every single page a dozen times over that year. The “Look back in History” section at the end of each book sparked a fascination about World War 2 that even my own children share. No six books marked my childhood more deeply than the adventures of Molly and, as promised, that Christmas I found her waiting for me under the tree.

As I grew, so did my collection of accessories and books. The official American Girl guides taught me everything from how to handle bullies and babysitting to understanding my developing body. I looked forward to the day when I could make that same pact with my daughter. But God made me a boy mom, so the adventures of Molly, Felicity, and other original American Girls remain a cherished memory on my shelf while Diary of a Wimpy Kid reigns supreme at my home now.

But it isn’t those books that are caught in the cultural crosshairs. American Girl’s newest book, A Smart Girl’s Guide to Body Image, follows in the footsteps of its predecessors by giving girls practical tips on how to deal with everything from diets to clothes to body boundaries.

Only now there’s more on a girl’s plate than bullies and pimples. Our daughters are now faced with a new battlefield: the question of their identity.

Throughout Body Image, ideas that once moonlighted in the lecture halls of a women’s studies program are now pumped straight into the hands of first graders. Girls ages 7 to 11 are taught that gender expression is how they dress to match a masculine, feminine, or in-between stereotype. Their gender identity (their internal perception of themselves) might differ from their biological sex that had been “assigned” (via chromosomes and affirmed by a doctor) at birth. Nothing says 'American Girl' these days more than teaching girls as young as 7 how to ask for puberty blockers. #AmericanGirl Click To Tweet

Girls who are sure they’re transgender (though they don’t explain how a girl comes to know this) are then encouraged to speak to a parent, a trusted adult, or a school counselor who can connect them to a doctor to help them decide what’s best for their bodies. The book says that it might start with changing clothes to match what feels most “true to you.” Then, if they haven’t started puberty, they can start “medicine” to delay development. Even if puberty has begun, “…doctors can still help.” So can the organizations listed at the back of the book.

What most girls won’t notice is the careful balance of doublespeak. On page 68 they’re encouraged to love their bodies which, “isn’t [like] a dress you can trade in for a trendier version, it’s the only one you’ve got!” Only after telling our daughters that it’s ok to want to change them (p. 38). Sure, Body Image denounces diets as “toxic” and ineffective (stop fat-shaming you bigot!), but hormone blockers and irreversible surgeries with life-long side effects? Nah, that’s embraced as part of the process of accepting your true self! In one section they tell girls how to accept their bodies and just a few pages later, they instruct them on how to permanently alter their bodies if they are not happy. Doublespeak much? #AmericanGirl Click To Tweet

But what is true? What, then, is a girl? The book doesn’t say. That’s the problem. When womanhood is reduced to a cultural stereotype, it’s obliterated altogether. Being a girl becomes a caricature, a fantasy. One that comes with clothes and accessories, just like the doll under my Christmas tree all those years ago. But side effects are too numerous to be swept under the gender-affirming rug: infertility, painful sex, later inability to orgasm, cancer, depression, altered vocal range, and more. (That baritone voice does not go away, ladies.) And remember, these are “medicines” that are being given to a healthy body. Healthy bodies should not need medicines.

Parents are rightfully outraged, but we can’t let our frustration distract us from the fact that there are people who genuinely believe that gender theory is true. Not because of politics, but because affirming-only doctors and psychologists assure them that it’s the only option. For many, the arguments sound right.

While reading the outraged comments following the 1-star reviews for the guide, I was struck with a sobering aspect of being a faithful witness. We have to be careful that we don’t allow our haste to stop the chaos to blind us to the captives lost in its midst.

There are a few things we Christians need to remember:

1. We can’t expect the world to reflect the Word

I get it. Back in our day, the biggest girl issues were teen pregnancy and bulimia (which are definitely big issues), but this isn’t 1995. The only reason the world seems more wholesome in the rearview mirror is because of a combination of childhood ignorance and the fact that the majority of kids’ entertainment reflected Judeo-Christian values of the body and family. Boy, has that changed! And most parents didn’t see it coming.

The world acting worldly, however, was no mystery to the early church. In John 15:18-19. we’re warned that followers of God are aliens in this world.

Just like we need a map to navigate a new city, our families need the shrewdness of a serpent so as not to fall victim to false and worldly teachings found in the media–all of which are conversations the world is already having with your children.

If something is of the world, we should expect it to conform to the world’s pattern, which American Girl has done. In reality, this latest book shouldn’t have shocked us. If anything, we should have wondered what took them so long.

Art reflects culture, but it also shapes it. Why, then, do we feel like we are bound to the world? Just as the church needs an apologetic revival, so, too, do we need a revival of Christian art.

I once had a friend explain that a calling is found when we see a need and are able to meet that need. Our culture desperately needs Godly influence. There are countless people able to fill that need. It’s time for the church to start fulfilling that calling.

When Jesus dealt with unbelievers, He exercised great patience, but He never compromised truth. It’s only with believers who manipulated the church for their own gain that He flipped tables and used a whip. But in reading many of the comments in the reviews of the newest American Girl book, some of us have gotten this backward.

We can’t expect secular culture to submit to a standard they never agreed to. We can show them how their standard doesn’t accomplish the love and protection of a girl’s body that they claim to promote. We can graciously point out the faulty logic of using gender stereotypes to ground gender theory. We can show how the suicide rate within transgenderism is often misrepresented and based on false metrics.1There are often comorbidities within mental health that aren’t considered while attributing all suicidal thoughts, self-harm, suicide attempts, and completed suicides are assumed to be the same thing. See Appendix in Preston Sprinkle’s Embodied, 227-41. And that hormone blockers nearly always lead to artificial hormones. Whereas if children are allowed to progress through puberty normally most will naturally accept their biological sex.

True, this doesn’t have the immediate cathartic effects of beating someone over the head with online holy outrage. It requires patience, the willingness to listen, and to recognize hurts and needs while seeking to love according to 1 Corinthians 13. This also raises an important question: will we continue to ring like a clanging gong when the world acts worldly? Or will we use this opportunity to spark conversations that have been needing to happen for a while now? Will that talk reflect the truth and grace of Christ? Or will it reflect the same anger on which the world is currently fueled?

Perhaps this isn’t the answer you were expecting, but that wasn’t my goal. My goal was to put to use some of the skills I learned from a story about a girl who had to be brave during war. A girl who learned to sacrifice for others and stand up for what is right even when it seems like the world was falling down around her. To stand for truth in a time of uncertainty.

These are the thoughts of an American Girl.