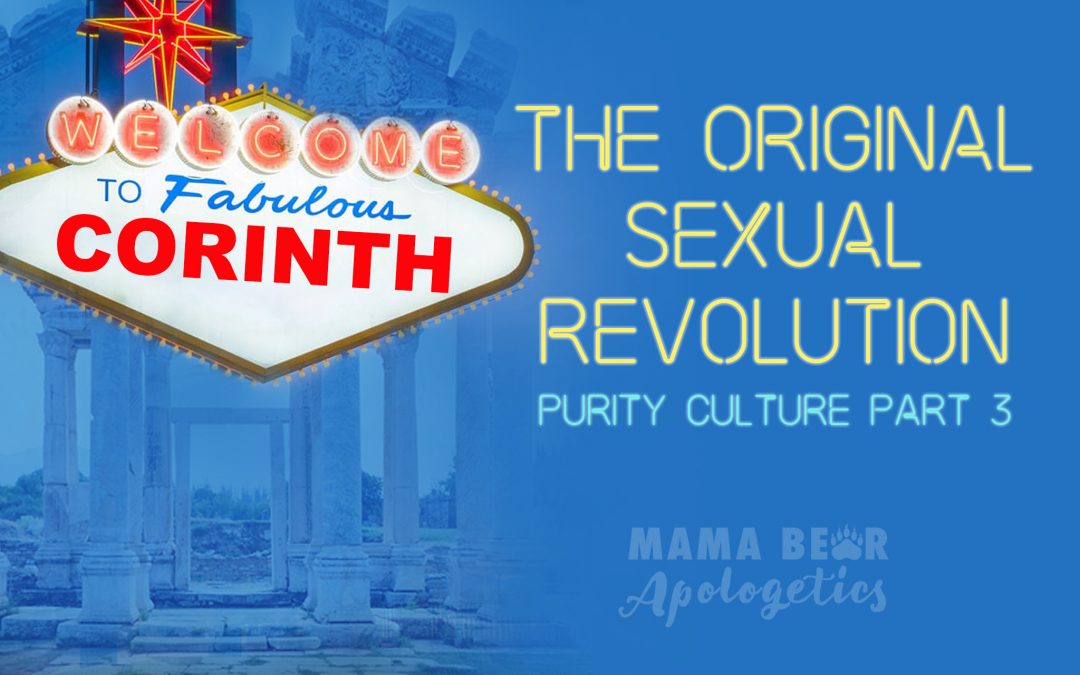 Wild Times in the Church of Corinth

Surprised? Often times when we think of the sexual revolution, images of Woodstock, daisies, and women chucking their bras into bonfires comes to mind. The revolution I want to focus on, however, came way before our underwear arsonists took over the Atlantic City boardwalk, but it was no less progressive. Bra burning aside, the ideas for the sexual revolution started much, much earlier. Click To Tweet

Corinth was like the Las Vegas of the early church days. One of the city’s main attractions was the Temple of Aphrodite, the goddess of love and (you guessed it) sexuality.

If you wanted to worship at Aphrodite’s temple, you didn’t show up with a box of chocolates and some flowers you picked up at Kroger. Nope, you’d hire yourself a temple priest or priestess and…. well, let’s just say this place made the Playboy Mansion look like a Ned Flanders Bible study.

This highly sexualized form of worship created some problems within the early Corinthian church. Paul had previously written them in 1 Corinthians 5:9 to explain what sexual immorality was, and to encourage them to stay away. However, many in the Corinthian church chose to focus instead on Paul’s proclamations of freedom in Christ to mean, “We have the right to do anything,” (1 Corinthians 6:12), and as a result, sexual immorality crept into the church faster than ants at a picnic.

At the beginning of chapter 5, Paul does a massive face-palm and asks them “Why are you boasting about your sexual immorality? It’s even worse than the pagans I warned you about!”  The Corinthians, of course, tried to justify their progressive sexual ethic by comparing it to the body’s natural desire for food. You eat food because your body was designed to eat, right? So, why would I deprive the ladies of this gorgeous bod whenever the feeling arises? *Cue manly flexing*

Paul, of course, didn’t buy this for a second. He agreed that the stomach was designed to consume food,[1] but the body was not created for us to bring all the boys in the yard, if you catch my drift.

In fact, there were two major myths that the Corinthians believed and, wouldn’t you know it, these same myths have pervaded the sexual revolution all the way up through today.

Lie #1: Sex is nothing more than an instinct.

When I was a teen the Bloodhound Gang had a popular song with a chorus that chanted,

You and me, baby, ain’t nothin’ but mammals

so let’s do it like they do on the discovery channel.

While I can’t say for certain if the artists were Darwinists, their lyrics certainly were Darwinian and so is the idea that sex is just the natural outworking of carnal instinct. Some go so far as to even call it a basic need (as if anyone has ever died from lack of sex.) This idea isn’t going away. In September of 2018, Teen Vogue argued for sexual pleasure as a basic human right.[2] Is sex just an instinct, a need, or a right? Or is there another theory that we should consider? #sexuality #lovethybody Click To Tweet

These beliefs of sex as necessary for survival were hugely popular with sexual revolutionists like Sigmund Freud and Margaret Sanger, who wanted to free our sexuality from the confines of marriage and the “oppression of religion.”[3] To do this, they needed to ground sexuality in something other than the pesky Christian moral order, and a naturalistic worldview afforded them all the license they wanted. Since we’re all “just animals,” there’s no reason to restrain our carnal desires because they didn’t have any moral weight to begin with.[4] Because, you see baby, we ain’t nothin’ but mammals.

Thus, secular psychologists declared that sex was “…acceptable in whatever form it manifests,”[5] which was the same conclusion the Corinthians tried to convince Paul of.[6] They just used God’s design for the body instead of naturalism as the mode to get them there.

This would have been true if sex were just a necessary bodily function that needed to be satisfied (like eating), but sex is much more than that. As believers, our bodies (and by this, I mean our whole selves, body, soul and spirit) are united with Christ (1 Corinthians 6:16-17). This is why we’re told that our bodies are not our own to do with as we please, but are temples of the Holy Spirit, (v. 19). What we do with that temple (e.g.,  the whole person) is to be in line with the commands God makes based on His perfect nature and the design for His creation.

This is where the Corinthian stomach analogy fell flat. The stomach serves just one purpose, to digest food and send it by way of the city sewer.[7] But sex was designed to be shared between a man and a woman in marriage as a symbol of the intimate relationship God shares with the Church. When sexual immorality is allowed to enter into that temple and take the place of God (v. 15), it corrodes the body and soul from the inside out, similar to how stomach acid erodes tissue when it ventures outside of the gut.[8]

So, to say that sex is just an instinct degraded both the beauty and purpose of sex, and that degradation came with some very real consequences.

Lie #2: The effects of sexual promiscuity are no big deal.

The second error our Corinthian brothers and sisters made was to trivialize the appeal and effects of sexual immorality. We tend to do this with any sin we struggle with (not just sex) or when the ones in error are people we know and love. The issues in Corinth were tolerated so long that they confused them as a mark of spiritual growth (1 Corinthians 5:1-2). In a way, they were saying, “We’re so spiritually woke that we can do whatever we want! Hurray for God’s grace! We’re the only ones who truly understand how robust it is.” Being spiritually 'woke' should never manifest with salvation apart from the fruit of repentance. Click To Tweet

Whether it’s first-century believers or the modern-day Bachelorette, there’s no denying that this false view of sexual liberty is present in the Church. It’s gained even more traction with those who were hurt by the false teachings within the purity culture, and it has contributed to the influx of body positive messages found within many sex-ed curriculums today.

Body positivity echoes a lot of the naturalistic views of the sexual revolution. In sex-ed books for kids, it plays out in the form of encouraging and embracing whatever sexual urges they have.[9]

This body-only emphasis[14] denies (or ignores) the fact that we are not just physical beings while arguing that our focus should be on pleasure, not on discerning what is ultimately good. *cough* Moral relativism. *cough*

Get ready to Roar

This probably sounds crazy that such messages are being presented to kids but let me assure you that we can offer some helpful discernment and a few parenting goals to strive for.  Yet, if my hunch is right, those little crumb-gobblers you created have figured out you’re hiding out in the bedroom closet with the remains of the Easter candy stash by now. So let’s call it a day and in our next post we’ll get to those responses and wrap up with some great resources to help you make the most of the next conversation with your kiddos.

[1] Previously there had been some confusion about whether it was lawful to eat meat that had been sacrificed to idols. Paul dispensed with the idea that meat had any spiritual anchors to the other gods, which opened up some culinary freedom to the new believers. They mistakenly took that freedom to mean they could do anything they wanted with their bodies and engaged in sexually immoral acts.

[3] Nancy R. Pearcey, Love Thy Body (Grand Rapids: Baker Publishing, 2018), 132 They were also among the most notable supporters of the sexual revolution.

[4] Ibid. Freud viewed the biblical sexual ethic like the bad perm and braces stage of our moral development as we evolved into higher mammals. As such, they could not only brush aside the silly religious prudes, they could also use this worldview to argue that sexual temperance was a cruel form of self-harm that only the “weaklings” practiced. Freud’s words. I can’t help but smile at this a little. Self-control is for weaklings? These folks obviously missed the boat on how hard it is to say ‘no’ when the one you love gives you that come-hither stare. Only the good Lord can give you strength enough to high-tail it out of there in those moments and those that make it out should never be called weak.

[5] Ibid. This was a quote by Alfred Kinsey who conducted some seriously warped experiments (ones that would land him on the sexual offenders’ registry today) to further the advances of sexual liberation.

[7] You are called to the Lord, not to false idol of sex who neither died for you nor imparts incorruptible satisfaction  (John 4:14).

[8]This is why sex isn’t just a meaningless carnal desire. It is the only blessing that can bring forth life and nurture the bond of a husband to his wife and is the only sin we are never told to wrestle with or fight against. Instead, we are to do our best Forrest Gump impression and RUN!

[12]  Lynda Madaras and Area Madaras, My Body, My Self: For Boys. Also included in their other book, “What’s Happening to my Body?” Book for Girls.

[14] I saw this a lot in the Madaras’ book, though hers wasn’t the only one. She often said that since something doesn’t cause physical harm then it’s morally a-ok, but we aren’t just physical beings, are we? What about the emotional and spiritual harm that can ensue when we follow our bodily desires? She advised kids to ask their parents but repeatedly emphasized that she didn’t have any problem with it.