The Importance of Christmas Traditions 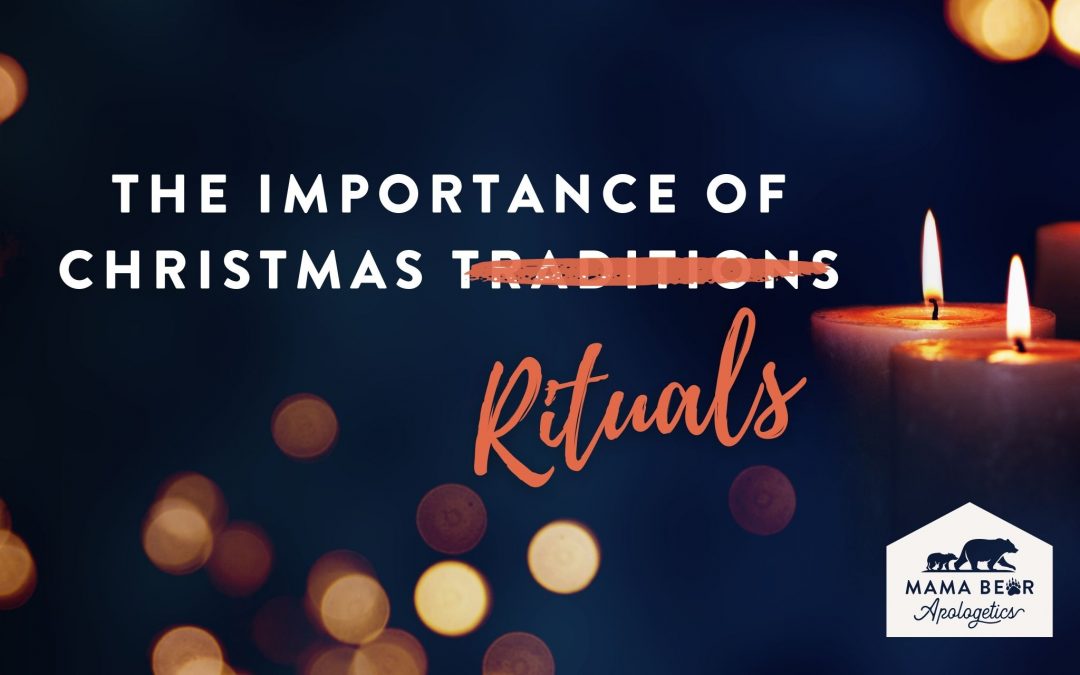 What do you think of when you hear the word tradition? Your great aunt’s famous casserole? Opening a single gift on Christmas Eve? Watching that creepy claymation Rudolph film? (You know… the one with the elf who wants to be a dentist?) Most of our families have some sort of tradition — some that are unique to us and some that are not.

Now I want you to think of a second word: ritual.

Ooooh… the warm fuzzies aren’t quite as warm, are they?

The importance of ritual can be summed up in one little word: forgetful.

We are a forgetful people.

I was at a training a few years ago and they asked us to write down one area of life that we had difficulty “giving over to God.” After writing my answer, they then followed up with the question, “What are three ways that the Lord has been faithful to you in that area?”

I wrote out six ways (and probably could have listed more).

An effective ritual isn’t just a one-time thing. It’s a form of repetition, and repetition is the means to remembrance. As we discuss in our recent book, the human mind has difficulty distinguishing between familiarity and truth — meaning the more that we hear something, the more likely we are to believe it. Spoken ritual embeds words of truth in our minds so continuously that the truths become second nature. We are not bypassing rational thought nor are we trying to convince ourselves of something we merely want to be true.

Through spoken rituals, reinforce truths, giving them roots in our minds so that the truth will live and bloom there continuously. Sometimes this head knowledge penetrates the heart as well. But when it doesn’t, ritual can support truth in another way.

We can know something to be true in statement form, but there is additional power in acting out what we know to be true. In performing rituals, participants act out that which they are trying to remember. An example of this would be the Passover meal. Not only is what is eaten symbolic, but the manner in which it is eaten carries meaning. Not once, not twice, but three times God tells the Israelites to celebrate it as a “lasting ordinance.” (Exodus 12) When their children ask why they perform this ritual, the parents are to know the story and retell it for future generations. Through the words that are spoken, the food that is eaten, and the haste in which it is eaten, Jewish people are continually reminded of how the Lord freed them from the Egyptians.

3. It’s a way to maintain our identity as Christians

Every culture has rituals. The Maori tattoo their histories onto their bodies, tribal dances across the world reinforce values and history, and most countries have a national anthem that tells their unique story. All of these are a form of historical preservation and history is a primary way that cultures maintain their identity. Memories are a large part of what makes us who we are and history is essentially a culture’s collective memory. We understand who we are by understanding where we’ve been.

As Rod Dreher explains in his book Live Not By Lies, “Christians today find it difficult to pass on the faith to the young in large part because all of us have become habituated to a way of life in which there are few if any shared beliefs and customs…”1Rod Dreher, Live Not by Lies: A Manual for Christian Dissidents (New York: Penguin, 2020), 116.

Part of having an identity in Christ is having shared beliefs and memories. These are upheld through customs, traditions, and (gasp) even rituals.

Look for ways to create memories that don’t just revolve around fun, but around reinforcing the meaning of Christmas. Don’t just read the story of Jesus’ birth — discuss it. Print out lyrics to the older, theologically rich Christmas carols and discuss them as a family.

Christmas itself is a ritual — a shared identity we have as Christians to remember that the God of this universe came in the flesh. He descended from the heavens and humbled Himself to be born of a woman, and not even in a respectable manner. Establish this as a lasting ordinance for your children so that when they ask why you do certain things during Christmas, you have an answer that points them towards the greatest gift we ever received — Christ in the flesh, coming to live, die, and rise again so that we might live with Him for eternity.