Sexual Discipleship Is Not Indoctrination…Here’s Why! 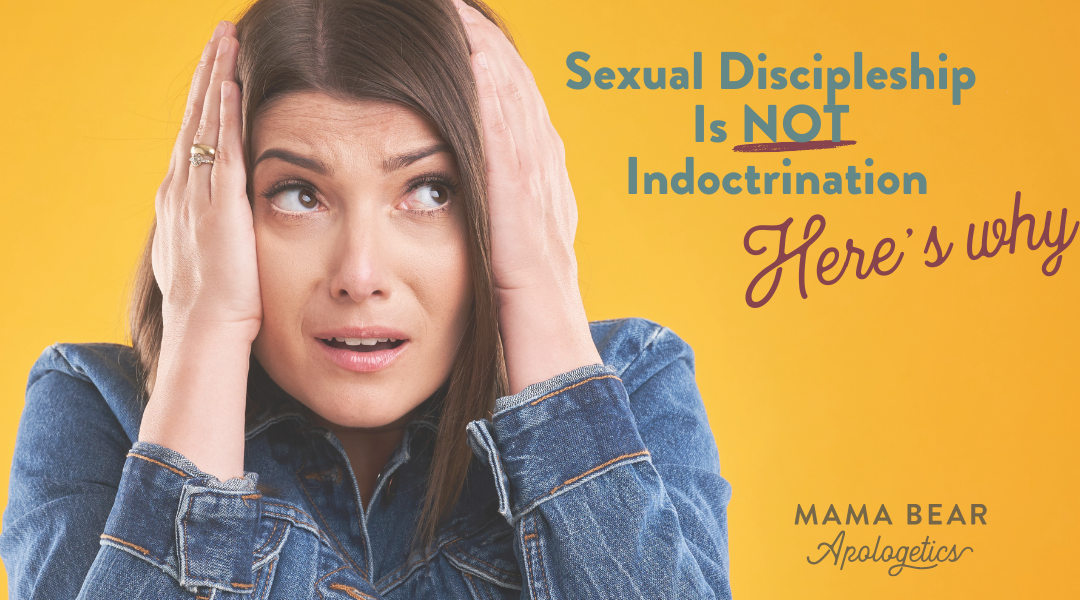 Discipleship is not a word you hear that often outside of the occasional sermon series on the Apostles. In fact, I’m willing to bet an overpriced latte that you’ve never heard your church use it to refer to how we should shepherd our children’s understanding of biblical sexuality. But parents, there is no better way! There’s just a slight problem: the word discipleship is nowhere to be found in the Bible. No really. Flip to the index and check. I’ll wait……

See what I mean?

Spoiler Alert: Teaching is not indoctrination.

If you want to stir up the hornet’s nest of social media, tweet about how you’re raising your kids to understand the Christian worldview. It won’t take long before the progressive police shriek “Indoctrination!” and accuse you of being a Christian Castro in yoga pants. They’re totally wrong of course. (Obviously, Castro could never pull off lululemon, and I doubt he ever hid in a closet to eat the last brownie while his toddlers clawed like zombies at the door.) They’re panicking because at one point, instead of being taught how to discern good ideas from bad, some parents (sadly) opted for indoctrination instead. But like all good mama bears, let’s first define our terms.

Indoctrination is when people are manipulated into accepting an idea without being allowed to think critically about the truth of the teaching. You just accept it, no questions asked.

Think of this like an assembly line of Talking Tina dolls. Each doll rolls across the assembly line with a sewn-in voice box and a few prerecorded identical phrases. Press her hand and Presto! Tina says exactly what she was programmed to say, no thinking required.

For some parents, this was the epitome of religious “teaching.” Raising kids to ask questions about Christianity was akin to putting them on the highway to hell. In the dozens of books Hillary and I have read about Christians who rejected the traditional understanding of Scripture (or who renounced their faith completely), nearly all were raised in this indoctrination-style household. There was no discipling; just an implicit understanding that if you lived in this house, you believe what we say. Period. End of story.

A bad case of “the fundies”

The second challenge often raised against discipleship is one we’re probably all familiar with: fundamentalism. Fundamentalism began as a sort of justice league of evangelicals to combat liberal challenges against the supernatural and the “…historicity and truth of Christian doctrine.” Dozens of church leaders from across denominational lines united around the fundamentals of the faith — contending for the fundamentals of the faith like Christ’s divinity, the resurrections, creation, and inerrancy of Scripture.

Things were going well until the mid-1920s. At this point, some within the fundamentalist camp wanted to kick things up a notch…or ten. Healthy fundamentalism morphed into an unhealthy hyper-fundamentalism.

If you’ve ever seen the movie The Waterboy (starring Adam Sandler), you’ll no doubt remember how his mother thought everything was of “the devil.” This hilarious bit of comedy was a modern poke at the fundamentalist’s view that things like dancing, playing cards, foosball (football,) and spicy food were going to damn your soul to hell. Protecting the church meant that the movement had to get militant, and boy did it ever! They combined a strictly literal understanding of scripture with their own standard for how people should act (aka legalism) and would gleefully boil anyone in the proverbial pot of self-righteousness if they happened to deviate from it.

If you grew up under this influence, sex was what separated the good boys and girls from the bad. It was a trap waiting to ensnare sweet and innocent Christians. As we saw within purity culture, you might have even been told your body was that trap. So you better put on another sweater or your future spouse will pass you over for someone more worthy. The problem with hyper-fundamentalism is that it used the premarital bed (or the back of your boyfriend’s Nissan) as the gateway to the cross. Sure kids may have made it down the aisle with their purity rings still shining, but for some, the sexual anxiety that followed them into marriage made faithfulness feel worse than if they had actually sinned. As a result, many came back from their honeymoons guilt-ridden. And when things continued to be difficult on the sex front, they left the church behind them for good.

It’s worth the fight.

Famous boxer Joe Lewis once said that everyone has a plan until they get hit, and the church is no different. They tried to have a plan, but between accusations of indoctrination, hyper-fundamentalism, and the, at times, graceless response to LGBTQ issues, the church has taken more than its share of hits. As Juli Slattery points out, the problem isn’t that the spiritual battle defending biblical sexuality isn’t worth having, it’s that the church doesn’t know how to fight.1 And the fallout isn’t pretty.

Pew Research conducted a survey on views regarding sexuality and found that 57% of Christians believed premarital sex in a committed relationship was fine, while 50% said that hookups (sleeping with someone you aren’t committed to) was no biggie!2 According to one study, upwards of 80% of unmarried evangelicals between 18-29 have had sex.3 And 54% of Christians think homosexuality should be accepted rather than discouraged by the church.

We, as parents, aren’t doing much better. Many of us grew up in a “don’t ask-don’t tell”4 household when it came to discussing sex, and we’ve happily carried on the tradition with our kids. For some of us, the silence is rooted in fear. We’re afraid that if we talk about sex, then our kids will want sex. What teen wouldn’t want to after hearing about how good it can feel? And boobs are involved, too?! Nope. It’s best to keep that little subject out of sight and out of mind.

Perhaps you are only now shaking off the weight of toxic sexual messages that were piled on your teenage shoulders. The last thing you want is for your children to feel the same guilt and shame you did. For others, we just don’t know what to say. Heck, we don’t even understand how the biblical sexual worldview is a critical aspect in our own walk with Jesus, let alone how to explain it to our kids.5 Instead, we rely on middle school health class, our kid’s friends, and Snap-Tok apps to do the legwork for us.

Church, can we come together for a moment and acknowledge a hard truth? This isn’t working. Not because there’s something wrong with God’s design. It’s how we’re teaching it (or not teaching it) that’s the problem. When we speak God’s word without grace, we don’t only sound like a clanging gong, we club a few people with it in the process. When we don’t address sin, we lose our saltiness and the gospel loses its power. We need both grace and truth to effectively reach the wounded. We have to talk about sexuality because too many are being led astray by false teachers.6

Mamas and Papas, we have to do our part, too. Our kids want us to talk to them about sex. No really, they do. When the Power to Decide campaign surveyed thousands of students, do you know who teens aged 12-15 overwhelmingly said had the most influence on their sexual decisions? Parents. Do you know who also won the influence race with teens aged 16-19? Parents.7 Don’t let their perpetual AirPods use or eye rolls fool you, our kids are listening. Let’s get some learning. Let’s start talking.

4This is more commonly known within the branches of the military as a policy regarding homosexuality among troops, but it applies here too.

5Slattery makes this point as well in Rethinking Sexuality, 24.

7 54% of teens ages 12-15 said their parents held the most sway. This shrunk to 32% during the 16-19 years with their friends gaining ground at 28%. It wasn’t until college that kids started choosing their friends over us for advice. Still, we’re ahead! Best take advantage of that lead folks! https://powertodecide.org/what-we-do/information/resource-library/parent-power-october-2016-survey-says