If your “rules for righteousness” would have condemned Jesus as a sinner… you might want to rethink your rules. 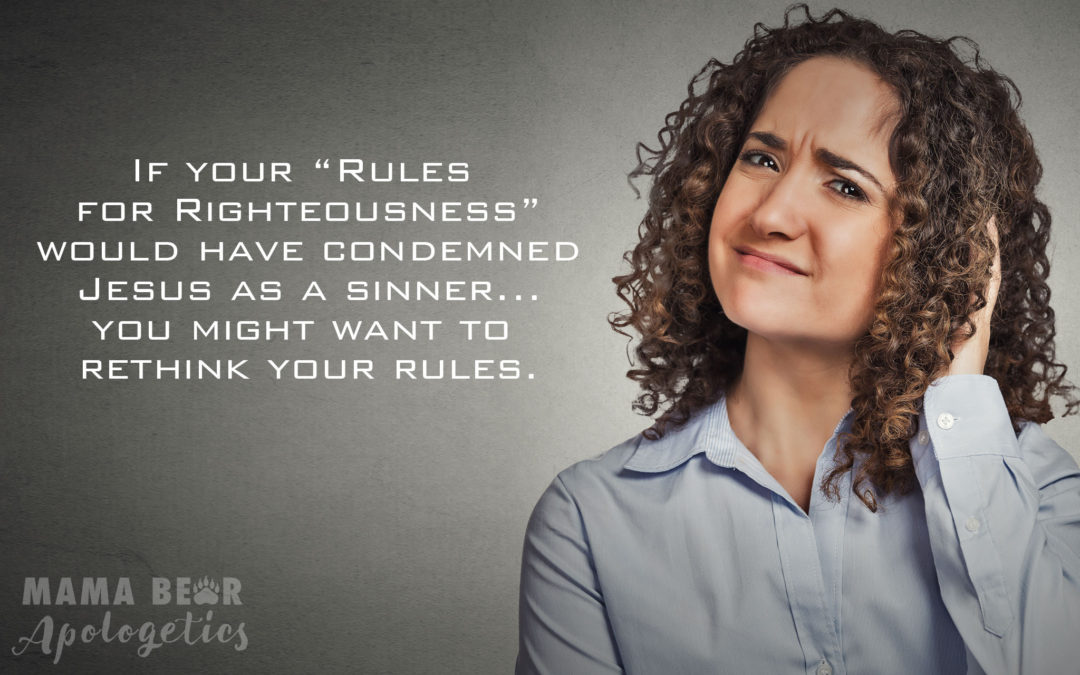 I had an interesting interaction with a sweet, well-meaning woman on Twitter today in response to the Dallas Observer ‘s article on “The Bible and Beer Consortium.” It should come as no surprise that she was questioning Christian freedom to imbibe alcohol, sending me whole pages of scripture where the Bible condemns worldly living and being drunk. It is difficult to address such a loaded topic with appropriate tact and gentleness in 144 characters, but I simply pointed out that Jesus too was accused of being a drunkard for 'eating and drinking with sinners.' Click To Tweet

I have no doubt that this woman has a genuine heart to serve the Lord and a genuine concern for the witness of those in the body of Christ, for righteous living, and for truth. Our bond in Christ is much stronger than any disagreement we could ever have about debatable issues. But a common theme I’ve observed among my many years as a Christian is the tendency to mistake personal conviction for Biblical mandates.

As parents of biological, adopted, foster, or spiritual children, our role is not to turn our children into images of ourselves. Though we may have authority for a brief window in this temporary life, our children do not belong to us. Our job is to cultivate them into the image of Christ to accomplish the purposes He has for them. Some of those purposes might be accomplished in ways that are scary to us.

Imagine how Mary felt when her son – the one who was supposed to be the celebrated savior of the Jewish nation – chose not to conquer and lead as a victor, but rather as a servant (and a homeless servant cavorting with prostitutes and lepers, no less?!?!)? But Mary chose to raise Jesus with an open hand, allowing God to accomplish His purposes, His way. While obviously none of us are raising Jesus, we must ask ourselves: are we raising children in such a way that if were they called to minister to prostitutes (or atheists in bars,) they would feel no moral conflict or judgment from us? Or are we passing along to them the personal convictions that the Lord gave to us for our particular ministries as if they were moral absolutes? In case this seems like a nebulous proposition, here is some food for thought:Are we raising our kids to fulfill God's calling on their lives, no matter what that looks like? Click To Tweet

One of the reasons I think that scripture emphasizes Christian freedom is because no two ministries will ever be identical. The convictions of those who are called to minister to believers inside the church will often differ from those called to minister to unbelievers outside the church. For some, living in L.A. would prove too tempting. For others it is their mission field. I’ve noticed that some of the best teachers regarding cults and the new age movement are also the most conservative when it comes to what kind of imaginative literature they will endorse. What might be a stumbling block to one person can be the stone that props open the door to Christ for another. Some demographics would never allow a person in authority to drink, while other demographics won’t talk with a believer unless it’s over a frosty pint. God works in both ways. As Abraham Kuyper said: “There is not a square inch in the whole domain of our human existence over which Christ, who is Sovereign over all, does not cry, Mine!” We have to teach our kids to identify which principles are absolute rules and which – as Ecclesiastes alludes to – have a time and a place. If we don’t, we could be getting in the way of how God wants to use our kids in the future.Sometimes, our convictions are what make us perfect ministers to certain demographics. Click To Tweet

2) The Christian walk does not have an autopilot

In some ways, I feel like the endless list of Christian rules are our way of creating a system whereby we can go on autopilot. We create clear lines of safe and unsafe, right and wrong, so that we don’t have to actually exercise godly wisdom in the moment. The Pharisees did the same thing. Did you know that it was unlawful to spit on the Sabbath because spit and dirt made mud, and that was “pottery making?” Apparently at some point this was an issue that had to be cleared up. It’s like those weird safety rules you see on curling irons like “Do not use while sleeping…” At some point, this little fact had to be clarified. But I digress…

Now, don’t hear what I’m not saying. The Bible has plenty of guidelines of things that are always wrong. Sex outside of Biblical marriage is always wrong. Getting trashed drunk is always wrong. However, constantly focusing on “right and wrong” is where Christianity has failed to penetrate the hearts of our children and instead been reduced to a dead list of do’s and don’ts – which brings me to my next point.There is no 'autopilot' in the Christian life. We must always exercise discernment. Click To Tweet

While there are some decisions that are blatantly right or wrong, a majority of the decisions that we make in our Christian walk come down to another set of standards: Is this decision wise, and is it loving? What is wise and loving in one situation can be unwise or unloving in another. Wisdom always takes the individual into account. What can they handle? What will be too tempting? What are their personal weaknesses? Even “What are their future goals?” Someone who aspires to one day serve in law or public office or the pastorate may have to adhere to a stricter set of rules than someone who doesn’t. Also remember, human wisdom and Godly wisdom are different. Human wisdom told Jonah that it was not a good idea to go to Ninevah. History shows us that it would have been wiser to go of his own accord. He got there either way.

The second question “What is loving?” takes the people surrounding the individual into account. When Jesus sent the disciples out 2 by 2, He made sure they knew to “eat whatever is served to you.” Translation: the people you will be ministering to will not be familiar with your dietary laws. Don’t make the gospel more difficult to swallow by making your host family self-conscious about their cuisine. Love – when exercised with Godly wisdom – will occasionally break the rules. (*And side note… the fact that people will misuse this excuse to justify unwise, unloving, or sinful decisions does not make it any less true.) Think about the blessed people who lied about having Jews in their home during the Holocaust. Jesus himself condemned the undiscerning rule followers in the parable of the good Samaritan —  key word: undiscerning. The priest was actually “following the rules” laid out for priests in Leviticus 21:11 by going to the other side of the road from what he thought was a dead body. And yet Jesus condemned him for it? Why? Scripture reminds us later in Galatians 5 that there are no laws that are against the fruits of the spirit, like love. This brings me to my next point.

One of the best ways to determine which areas are grey and which are black and white is to look at what scripture as a whole says on a topic. With regards to the drinking issue, the evangelistic non-drinkers will always cite (as the lady on Twitter did) the passage in Ephesians 5 that says, “Do not get drunk on wine which leads to debauchery.” However, they usually either ignore (or try to explain away) the passages where Jesus turns the water into wine, where He is accused of being a drunkard, or my favorite, the place where He basically tells the disciples that the first thing He’ll do when they are all reunited in the new kingdom is break open a bottle of wine to celebrate. (Matthew 26:29) A scripturally balanced view on any topic will take all of scripture into account.

The weaker brother according to scriptural standards is very different than the weaker brother according to human standards. Christian freedom is not for the faint of heart. Scripture is filled with references to the need for moderation. Not everyone is capable of moderation. There are some things that I abstain from completely because I have a difficult time moderating. We are all weaker brothers in some area of our lives, and knowing this should teach us grace towards others who struggle in areas that we don’t. In general, when people have difficulty moderating in one area (like alcohol), they assume that everyone else has equal difficulty. And to be fair, they have probably witnessed a lot of people (including themselves) who claimed total control over their addictions. When someone is offended at an area where you are able to exercise your freedom, first find out where their indignation is coming from. If it is coming from past difficulties, praise God that they are so vigilant to stay away from things that used to control them! It doesn’t mean they are right to condemn everyone else, but know that their irritation likely comes from a pure desire to honor Christ. And remember, it’s OK if they don’t understand your convictions. “Don’t cause your brother to stumble” means don’t cause someone to act against their convictions. It doesn’t simply mean “Don’t offend your brother.” Jesus offended quite a lot of people. We should never take offending someone lightly, and we should never do it on purpose. But let’s face it: many actions are catch 22’s. You’ll offend one group for doing it, and another for not. Exercise wisdom and love.What does it mean to be a 'discerning' rule follower? Click To Tweet

There is no denying that children go through developmental stages where they can distinguish between concrete and abstract thinking. When children are at the black and white stage of development, it is appropriate to express the rules of the house in black and white terms. However, our goal is for the children to grow up. For them to reach maturity in Christ, we MUST be teaching them how to make wise, Godly decisions in all aspects of their life. We must raise them in such a way that is rooted in the absolute truth of scripture while maintaining the freedom to be used however God chooses to use them. This is a difficult task, but I believe that you – my mama bears – are up to the challenge!!