Playground Apologetics Tactics Question 1: What do you mean by that? 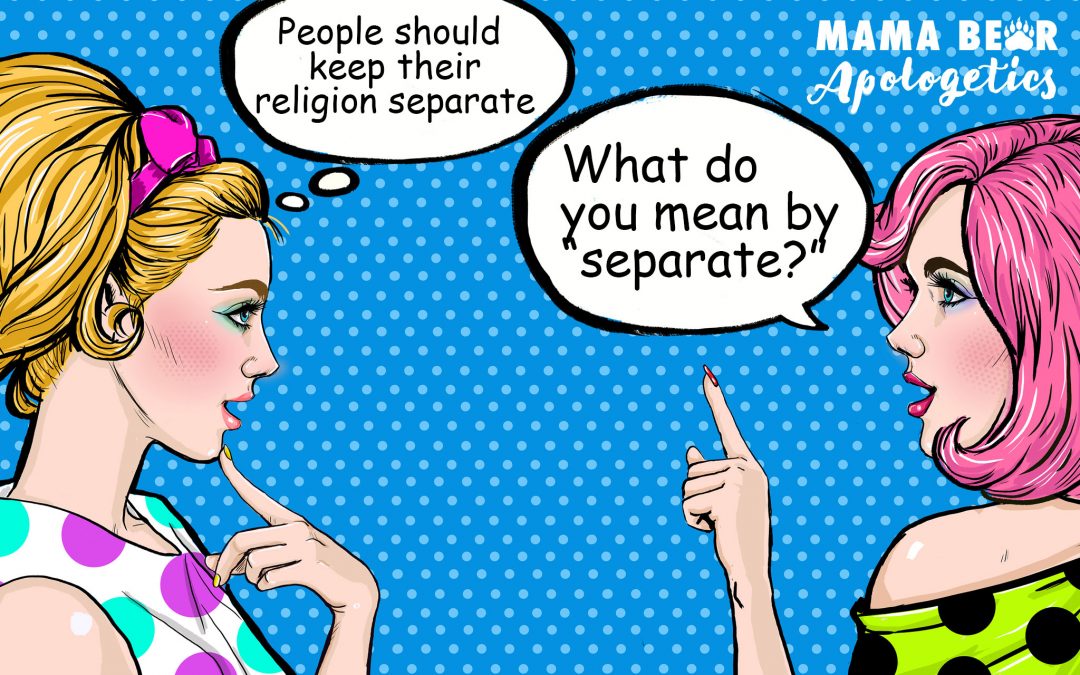 In my previous post, I discussed what Playground Apologetics was. Today, we are going to get in the nitty-gritty of how to go about having conversations with other moms, no matter where God has placed you! The main questions we are utilizing are from Greg Koukl’s book Tactics: A Game Plan for Discussing Your Christian Convictions.

In his book, Koukl outlines a number of questions and methods that you can use that will help facilitate conversations, without you coming off looking like a know-it-all. (Because honestly, who wants to talk with a know-it-all? Nobody, that’s who.)

The three questions/methods he emphasizes are:

What Do You Mean By That?

Today we’ll look at the first question, “What do you mean by that?”  This question serves to gather more facts from the scene.  For example, is your definition of “skeptic” the same as the other person’s? Defining terms is an important first step. If you don’t, you could discover only after lengthy discussion that you were talking past each other the whole time.

It’s also a great way to encourage reflection by the other party.  Some people employ terms because they’ve heard them, but haven’t really stopped to examine what they might truly mean.  Lastly, this question takes advantage of an open door by putting you in the “driver’s seat” of the conversation, as Koukl says.  It’s what can transform small talk into influential discussion.
If you don't define your terms, you could find yourselves talking past one another! Click To Tweet

I challenged myself to employ this question last weekend at the neighborhood playground.  I’ll be honest – I was hesitant at first.  I saw a mom and another dad and thought, “They seem like really nice people with whom I might want to be friends… aaaaaand I’m about to completely alienate them.”  Can you relate?

Such timidity can overcome any of us.  Yet, I threw caution to the wind and it resulted in a really fruitful conversation, and a genuine connection with my new friends!  What a sweet ending and reward for being brave and leaving my cave!  We introduced ourselves and began discussing the growth of our town, along with the diversity of culture and ideas that accompany that growth.

Me: “In fact, just the other day I got caught in the elementary school traffic going out of our neighborhood and saw a “Skeptic Kids” sticker on the car in front of me.  I thought that was a bit of a change for this community, and especially that school.  Is that accurate? Have you seen the elementary community change in that way?”

Dad:  “Yeah, it sure has.  Most of the teachers there are still Christian and so are the families, but not all of them.  Mayberry is definitely growing.”

Mom: “Well it shouldn’t really matter though, should it?  I mean, it’s a public school.  We have our son at a church pre-school, but at a public school all of that should be separate, right?”

Mom:  “It’s just about the teacher and curriculum not commenting one way or another on religion.”

Did you see what I did there? Conversations can be like being on the freeway, and certain words or phrases are like off-ramps to interesting destinations—i.e. conversations that matter. What exactly did she mean that things should be “separate?” Can I be separated from my core beliefs? Can anyone for that matter?

At this point, we had the opportunity to discuss what is being communicated when the Christian worldview is left out…at least for a brief moment before responding to our children (who were crawling through an above-ground drainage ditch).

So exactly what lent itself to fluid, non-combative conversation here?  Two things: 1) Paying attention to an open door (the growth of Mayberry), and 2) Using a question (“What do you mean by ‘separate?”).  These aren’t conceptually difficult, but they are strategic and planned.  How do you have a productive, non-combative conversation? Look for open doors, and ask questions. Click To Tweet

According to Koukl, an “open door” is only opened for about ten seconds in a conversation.  (I can’t help but wonder if it’s an even shorter opportunity when you have one eye on a child at the playground.)  The open door is the signal in the conversation for meaningful discussion.  What elements could you bring to the forefront of the conversation?  Was there mention of morality?   Suffering?  Fatigue?  Listen to the deeper message of what the person might be saying.  You’d be surprised how much lies underneath the surface talk.
Listen for the deeper message. There is a lot that lies beneath the surface of small-talk. Click To Tweet

Upon identifying the open door in the conversation, a Tactics question can walk you through it.  It can serve many functions.  It can help bring the other person to a new understanding of his or her own ideas. It can help expose areas, for example, where their beliefs may contradict one another.  It’s a fascinatingly successful technique, and yet so simple!

Doesn’t it take the pressure off to simply play the role of the interviewer?  We’ll continue to look at the remaining Tactics questions in future posts.  For now, see where you can employ a gentle and sincere “What do you mean by that?” in your playground (or grocery store line, or soccer field sideline) conversations.  We’re rooting for you, Mama Bears!

If you go out and try the Playground Apologetics techniques, tell us about it in the comments! What worked, what didn’t… We can all learn from each other, mistakes and all.