Progressive Christianity (and How to Spot It) 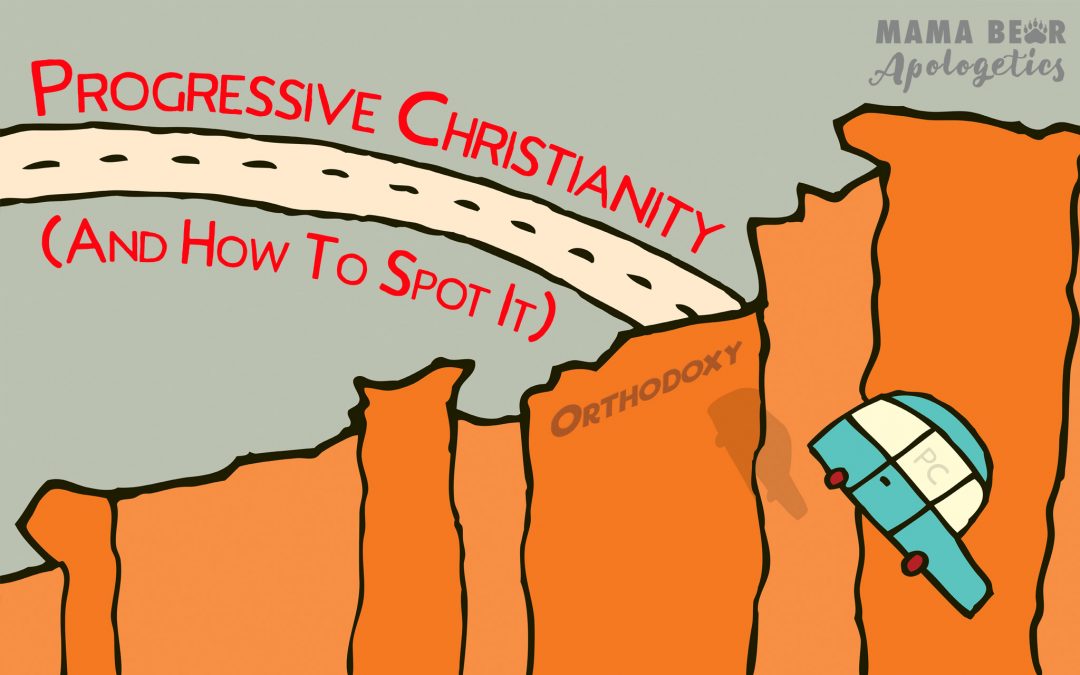 Up until about six years ago, I couldn’t have told you what a progressive church looked like. If you had asked me, I maybe would have told you that it was a liberal church, but that would have been about the extent of it. And then, in 2018, I heard former ZOEgirl member, Alisa Childers, speak at the inaugural Women in Apologetics conference. As she gave her testimony, I shifted uncomfortably in my seat because I had no idea what she was talking about. Here I was, someone pretty familiar with world religion, and I couldn’t spot progressive Christianity in a line-up. That moment when I realized that I couldn't spot Progressive Christianity in a world religions line-up... Click To Tweet

Alisa explained in her lecture that part of the reason people can’t easily spot it is because progressive Christianity is sneaky. She and her husband were attending a church, and she found out that her pastor, whom she respected, called himself a “hopeful agnostic.” Before that, she didn’t see any warning signs. Her faith was challenged in that moment, and the situation eventually led her to apologetics because she wanted to know how to defend what she believed. You can listen to her story here. You should also check out her book, Another Gospel? (Tyndale, 2020).

Many of you may know Alisa’s story, and if you do, then you’ll understand why I am going to defer to a lot of her work in this article. I want to give you some basic information about how to spot a progressive church because I want you to be prepared to identify progressive ideas in case they exist in your own church. Keep in mind, though, that not every progressive Christian will believe everything I mention below. Just as I say with every worldview, don’t make assumptions. If you want to know what a person believes, ask them.

So, just what is progressive Christianity?

Have you ever read anything by Rachel Held Evans or Rob Bell? If so, you’ve dipped your toes into the world of progressive Christianity. This doesn’t mean you are a progressive Christian, but you do need to know how to spot the inconsistencies with Scripture so you can be on guard next time you read something released as popular “Christian” non-fiction or self-help. (For a good example, check out Alisa’s article about the popular book, Girl, Wash Your Face by Rachel Hollis here.)

Way back in my first article in this series, I talked about how FBI agents spot fake money by studying real money. A person who knows the “real thing” can spot a fake instantly. (That’s why we started out this world religions series with a crash course in Christian theology! We wanted you to know the real thing before we started diving into other world religions.)

When it comes to knowing true Christianity, you need to start with your Bible. Get a reliable translation of Scripture, and study it. This is the best way to arm yourself against falsehood presented as truth.

Hillary talked about this in her blog about the “messy” church. Friends, we are sinners. That’s not us simply spilling our coffee on our shoes or having trash on the floors of our minivans. Our sin has eternal consequences (Romans 6:23), and we need to be able to confess that and realize we’ve all fallen short of the glory of God (Romans 3:23). Thankfully, by God’s grace we are saved (Ephesians 2:8-9). He didn’t just give us a new pair of shoes or a detailing service for our vans. He died so that we may live (2 Corinthians 5:15).

In progressive churches, you’ll sometimes see a move away from using the word sin or even calling sinful behaviors sinful. In a flurry of misguided compassion, the progressive Christian church has rightfully identified that the concept of sin has, in the past, been used to browbeat people by screaming hellfire and brimstone preachers. However, instead of correcting this weaponization of sin, these churches choose to instead focus on the goodness of humanity. This is not a Biblical approach to sin and does much more harm than good because, as Hillary said in her “messy” church article, if we don’t understand why we need salvation, the good news of salvation becomes a moot point.

If you ever visit a progressive Christian church or read progressive Christian literature, you’ll notice a theme: questions are more important than answers. As I’ve already said a couple of times in this article, questions are important, but answers are important, too. While they don’t come right out and say that absolute truth doesn’t exist, why should we be totally content to simply ask questions? (I mean…isn’t the purpose of questions to find answers?) Have you ever heard someone say, “Your truth is yours, my truth is mine, and either truth is okay”? How can that statement be true?  It can’t be because that would violate the law of non-contradiction (a fallacy to add to your apologetics handbook)! Simply put, the law of non-contradiction says that A cannot equal non-A. Progressives often reject putting Christianity in any sort of exclusive box or rigid dogma. One of the problems with this is that we can’t deny absolute truth because absolute truth does exist. Scripture is our compass, and once we start to sway away from what’s in the Bible, we start to accept non-truths. Don’t fall into this trap! Dear church, truth should never have a possessive pronoun in front of it. Click To Tweet

3. Jesus didn’t die for our sins. He was killed because He was a threat to the current power structures.

A couple of years ago, Hillary and Rebekah responded to an article by Unfundamentalist Parenting called “The Trouble with Easter.” (You can listen to the Mama Bear podcast about it here.) In the article, the author says she doesn’t want to teach her children that Jesus died for their sins or that Jesus died to save them from God’s judgment. She also says “Jesus died publicly and grotesquely because he was a political and religious threat to those in power.” The truth, though, is that Scripture says that Jesus died to rescue us from our sins to reconcile us with the Father (see 1 John 2:2, 1 Corinthians 15, and Hebrews 2:14).

The author of the article, who says she is a youth pastor at a progressive church, seems more concerned that topics like the atonement are too confusing or troublesome for children to learn about. Instead, she recommends that Christian parents focus on Christ’s character, emphasizing to their kids that each person is responsible for their own actions. As I’m sure you’ve already realized, the problem here is that while it is good to teach about Christ’s character, leaving out Christ’s death and resurrection defeats the purpose of the atonement entirely. Where is our hope?! Who is Christ without His death and resurrection atoning for our sins? Somebody worth admiring maybe, but not someone worth worshiping. Click To Tweet

Speaking of the atonement, some progressive Christians reject Christ’s blood atonement for our sin, and some even go so far to call it cosmic child abuse.1Steve Chalke and Alan Mann, The Lost Message of Jesus (Grand Rapids, MI: Zondervan, 2003), 182-83. Mama Bears, Christ died on the cross for you, for me, for all of humankind. Don’t let anyone fool you into thinking that God wouldn’t do this for you. He would, and He did. He also rose again on the third day. He did that, for you.

Other words progressive Christians sometimes misuse include biblical, gospel, and justice. One thing I’ve stressed in some of my other articles about religion is that you need to ask the other person what they mean when they say certain things. You’ve got to do this with progressive Christianity, too. Do not simply assume that you define words in the same way. Ask them what they mean by the words they say. (To learn more about the concept of linguistic theft, we have a whole chapter dedicated to this in the first Mama Bear Apologetics book.)

5. The Bible is just a human book.

Rob Bell once called the Bible a “profoundly human book.”2Rob Bell, What is the Bible? (San Francisco: HarperOne, 2017), 22. Many progressives will say things like “Although there’s wisdom to be found in the Bible, it was written by men. These men were writing what they believed about God, and they didn’t necessarily get everything right.” The problem with this perspective is that it gives progressives like Rob Bell the freedom to disagree with the Bible’s contents, keeping what they like and throwing the rest out with no remorse.If the Bible was merely written by fallible men, fumbling in the dark, cobbling together a book with the best information they had at the time, why trust it at all? Click To Tweet

Did you spot anything in our list that you’ve seen in your own church? I hope not, but if you have, you should talk with your pastor to see where they stand on these issues. Be sure that you attend a Bible-believing church that stays true to Scripture and doesn’t muddy the waters with bad theology.

Want to learn more about Progressive Christianity? Check out Alisa on the Mama Bear Podcast here and make sure to check out her chapter in the first Mama Bear Apologetics book, as well as visiting her website and podcast at www.AlisaChilders.com. Also, check out her book, Another Gospel? (Tyndale, 2020).