MBA 24: “Progressive” Christianity… and WHY you need to understand it 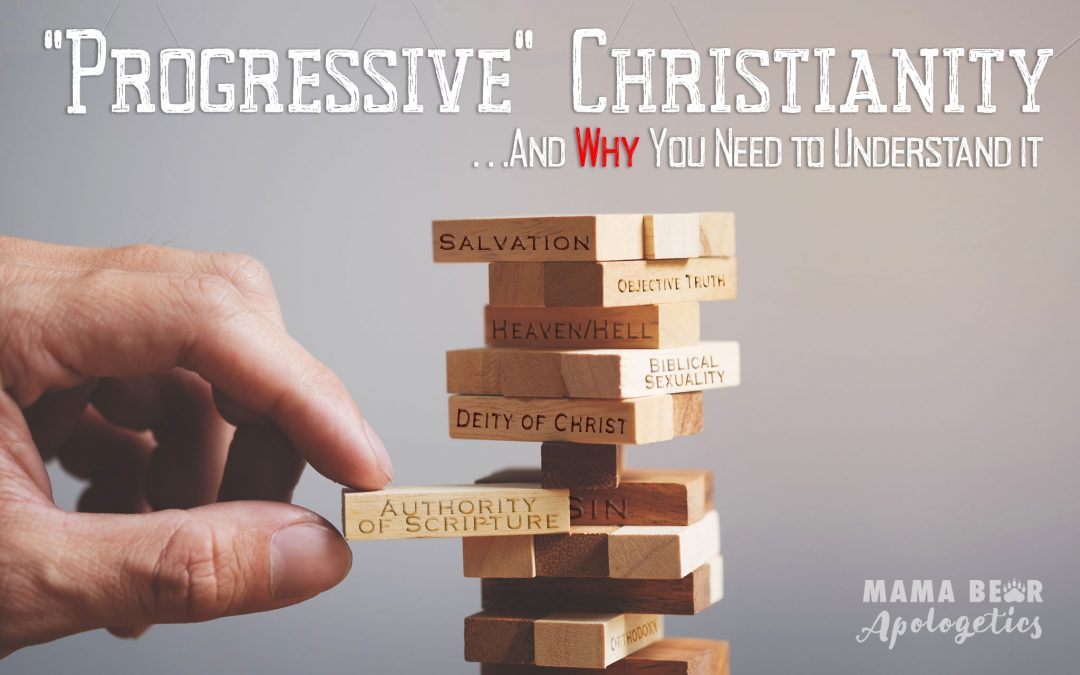 Jenga is a game about seeing how many foundational pieces of a structure can be removed and/or repositioned before it finally collapses. While this game was never intended to have philosophical undertones, I think it is an apt analogy for what we see occurring in some churches, and particularly the movement known as “progressive” Christianity.

Our goal in this podcast is not to point fingers at a whole denomination (if you can call it that…) Rather, our goal is to help parents separate historically Christian, Biblical ideas, from ideas which do not reflect the gospel as handed down to us through scripture. We want you to be aware of ideas that are being presented under the guise of Christianity. We are not called to fearfulness, but we are called to vigilance. 2 Timothy 4:3 describes a time “when people will not tolerate sound teaching. Instead, they will gather around them a great number of teachers to say what their itching ears want to hear.” (Who doesn’t want to hear that sin isn’t that big of deal, or that hell is just a metaphor?)

Our goal, in classic Mama Bear fashion, is to “chew and spit.” Swallow that which is Biblical, and reject (spit) that which is not. We affirm the hearts of many in the progressive Christian church, knowing that their desire is to love the unlovable, embrace the rejected, and to manifest the heart of Christ. However, we also recognize that out of the myriad of verses where we are called to unity, we are never called to unity with the world. (John 15:19, Romans 12:2) We are usually called to be unified in faith, in mind, and in thought – bound together by love. (1 Corinthians 1:10, 21 Peter 3:8) We are absolutely to care for orphans and widows, but in the same breath, we are to keep ourselves separate from the world – uncorrupted, and untainted. (James 1:27)

We can affirm hearts and motives without agreeing with theology that is contrary to scripture. Click To Tweet

Join us on this journey today as we discuss quotes from various progressive Christian leaders, and look at progressive literature to see how they define themselves. We will discuss Alisa’s journey through a progressive Christian church, warning signs that your church may be headed towards “progressive” Christian beliefs, misconceptions about progressive and orthodox Christianity, and finally why it is so utterly important that we understand this trend. (**Side note. I (Hillary) misspoke about P53, and there is a correction at the very end of the podcast after our outtro music.)

(In Chronological Order as Mentioned in Podcast)

**As a side note, we have a lot of resources mentioned. We do not want to appear to be endorsing all of these resources. So, for clarities sake, we will put a star (*) next to the books or articles that we endorse (i.e. the ones we believe have a generally solid theological foundation.) You can assume that we endorse all scripture references.

*The Story of Reality by Greg Koukl (pronounced Coke-ull)

Matthew Vines, an activist and leader in Progressive Christianity

A New Kind of Christianity by Brian D. McLaren

Look after orphans and widows James 1:27

Equivocation Fallacy – Using a term without distinguishing which of its multiple meanings you intend. Example: “Evolution” could mean micro (evolving molecular change) or macro (involving larger scale changes to man).

Progressive Christianity – “A shift in the authority for the Christian faith from the Bible, to personal conscience, subjective spiritual experience, or feelings.” – Alisa Childers

Self-Refuting Statement – A claim that in and of itself proves what it’s advocating to be false. Example: “I do not know a single word of English.”

Inerrancy – Without error; in Theology it is the belief that the Bible is the inspired Word of God and thus can be wholly trusted. (See the Chicago Statement of Inerrancy to understand the nuances)

Progressive Faith – Faith that grows and develops – this refers to an individual’s changing relationship to the God they have put their trust in. (i.e. different from “Progressive Theology”)

Progressive Theology – Changing core tenets of the faith according to contemporary culture. The belief that truths revealed in scripture are a starting point, and truth itself has grown, changed, and evolved over the years

Systematic Theology – An in-depth study of what the whole of scripture says about a particular topic, and harmonizing each of the individual passages to get a clearer picture of what scripture says as a whole about the issue. Asks “What does the Bible say about this topic from beginning to end?”

Blood Atonement – The requirement of a blood sacrifice to pay the penalty for sin.

Agnostic – Someone who holds the view we do not (and on some views, also cannot) know anything about the existence of God.

Objective Truth – True in all circumstances, regardless of any viewpoint. Example: 2+2 = 4, or it is wrong to torture babies for fun.

Subjective Truth – Facts that are only true based on one’s personal experience. Example: The best ice cream flavor is mint chocolate chip.

“We believe that social justice is the heart of the gospel. Progressive Christianity is about not apologizing for what we become as we live this life and openly engage the faith we grew up with. There are no sacred cows, only the relentless, sacred search for truth. Tradition, dogma, and doctrine are all fair game, because all pass through the hands of flawed humanity, and as such are all equally vulnerable to the prejudices, fears and biases of those they touch.”
– John Pavlovitz, Explaining Progressive Christianity (Otherwise Known as Christianity)

“Sometimes people have the tendency to elevate the search over the destination.”
– Hillary Morgan Ferrer

“I’m recommending we read the Bible as an inspired library. This inspired library preserves, presents, and inspires an ongoing and rigorous conversation with and about God, a living and vital civil argument into which we are all invited and through which God is revealed. … Scripture faithfully reveals the evolution of our ancestors’ best attempts to communicate their successive best understandings of God. As human capacity grows to conceive of a higher and wiser view of God, each new vision is faithfully preserved in Scripture like fossils in layers of sediment.”
– Brian McLaren, A New Kind of Christianity (p. 83 … p. 103)

“Our faith is a dynamic experience that shifts and evolves for us, and especially for a child growing leaps and bounds in their development. We cannot capture that experience and box it into a set of propositions to memorize and defend. That limits and denies the realities of the human experience.”
– Cindy Brandt, Why Your Children do NOT Need Apologetics

“The heart of the gospel, the story of reality, is creation, fall, redemption, and restoration – and out of that is going to flow social justice.”
– Alisa Childers

“Stories don’t have to be factual to speak truth.”
-Anna Skates on the topic of Christ’s resurrection, The Trouble With Easter (Side note: when it comes to the Christian faith, if it is not factual, then it is not true. Period.)

“Progressive Christianity is an assault on the foundational framework of Christianity and disarms it of its saving power.”
-Alisa Childers