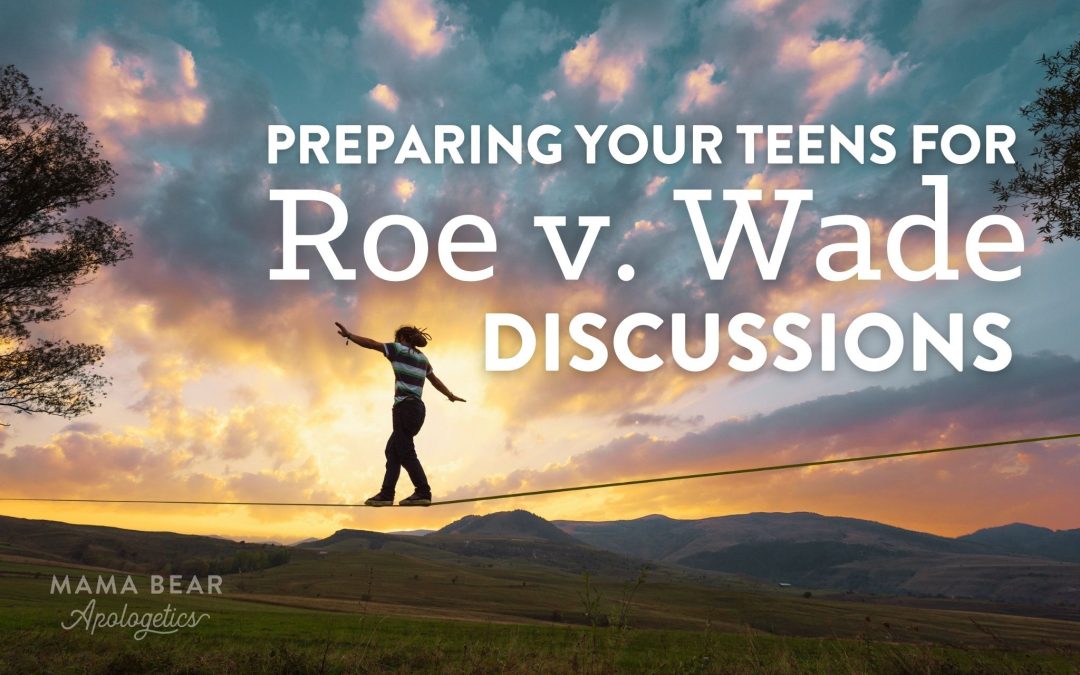 My son paused his channel surfing and turned up the volume. We watched in silence as a crowd of screaming women threw themselves against the doors of an Arizona courthouse. We had discussed the fallout of overturning Roe v. Wade since Justice Alito’s argument was leaked to the press two months ago. So he wasn’t caught off guard when clips of tear gas hurdling into the crowds flickered across the screen.

Still, he’s 14. And reality has a funny way of catching even the most prepared of us off guard.

“Do you know why they’re protesting?”

He nodded. “They’re protesting the right to abort their babies.”

He was right, but the somber reality is that his answer only touched on what’s really unfolding across the world. What played on our TV wasn’t a protest for autonomy, choice, or better job opportunities. It was a gnostic act of worship.

We like to think that we’ve come a long way from our ancestors. We don’t need the planets or stone idols to understand the world, we have the nightly news and TikTok. We don’t need to spend hours in a dusty market haggling with traders. We sip iced coffee and prime ship the world to our doorstep in only 2 days.

We’re enlightened. We’re caffeinated. Yet in spite of our civilities, our culture is still offering their children on the iron altar of Moloch. It’s just been reconstructed into the neighborhood clinics and Planned Parenthood.

This act of worship has been protected by the United States congress for nearly 50 years. It was labeled a right, and every state, regardless of the views of its people, had to pay tribute. Until now.

Now, states can elect to govern themselves by a worldview that doesn’t, according to the Guttmacher Institute, result in the annual death of almost a million unborn children. The majority of which are minorities.

As much as our family rejoiced that human dignity at every stage of life was congressionally recognized, we were careful to keep it in perspective.

As any doctor will tell you, you cannot cure an illness just by medicating symptoms. You have to address the cause. We can’t afford to think that we’ve stopped abortion simply by overturning Roe. That’s like taking aspirin and expecting it to cure cancer. Abortion, as awful as it is, isn’t the cause but the symptom of a broken worldview.

This means that we have to engage culture head-on while discipling our children if we want to raise up a generation who can spot the lies masquerading as “reproductive health.” Because culture is taking captives, and some of their loudest activists, like Olivia Rodrigo, are dominating the top spots of your child’s Amazon playlist. As any doctor will tell you, you cannot cure an illness just by medicating symptoms. You have to address the cause. #Abortion, as awful as it is, isn’t the cause but the symptom of a broken worldview. Click To Tweet

Over the next week, Hillary and I will be writing a master list of abortion lies and how to engage each one using science, statistics, psychology, and theology. We do this for two reasons:

First, to effectively understand the issue of abortion one first needs to understand God’s design for humanity. This is a vital aspect of discipleship to our children and a necessary part of our faith. Only when we know who and whose we are, can we understand the implication of faulty worldviews.

Secondly, to effectively navigate culture, we have to know how to engage it in ways that will point back to Christ. Many pro-choice advocates will block or unfollow you the second you mention the Bible. Christians need to be able to address pro-choice arguments with evidence outside of theology to open the conversational door. Then, when the cards are on the table, we can show how each one is affirmed within the biblical worldview.

General Jim Mattis once said that the most important 6 inches of any battlefield is the 6 inches between your ears. The abortion debate is no different. Before we tackle these arguments, our children, especially our teens, need to have a proper scope of the battlefield. And it starts by thinking well.

Clinical psychologist Jordan Peterson was asked in an interview if the state of an unborn child’s consciousness impacted his understanding of abortion. Peterson was silent for a few moments and then gave one of the best reflections on the issue that you won’t see in alt-left media: how, he asked, did we get here?

It sounds like madness, but these are the deeply philosophical and ethical questions rooted within the subject of abortion. You just won’t see them clucked over by the passionate Hollywood actors on your average daytime talkshow.

The problem? Without the Creator, you lose the inherent dignity that protects each human being regardless of their stage in development.

Instead, pleasure is god, sex is as good as salvation, and self-interest becomes the standard of morality. Sin then becomes whatever gets in the way of pleasure, sex, and self-interest, and it often shows up crying and in need of pampers.

Abortion becomes a false cross offering earthly salvation, health, and prosperity. In reality, it’s the antithesis of the Gospel.

It took generations of worldview discipleship to get us to a point where mothers bring their 8-year-old daughters to protest the right to destroy their future children.1 Call me crazy, but if you don’t want your child tear-gassed, you shouldn’t keep them around a protest when things start to get ugly, but that’s just me. So we can’t expect change to happen on a dime. We can help our children break this cycle of brokenness by not getting caught up in emotional appeals and reflecting on the history and implication of the worldview blasting through their media feed. Kids need to know that abortion is the logical conclusion of a century of secular materialistic philosophy. Click To Tweet

2. What are they searching for?

Worldviews express what a person believes about the core questions of life. They also reveal what a person is searching for, and they’re desires are not that different from yours and mine.

People want security. We want pleasure. We want to be loved, cared for, and to live a life free from stress, fear, and abuse. None of these are wrong in and of themselves. The problem is that these are yearnings for things that cannot be guaranteed this side of heaven. But for the person who has a secular worldview, there’s no light at the end of the tunnel.

Earth, Laura Powell says, is the closest some will ever get to heaven. So they’ll gravitate to a worldview that promises earthly salvation without realizing that it’s subtly stripping them of inherent human dignity.

We do not deny that the subject of abortion has immense depth. Or that the brokenness of this world leaves so many feeling helpless and weak. Culture is broken, but the longings of our hearts cannot be found by continuing the extermination of unborn children. It can only be found in setting our hopes in Christ.

Lastly, we need to remind our kids to keep reasonable worldly expectations. If your children are pro-life they need to understand that they are going to get canceled. They will get unfriended. They will have Twitter trolls screaming that they’re racist, indoctrinated, women-hating, bigots. They need to know that it’s ok to be hated for truth.

“If the world hates you, understand that it hated Me first.” John 15:18 (quoting Jesus)

Teens need to know that following Christ has a cost. It immediately sets you against the principalities of this world and that world is going to push back. But Christ has overcome the world. And it is His word that has power. Not social media groupthink.

Encourage your teen that as believers we are to seek righteousness, not worldly accolades. We’re here to seek truth, not trendy lies. We are to be fearless in the faith, not worldly wuss bags.

That means we’re going to take a few hits. Bring it. Cancel us. See how that goes. I can promise you, honey, we were given spiritual armor for a reason, Ephesians 6. And you can bet your biscuits our babies are going to know how to wield it. Their mama showed them how.

This isn’t indoctrination, it’s education. And the best way we can raise righteous kids is to equip them to think well. If your children are pro-life they need to expect to be canceled, unfriended, and have Twitter trolls screaming that they’re racist, indoctrinated, women-hating, bigots. They need to know that it's ok to be hated for truth. Click To Tweet

In times like these, false ideologies will utilize human shields to protect the lies of the enemy. If you have had an abortion, please know that this blog is not a personal attack against you, but a response to the ideological strongholds set up against the knowledge of God, 1 Corinthians 10:3-5. There is grace, mercy, and redemption for all who kneel at the cross. We are not here to judge you.

If these thoughts of a roaring mama bear rub you the wrong way…stay tuned. The next post will really ruffle your feathers. But before you blow up the comments section, ask yourself why; why are my feathers ruffled?

If you’re a Christian, it’s possible that you’ve accepted some postmodern teachings2Check our Alisa Childer’s ministry and her chapter in our first Mama Bear book to learn more about the dangers of progressive Christianity. https://www.alisachilders.com in the name of feminism and women’s rights. Tread carefully. The lies of Genesis 3 are still unfolding today, and modern-day Eves are still being duped.

Let me assure you, as one humble believer to another. If you think Jesus loves us so much that there is some part of ourselves that need not be laid down at the cross, sweetheart, that ain’t Jesus.

If you’re a nonbeliever, let’s be honest, you knew what you were getting into when you came to the Mama Bear blog. And I’m glad you came! Let me challenge you for the sake of friendly conversation: stay tuned to our next post. See what pro-lifers have to say. I promise we’re only half as crazy as Joy Behar likes to make us out to be.

To everyone. Don’t mistake the passion of this post as a green light to destroy your pro-choice friends on social media. We are called to be salt and light. Salt brings out the flavor and heals wounds, but it stings in the process and too much will ruin a meal. Use them in the right proportion (Colossians 4:6).

Above all, be fearless for Christ.