Prepping Your Kids for Pride Month 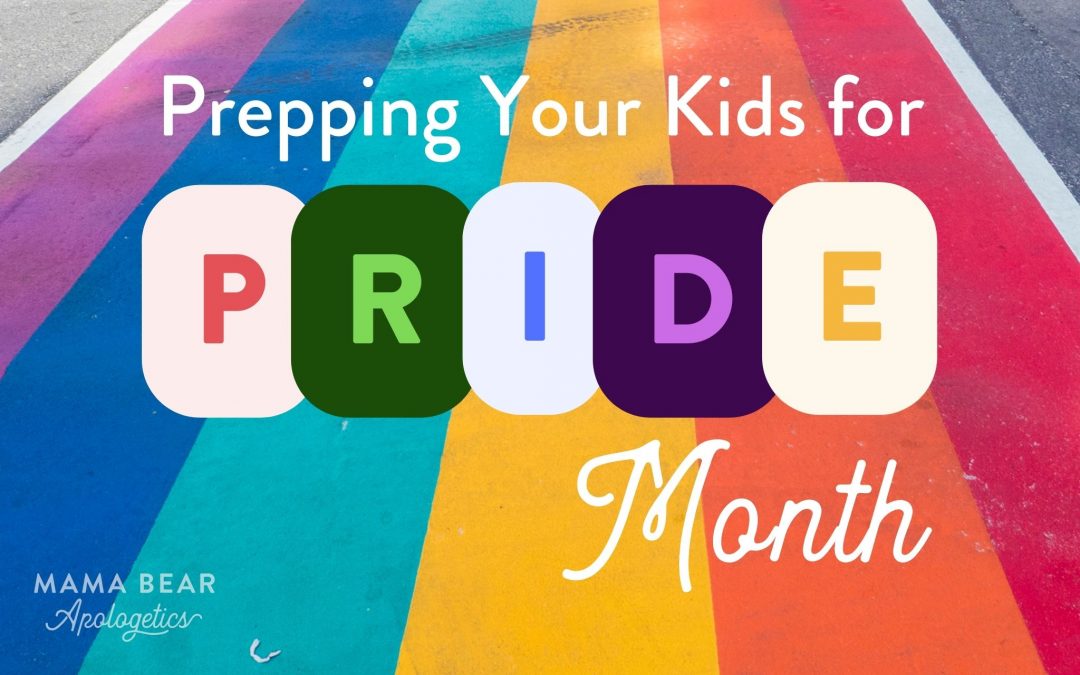 The influx of over-priced swag might catch some parents off guard. But we here at Mama Bear know that this can be a great teaching moment to discern truth before the parades assemble. So, let’s take a quick look at the top slogans you and your children are going to see during Pride Month.

What it Means: This one has been around for decades but it’s worth a fresh look. What they’re saying is that any expression of romantic love (or sex) between consenting individuals is morally equivalent to the romantic love between a man and a woman. It’s the lovin’ feelin’ (affection) that makes it good, not the context or gender of those involved.

The Problem: Morality gets seriously problematic whenever we try to ground it in anything other than God and His purposes. If there is a design for our bodies and our relationships (and Scripture is pretty clear on this–1 Thessalonians 4:3-8), then any expression outside of that design isn’t pointing to the transcendent reality that sex and marriage were intended to point to (Ephesians 5:31-32).

The Truth: This standard isn’t just for LGBTQ+ people. Cisgender heterosexuals don’t get to hop off the morality train just because they’re attracted to the opposite sex. All of us are to submit to God’s design because rejecting God’s design for sex is rejecting God according to 1 Thessalonians 4:8.

The Teaching Moment: Read 1 Corinthians 6:12-13 with your child and discuss the reasoning of the early church of Corinth. What were they trying to justify? How could these things become a sin? Can concepts like love exist without boundaries? Why do we need an objective standard of truth to discern these boundaries? How do moral placeholders like consent, pleasure, and commitment fail to adequately define love? (Hint: see chapter 8 in the MBA Guide to Sexuality.)

The Problem: Despite being grammatically clunky, it’s the implicit messages lurking within that are the biggest issue. First, it implies that the Pride community is the only place LGBTQ+ individuals are welcome.

Second, the LGBTQ_ ideology encourages LGBTQ+ individuals (especially kids) to cut-off cisgender haters who don’t endorse that lifestyle, effectively isolating them from anyone outside of the Pride community.

Lastly, only those who are LGBTQ+ advocates are welcome. Anyone else, including sound non-affirming medical professionals, are kicked to the curb. Prepping Your Kids for Pride Month Click To Tweet

The Truth: Despite what LGBTQ+ people have been told, you are welcome within the church. You can even pick which kind of sinner you’d like to sit next to, and people will gladly make room! No, you won’t find sexual sins endorsed.2Yes, there are churches that have put Scripture through the filter of queer theory. Meaning they have removed (or deconstructed) any passage that affirms God’s design for our bodies and sexuality. But any time we use an ideology to filter God’s Word, we aren’t growing closer to God, we are creating a false one. Just like you won’t find the pastor preaching on the goodness of being a greedy, lying, gossiping, gluttonous, busybody. But you will be welcomed into the body of believers, encouraged to take up your cross, and affirmed for who you truly are: an image-bearer of God.

The Teaching Moment: Read about Jesus’s ministry to the lost in Mark 2:13-17, Matthew 19:13-15, and Matthew 8:1-15. Who did He welcome? How did He minister to them? How does His example show us how we are to love those around us? Does loving another require that we reject the truth about sin? What is a way we can be welcoming to someone with different beliefs or lifestyle Despite what LGBTQ+ people have been told, you are welcome within the church. You can even pick which kind of sinner you’d like to sit next to! We're all equal at the foot of the cross. #pridemonth #trueequality Click To Tweet

What it Means: This follows along the same lines as love is love but has limitless application–and right now it’s being especially applied to gender identity. The good kind of equality makes sure that basic rights to housing and job opportunities can’t be restricted against LGBTQ+ individuals. The bad kind argues that bathrooms, locker rooms, shelters, and even prisons must also be freely accessible to any person based on their gender identity.

The Problem: It’s not hard to see the issues with this one. Just look at sports. From a biological level, a male body is different from a female body. You can take as many hormone blockers are you want; a biological male is most likely going to crush the female competition. Just look at Lia Thomas.

When we allow transwomen to compete against cisgender/biological women, we haven’t made things ‘equal,’ we’ve virtually eliminated cisgender women from women’s sports.

Secondly, men are separated from women in bathrooms, locker rooms, shelters, and prisons for the dignity and protection of the weaker sex: women. Without this separation–based on biology–there is no way to distinguish between those who truly identify as the opposite gender and those who are faking it for their own gain. This won’t stop same-gendered violence, but it does ensure that women are protected against male predators.

The Truth: As the saying goes, “Freedom isn’t equal, and equal isn’t free.” Kids need to know that just because something isn’t equal doesn’t always mean it’s bad/wrong. Lots of things in life aren’t equal: women get more time off work for maternity leave than men. Men, on average, are physically stronger than women.

In fact, it was the inequality of Christ’s death on the cross that paid the price of our sins and justified us before God.

Teaching Moment: Discuss examples of when inequality is actually a good thing, like how hospitals give each patient different treatments. Next, discuss when inequality is a bad thing, like giving one sibling a full dinner while the others just get to watch him eat. Show how when we look at Scripture, we see that men and women were created differently and that each of us is deserving of an equal share of God’s wrath. However, because Christ loved us, He died for us so that all people who profess faith in Him are welcome in Heaven. That’s true equality. The good kind of equality makes sure that basic rights can’t be restricted due to sexual or gender identity. The bad kind argues that bathrooms, locker rooms, shelters, and even prisons must also be freely accessible to any gender… Click To Tweet

What it Means: This became the trending hashtag of 2015 when the U.S. Supreme Court legalized same-sex marriage. It celebrates the ‘equality’ of gay marriage and makes an appearance any time pro-LGBTQ+ laws are passed. In essence, only the LGBTQ+ advocates are loving in the right way, and history will show anyone who disagrees with the ideology as the bigots that they are.

The Problem: This final slogan is a culmination of the previous three, and like them, it has one of the biggest flaws of all. If love is love, then the boundaries that confine it are strictly cultural.

Prior to the Supreme Court’s ruling, marriage was between a man and woman, consistent with God’s design. Now we’ve shifted to “two consenting adults.” The problem is that there’s nothing in place to stop marriage from being redefined into all sorts of craziness: like a thruple or potentially eliminating age requirements.

This has been accused of being a slippery slope fallacy, but it’s a slippery slope reality. Just follow the logic. The LGBTQ+ ideology already claims that young children can make life-altering decisions regarding their bodies. What’s to stop it from saying that children can be in love with someone decades older or vice versa? Only social convention.3If you’ve ever read “The Overhauling of Straight America,” this result is very much an acknowledged possibility. http://library.gayhomeland.org/0018/EN/EN_Overhauling_Straight.htm

The Truth: Love didn’t win on June 26, 2015. That was plain ol’ social caving to a false idol made in our culture’s image (Romans 1:21-23). No, love won over 2,000 years ago when Christ laid down His life for you, me, and the rest of humanity–that whosoever believes in Him shall not perish but have eternal life (John 3:16).

Teaching Moment: If you haven’t already, check out our blog, “When Adam and Steve come to Dinner.” It’ll help you discuss the difference between biblical and civic marriage, so your kiddos know that there’s a huge difference between the two. Next, point out how words like love and equality are being misused. Ask your kiddos why accurate definitions are necessary for truth. You can use silly examples like switching the definitions of cake and broccoli to show how words matter. For older kiddos, ask what a false understanding of words (like “love” being only affirming the LGBTQ+ ideology, and “hate” being those who don’t) can lead to, especially regarding the church and Gospel. Bonus points for discussing the good, bad, and ugly of allowing feelings to act as a filter for truth.

Pride Month can feel daunting. Especially knowing that your kiddos’ cartoons are going to promote the LGBTQ+ worldview. But take heart mamas. As Dr. Doug Flanders encourages, “Parents aren’t meant to child-proof the world, but world-proof the child.” Use what the world is giving you to speak the truth and shine a light in the darkness.

*Disclaimer: Previously, the “love is Love” section contained the statement: “At its core, love is love is just another way of saying sex is sex.” This has brought some confusion and needs a little nuance. We are not saying that love is just sex. Hence, the differentiation at the beginning of the section between romantic attraction and the physical act of sex. However, both share the same fundamental problem when they lack objective grounding: they lose all meaning.

So yes, I agree with you, love isn’t just sex. But if there’s no objective design then love and sex each become meaningless.*

Got more questions about sexuality? Check our our recently released book Mama Bear Apologetics Guide to Sexuality: Empowering Your Kids to Understand and Live Out God’s Design.