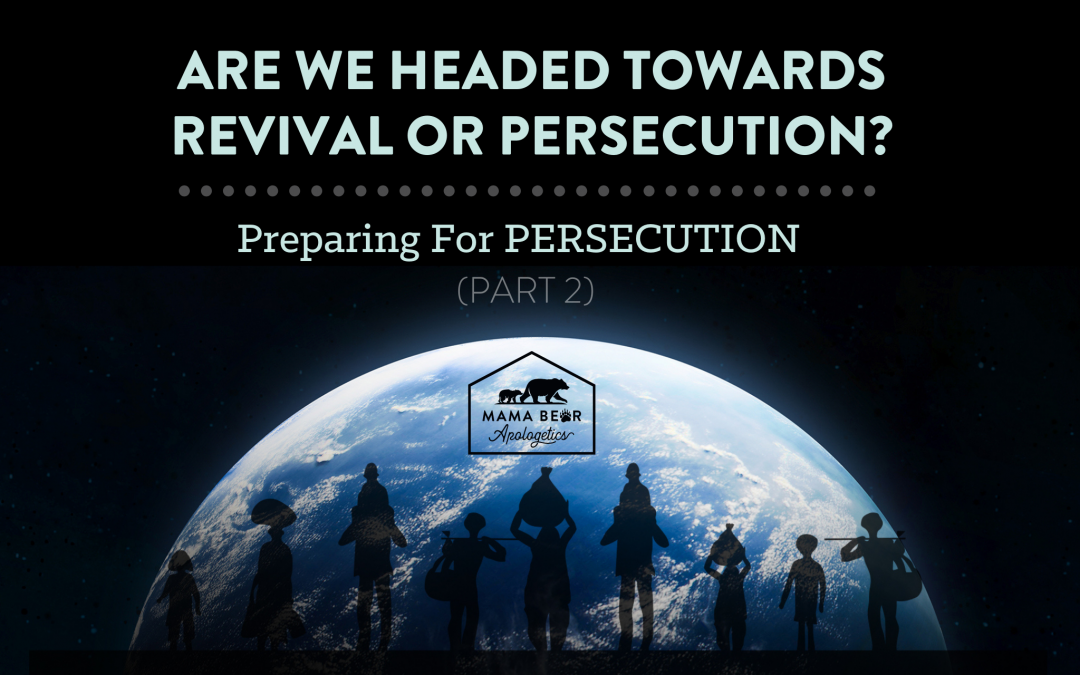 This has been quite a week, has it not? Or heck, this has been quite a year. Even the weather is rebelling. I’m sitting outside in short sleeves and flip flops, and I’m hot… in Iowa… in November. John is usually snow blowing the driveway by now. (Not that I’m complaining! This Texafornian girl is thankful for the extended autumn.) But it is weird.

We began this short two-post blog series a few weeks ago, talking about reading the times. Are we in for revival or persecution? Or both? And how do we plan for them?

As mentioned in the earlier post, revival and persecution often go hand in hand. It has been easy (or at least easier) to be a Christian in America. Much easier than for our European Mama Bears or our Mama Bears down under. (Holla y’all!)

American evangelicalism, despite its many, many flaws, has also been a great holdout in our nation, slowing the decay. But by being dominant, we have become soft. We have become cold. We have taken our faith and our “rights” for granted. In short, we have more closely identified with our countries of origin than our country of retirement. But we can’t forget that we are first and foremost citizens of heaven. Hardship is in our spiritual DNA. This world may be our country of origin, but it is not our country of retirement. We are foreigners and temporary residents here. We need to start acting like it. #holiness #persecution Click To Tweet

I fear that in our ease, we have forgotten how to suffer. And I’d love to say that we are purified through prosperity, but that’s just not true. For better or worse, we are purified through difficulty. And friends, the Lord is purifying His church right now. He is preparing His bride for the wedding, plucking and pruning away our rough edges so that we can be presented spotless and pure. As all women know, physical beauty can be painful (especially the plucking part). Our spiritual beauty is no different. It is time to remember what we signed up for when we declared ourselves Christian.

1. We’re not here for our best life now

I can’t count the number of times growing up where becoming a Christian was linked with an “improved life.” Like “Are you having a ton of problems? Bring them to Jesus. Everyone come forward who would like to give their problems to Jesus.” Of course we had a whole slew of people come forward! Who doesn’t want to get rid of their problems?!?! And are there a lot of problems that Jesus can help us with? Absolutely. But you may have bought into a false Christianity if you think that accepting Christ gives you an improved life now.

Ask a former Muslim from the Middle East if they have an improved life now. Ask the Christians in jail from persecuted countries if “coming to Jesus” was the magic wand for taking away all their problems. I cannot emphasize this enough: if a theology is not true for the persecuted church, is not true. Period.

2. Know what persecution is and what it isn’t

For you and me as kids, being “persecuted for the faith” probably amounted to getting teased for not drinking at a party or not sleeping around. And as a whole, the closest thing to “sacrifice” most Christians have experienced is not being able to sleep in on Sunday mornings (though of course there are exceptions). Or maybe we have felt that we needed persecution, so we loudly proclaimed our Christian morals on social media and then patted ourselves on the back when trolls came out and called us names.

Doing a word study on persecution reveals a theme: we are to be persecuted for a very short list of things: proclaiming the Word (the resurrection of Jesus) and obeying the Word (Christian morality/personal righteousness).

But sometimes we get this backward and pass our backward thinking on to our kids. So take note: we are not to be persecuted for proclaiming Christian morality. In fact, Paul poo-poos this notion in 1 Corinthians 5:12 when he says, “What business is it of mine to judge those outside the church? Are you not to judge those inside?”

We are to be persecuted for being righteous ourselves. And again, not self-righteous. Just plain ol’ righteous. Meaning that we do not participate in the immorality of the world. And the difference should be so stark that people are shocked (1 Peter 4:4). Our persecution will reflect our obedience to God. It should not reflect our demand that the world obeys God. We proclaim Christ, and the Holy Spirit convicts mankind of sin. Let's not get this backward. Click To Tweet

3. We may have to obey evil authorities

Romans 13 says “Let everyone be subject to the governing authorities, for there is no authority except that which God has established. The authorities that exist have been established by God.”

I posted a YouTube video on this a week ago, but it was incomplete. I failed to mention the other less-obvious biblical precedents I have noticed peppered throughout Scripture. For example, the Exodus story.

When the Lord freed the Israelites, He didn’t do it through mass protest and revolt. No. Moses kept going to Pharoah asking for permission. And until Pharoah granted permission, the Israelites didn’t leave. Even in their bondage, God worked through the proper channels to free His people, and they didn’t leave until they were released. (Our “proper channels” are much more expanded today than back then, but that’s for another day.)

A second example is in Revelation 13:5. I’ve read it before, but it’s like I read it for the first time in light of the point I’m making about obeying authority:

“The beast was given a mouth to speak arrogant and blasphemous words, and authority to act for 42 months… Then the beast was permitted to wage war against the saints and to conquer them, and it was given authority over every tribe and people and tongue and nation.”

Given authority… permitted… these are all phrases which tell us that even those who “wage war against the saints” are subject to the Romans 13 clause.

There is probably a lot more I could say on this topic, and I probably will in the upcoming months/year. But suffice it to say for now, that our world is changing. We as Christians in the West are no longer the majority view. And even the true Christians within the Christian church are a minority. We have stretched to accommodate the culture as far as we can, but I predict a time is coming when we will have to revisit our previous concessions and do a massive reset. Like a rubber band stretched to the max, it is time to snap back to the form of Christ and embrace our identities as foreigners in this world, not conforming to the world but being set apart. Are you ready?