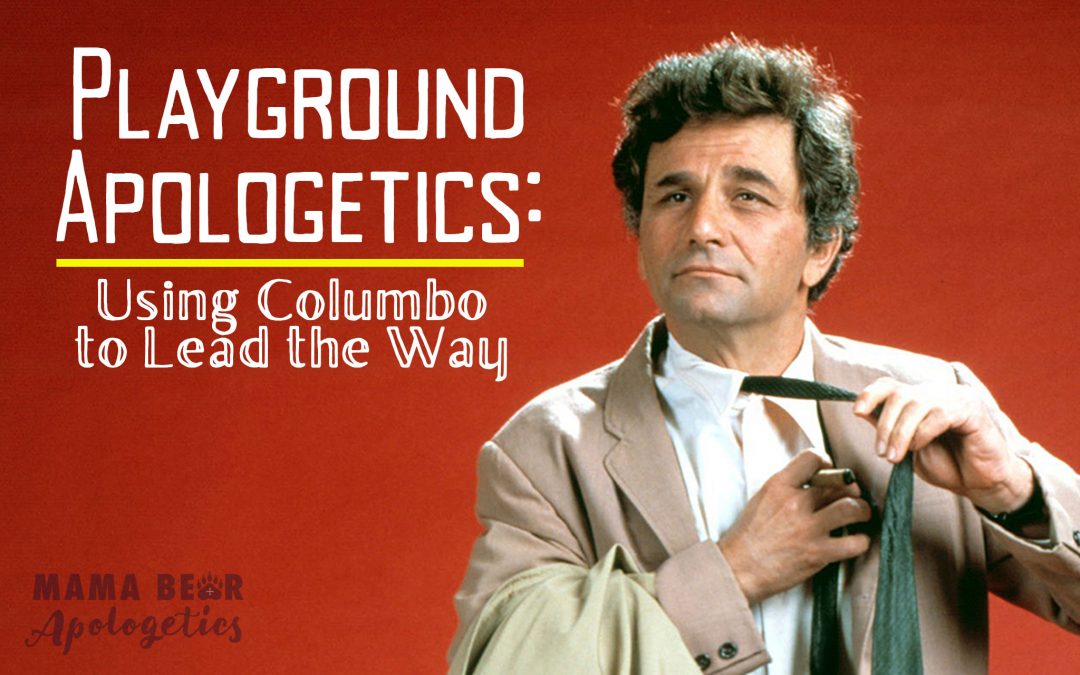 Welcome back to Playground Apologetics, Mama Bears! It’s been a while since we did an article for this series, but in the lead up to my breakout session at the Women in Apologetics Conference this weekend, we thought it would be fun to bring it back!

Apologetics can seem scary until you feel comfortable with the bag of tools at your disposal. “Doing apologetics” doesn’t have to be some long-winded monologue. With just a few simple questions, you can start engaging in apologetics conversations right where you are planted, and you don’t even have to be an expert! In our previous articles, we discussed the questions, “What do you mean by that?” and “How did you arrive at that conclusion?” Today, we will tackle the final tactic in Greg Koukl’s series:Tackling question 3 in our Playground Apologetics Tactics series! #tactics #playgroundapologetics Click To Tweet

Using Columbo to Lead the Way

First, does anyone remember who Columbo is? Columbo was a bumbling homicide detective in the TV series from the late 60s and early 70s, Columbo. He was known for getting to the bottom of the cases he investigated by asking, “Do you mind if I ask you a question?” This simple technique would usually get the person talking, and more often than not, get them to confess to the crime.

Koukl’s Columbo technique includes a wide variety of questions so that you can steer the conversation in any direction you wish to go. Koukl uses the metaphor of a house. A conclusion is like a roof, and the reasons for a conclusion are like walls holding up the roof. More often than not, people will state their conclusion (roof) without explaining any of their reasons behind it. Using the Columbo technique, we ask questions about the reasons behind the claim. In essence, we are lifting the roof off to see what supports it. The Columbo technique dives deeper than the first two questions and uncovers more about what the person thinks. For example, a person might say, “Oh the Bible is just literature written by men.” You might use the Columbo technique by asking, “And how do you know that the Bible is not divinely inspired, but merely literature?”

The Columbo technique is different than our previous two playground apologetics questions in that, instead of asking open-ended questions, you are asking pointed and directed questions that  “turn the tables,” as Koukl puts it. You can use a question to change the tone of a conversation or redirect its path. Maybe someone asks why you care so much about the curriculum in schools “if it’s all supposed to be neutral.” You might respond, “Well, I’d love to share that with you. Full-disclosure though, my Christian worldview shapes my opinion on this. Are you okay if I explain it fully?”

You don’t want to launch into a full explanation if they were just making idle conversation, and it gives them the opportunity to change the direction of the conversation if they are not comfortable hearing about your Christian worldview. This also allows you to see exactly who you are interacting with. If a person is uncomfortable hearing about the Christian worldview in regard to school curriculum, they are probably not ready for a full-blown spiritual conversation. Knowing who you are talking to allows you to keep the conversation meaningful and productive without blindsiding or overpowering your new friend. Spiritual conversations will come. Our job is to start by intentionally planting the seeds of thought during our chats on the park bench.Knowing who you are talking to allows you to direct the conversation in a meaningful direction without blindsiding or overpowering your new friend. Click To Tweet

I once used the Columbo tactic in a discussion on legislating abortion. A fellow mom was sitting next to me at the park, scrolling through her Facebook feed. She commented on how many people had unfriended her since she started posting political commentary, shocked and irritated that so many people in our town opposed her pro-choice views.

“Oh really?” I asked. She added that she was “choosing not to care” because she is passionate about this topic, and found the loss of so-called “friends” worth the price of her convictions.

A person who is passionate about their beliefs will often welcome the opportunity to discuss them. I saw the open door and walked right through it. I said, “I really appreciate people who seek genuine dialogue about controversial issues and know why they believe what they believe. If I told you that I was pro-life, would you be interested in talking about how we each came to our conclusions?”

She readily accepted the invitation to chat, and I think was eager to do so given how her online endeavor was going. It ended up being one of the most interesting and fruitful conversations on abortion I’ve ever had, and gave me great insight into the oft-used rhetoric about “women’s healthcare.” I was afforded the time (perhaps providentially) to really do some Tactics. Some of my questions were, “Did you know that the unborn baby has its own unique set of DNA from the time of conception? Does that make it different to you than say, the mother’s appendix, which has her own DNA?” I could see my questions spurring thought in this sincere woman.

When I “took the roof off” her arguments to see what supported them, she was able to examine her beliefs, for what seemed like the first time ever. We sat and had a lovely conversation, right there on the little south Texas park bench behind my house.

Chances are that God put you exactly where He wanted you to be. You, mother of a toddler who needs a very specifically cut grilled cheese sandwich, have been called by God for Kingdom work. Whatever your housing situation, you are right smack in the middle of your own personal Jerusalem (or in my case, it feels like the literal ends of the earth). Don’t forget that Mama Bears! You are God’s missionary to your own local park bench. How can you be God's missionary to your own local park bench? Columbo has a few tips. 🙂 Click To Tweet

Do you have an example of when you’ve used the Columbo tactic? Share it with us in the comments!

We’d love to have you join us at the Women in Apologetics conference this weekend, but if you can’t make it in person, there is a LiveStream available! Register for it here.