An Open Letter to Moms Without Children 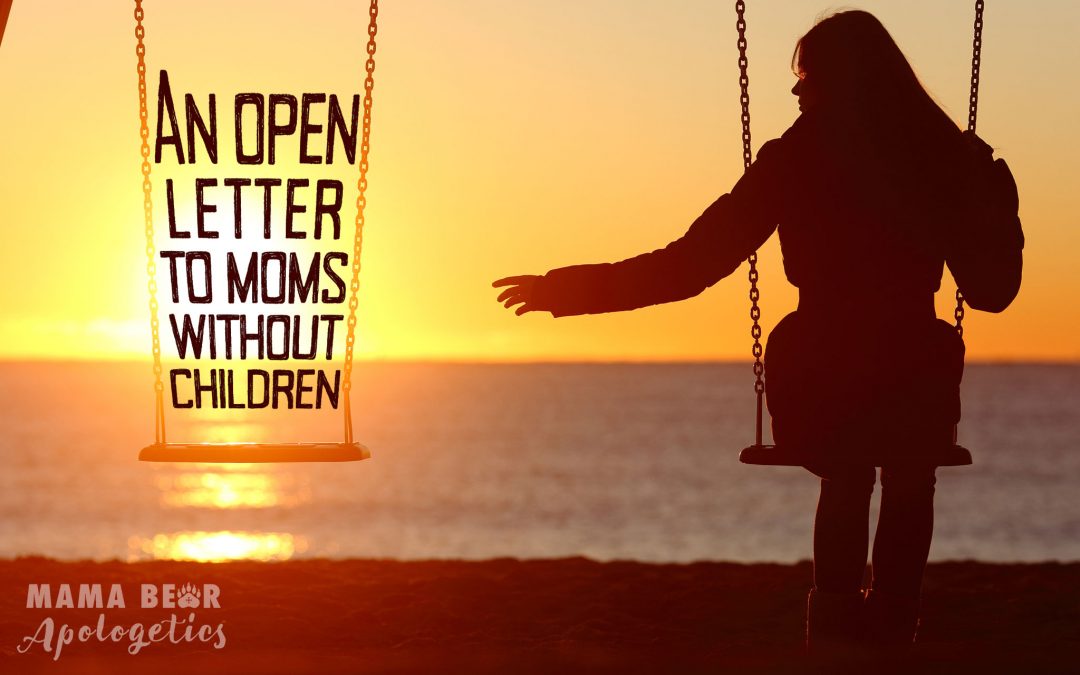 The idea of being a mother, but not having children sounds odd to some people, and yet I believe it is a painful reality that plagues more women than we realize. There are a lot of ways a woman can end up as a childless mom. The most obvious is, of course, the woman whose children have died. I have heard the cries of women who have lost their child/children and wonder, “Who am I now?” Do you stop being a mother when your children die before you? What about when you give your child up for adoption?

There are some women out there who have survived multiple miscarriages. Each time they saw those double pink lines, their hearts leapt as they began planning for the life of their child, only to have it ripped away. How many times can a woman’s heart be crushed like this?

And there is still the phenomenon of woman who can’t get pregnant, whether that be from infertility, or life circumstances (like early divorce, widowhood, or prolonged singleness.) I know more than a handful of amazing, faithful, Godly Christian women whose hearts long for children, but who have not found a husband. This is of course painful in their twenties, but it becomes even more painful as they watch the years roll by past 30, 35, 40… I’ve seen many of these women become kindergarten or elementary school teachers, and several of them work as the best nannies money can buy, faithfully pouring into the lives of children who will hand their “Happy Mother’s Day” cards to someone else.
Being a mom is woven into many women's DNA, whether they have children or not. Click To Tweet

Unlike being a father, being a mother is something that I think is woven into the fabric of many women. You don’t usually see little boys carrying around baby dolls and talking about their future children. They are too busy pretending to be dinosaurs, or finding new and creative ways to destroy your furniture. There was a facebook post a few years ago about a woman who didn’t want to force any gender stereotypes on her daughter, so she bought her both traditionally “boy” gifts and “girl” gifts. She chuckled to herself when she came home to find this: 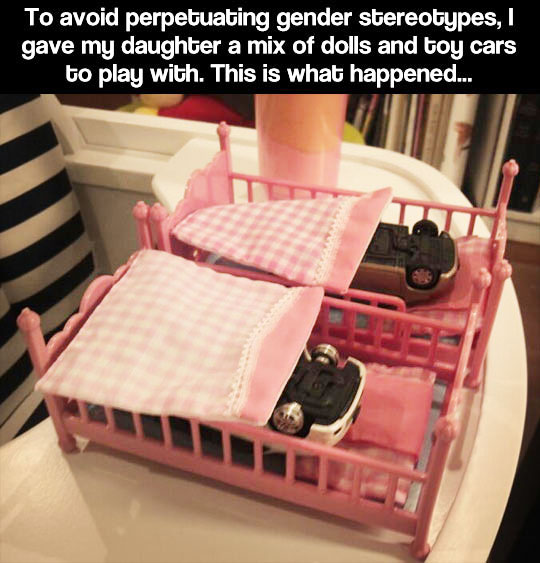 The mothering instinct can be so strong that is shows up in the tiniest of little girls. My sister was one of these girls. I often joke that she became a mom the day I was born. (I’m two years younger.) In middle school home economics class, my sister was making projects for her future children. In high school, she had already created a book of poems for them (whoever they were) to read every year on their birthdays – up until age 18!! What if she had not been able to have children? What if she had never found a Godly man to marry? Where do you put that mothering instinct when you are unable to have your own children? And especially, what do you do on Mother’s Day, when everyone else is celebrating, and the identity that you have felt in your heart since you were a child has either gone unrealized, or has been taken from you?
Where you do put the mothering instinct when you can't have your own children? Click To Tweet

There is a reason that Mama Bear Apologetics is clear that we are for mothers of biological, adopted, foster, and spiritual children. The title of “mom” is much bigger than just referring to a woman who has physically carried a baby in her womb for 9 months. In one of Jesus’ final moments on the cross, there is a beautiful exchange between the disciple John, Mary the mother of Jesus, and Jesus. In John 19:26-27, Jesus looks at Mary and John and says “Woman, behold, your son!” Then He said to the disciple, “Behold, your mother!” Jesus recognized that the role of mother and child transcends biology and inheritance. The role of mother and child is all about relationship.

We cannot choose what life brings us, but we can choose what we do with the time we have been given. We can sit around wallowing in our childlessness, or we can choose to pour into the lives of young people. Jesus passed his earthly sonship on to John because he knew that he (Jesus) would not be around to take care of his mother as she aged. Working as a teacher in the past, I have seen children who have been all but abandoned by their parents, even though their parents are alive and living with them. I’ve had students who didn’t understand basic concepts like bathing, or personal hygiene. I don’t say this in jest, and I don’t say this to condemn. I say this because these are basic life skills that were legitimately not passed onto them, and they were teased by the other kids for it.

For all the girls who grew up with dollies, dreaming of the day when they would hold the real thing, do not give up! Do not get beat down. It takes a village to raise a child, and you are part of that village! We need you in Sunday Schools. We need you in the classroom. We need you in women’s ministry. The single mamas need you as faithful friends who will journey with them. We need you as mentors, as Ratio Christi directors, and we need you as Mama Bears.

And in case you think I am speaking out of the bounty that God has given me, just remember: I do not have my own children. I thought God was crazy when I felt the calling to start Mama Bear Apologetics. “Who is going to listen to me? I don’t have kids.,” I told Him. But you know what I DO have? I have more time than most moms, and I have vowed to use every bit of that extra time to be a spiritual mama by pouring into the village that I have been planted in, by pouring into the tired, exhausted, worn out moms who don’t have time to do things like… run a website, produce two podcasts, and read a thousand books. I don’t even have the physical health to adopt or foster, but what health I do have, I am using to try and reach this next generation. Whatever you think you have been given or not given, use what you got.  Do not waste the time that God has given you. Do not waste a healthy body, because there are some of us who would love to have one. One day we will stand before the Lord, and he will reveal to us just how many “children” we have in heaven – people who would not be there without our impact.

The Christian life is predominantly about living for eternity. So work hard Mama Bears! Work hard to raise up the children God has given you, whether that be through biological, adopted, foster, or spiritual means. If God has not given you your own children, refuse to listen to the enemy who wants you to squelch that mom-instinct. Abraham was told that his descendants would “outnumber the stars in the sky,” but Romans 9 shows us that these are not physical descendants, but spiritual. If he can be the father of many nations, YOU can be the mama of at least your own little tribe.
Mama Bear Apologetics is for mothers of biological, adopted, foster, and SPIRITUAL children! Click To Tweet