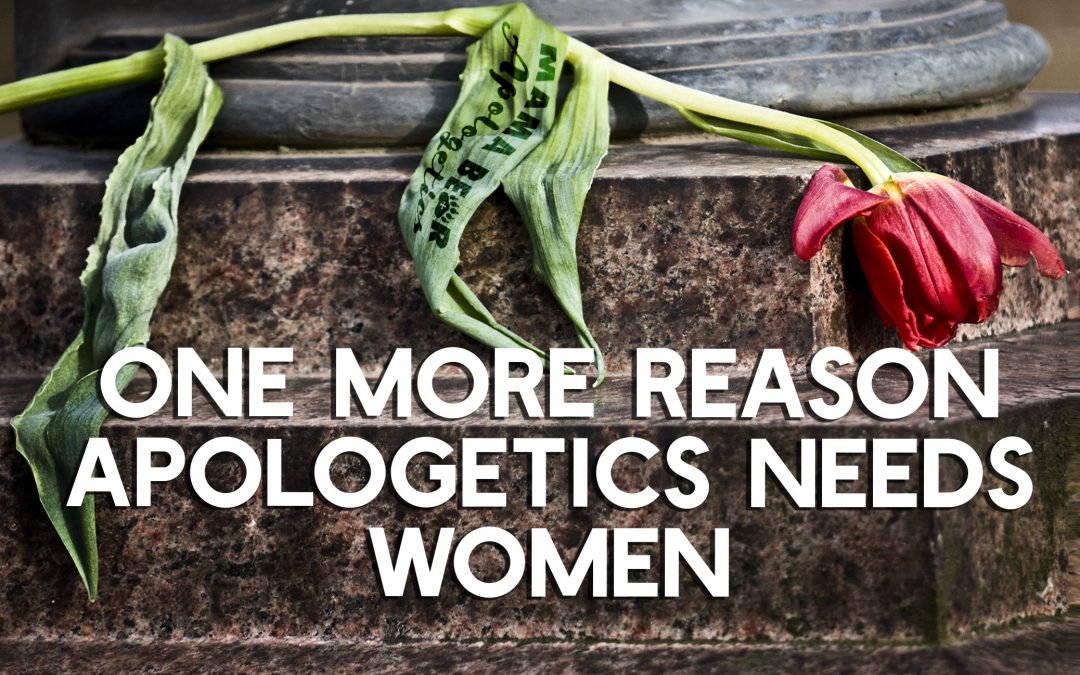 In January, I wrote an article for CrossExamined.org titled “Yes, women need apologetics, but more importantly, apologetics need women.” In it, I describe 6 main attributes that women bring to the table when it comes to apologetics. Today, I was reminded of one more, in a very personal way.

My husband John and I had to have a tough conversation today. There was a ministry that we were involved in, and it became increasingly apparent that it was not a healthy situation due to a disturbing dynamic between two key leaders. I don’t want to go into details out of respect for persons involved, but suffice it to say, we did not feel at liberty to leave the group unless we addressed the issues that we saw.  When you encounter to a toxic issue, it is often easier to just part ways, remain on good terms, and stay silent. But we're not always called to take the easy road. Click To Tweet

It would have been easier to say nothing, part ways, and remain on good terms. However, we are not always called to do the easy thing. But doing the hard thing – by speaking truth into a situation – usually comes at a cost, and it is essential that we as apologists (and Christians in general) have a soft heart when approaching these difficult conversations. Otherwise, we run the risk of developing blinding arrogance, appointing ourselves as God’s anointed purveyors of truth, and fooling ourselves into thinking that our manner of delivery doesn’t matter. Let the truth bombs fall where they may! It’s up to God from there!

False. Our manner very much matters, and it especially matters when the information is coming from a woman to a man.

As soon as we were done with our meeting, I immediately wanted to go see our pastor. It took a little while to articulate what I was needing, but I finally identified is as a “chaser conversation.” (For anyone who has had to take bad medicine, you know what a chaser drink is. You swallow the foul tasting medicine, and immediately swallow something else that tastes good so that you don’t have that bad taste in your mouth.)

In our “chaser conversation,” I was allowed to emotionally process what had just happened. I had known that our character was going to be maligned at the meeting. I had known that the person we were confronting was going to be very condescending. He did not disappoint. He kept laughing at us and saying to the other person, “You see the level of pathology here? Do you see the fabrications they are making up? Please! Continue! I’m quite enjoying this!” Righteous anger is incredibly empowering. It is also incredibly blinding. Click To Tweet

During the week, as John and I prepared for what we had to say, I had the luxury of feeling angry. I won’t lie; righteous anger is incredibly empowering. However, righteous anger is also incredibly blinding. I think that is why we are told, “In your anger, do not sin.” (Ephesians 4:26) So for the day prior to this meeting, I had to get my heart right. I had to let go of my Mama Bear fighting instinct, and instead, adopt the attitude of a servant who is about to be beaten. And that’s how I felt during this meeting.

As women, one of the most powerful tools we possess is tenderness. We were created as nurturers. If you look at the caregiving professions (nursing, elementary teachers, social work, etc.) they are predominantly female. I can go into defender mode, but that involves putting on emotional armor. Emotional armor is great for battle, but this was not a battle. It was a rescue mission. John and I believe that there is a sincere brother in Christ being manipulated by someone they trust, someone with whom he has a long history. We are the newcomers, so we already knew that our word would be weighed much less. It's important to be able to distinguish between a spiritual battle, and a spiritual rescue mission. Click To Tweet

Before we went into that meeting, I had to do the thing that scared me the most: I had to rid myself of all my emotional protection and emotional defenses. There are times to guard your heart, and times where you have to expose your heart, because – though you know it will be broken – the good of another depends on it. I felt like a policeman dealing with a hostage situation where he takes off his bulletproof vest, lays down his gun, and strips down to the bare essentials so that both the kidnapper and hostage can tell that he’s not hiding any weapons.  In certain cases, the only way to be heard is by being completely vulnerable, and accepting that you are likely to get hurt. As women, we instinctively want to guard our hearts. However, sometimes being used by God means that we allow our hearts to be broken for the sake of another. Click To Tweet

Colossians 2:8 says that people are being held “captive to hollow and deceptive philosophy.” As in any captive situation, we must first separate the hostage from the kidnapper. This is especially difficult when the hostage has developed spiritual Stockholm Syndrome, where they believe that the captor is their friend. A man coming into this kind of situation will often trigger the masculine defender mode in other men. As women, if done correctly, we have the ability to disarm in peaceful ways. Ironically enough, many of our characteristics that are perceived as “weakness” (our sensitivity, our emotions, etc.) become our very strength. Biblical femininity involves strength within weakness.

Our warrior men are amazing, and it would be easy for us to sit back and let them handle all the tough conversations. However, we women cannot simply avoid the difficult conversations just because we have a nurturers heart. In fact, I am convinced that difficult truths are sometimes only received from a nurturer. I won’t lie. There is always the possibility of being emotionally beaten up in the process, and I was. That’s fine. I expected to be, but it didn’t make it any less painful.We women cannot simply avoid difficult conversations just because we have a nurturers heart. Some difficult truths will only be received from a nurturer. Click To Tweet

John did very well in articulating our concerns in a straightforward and unemotional manner. He did great when having his character attacked and his motives impugned. We had nothing to gain from this meeting. However, I am also proud of the contributions I made as a woman. I was able to bring a balanced voice, affirmation, and tenderness to the conversation while standing firm in our critique. I may have been shaking on the inside, but I stood firm. I don’t know if any seeds were planted or any deceptions dispelled. Time will tell. What I do know is that women are important to these difficult conversations.