Why Doesn’t the Oldest Gospel Include the Resurrection? 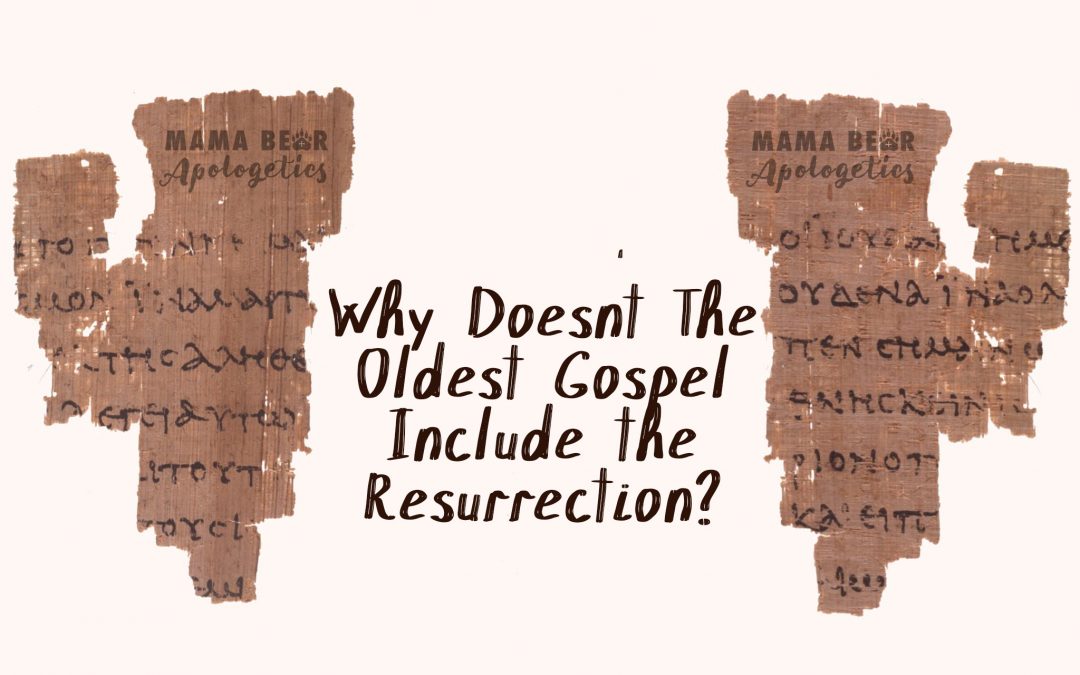 If the resurrection really was the central teaching of the New Testament, wouldn't we expect to find it in the oldest Gospel accounts? Click To TweetThis was a question I was asked on Twitter a few days ago. It included a bunch of other stuff, but that was the main gist. I very rarely answer critiques on Twitter. People on Twitter are seldom interested in an answer. Usually, they just want someone with whom to spar. I’m not really the intellectual “sparring type,” or at least I don’t get pleasure out of it like some people. I’ll have people throw out statements like the one above, coupled with things like “Christianity is 100% speculation!” (That’s how I know it isn’t a “serious” question.) Like I said, I usually ignore it. I’m rarely in the mood to spar. BUT, sometimes I am. 🙂

Usually, it’ll be around a topic where I think, “I know that question has an answer. . . I’ve HEARD the answer to that question. . . I just can’t crank it out on demand.” So, I take the opportunity to brush off my research skills and engage in a few rounds. If it looks like it’s getting ugly, I’ll excuse myself. Usually, it’s just a person accusing me of proof-texting or using evading techniques. This one seemed to think that my appeal to historical textual criticism was an evasive and vague “analogy.” Analogy? The process of historical textual criticism applied to the Bible, a historical document? Sigh. . . There are some misunderstandings that you can’t fix over Twitter.

Nevertheless, I kept it civil and thanked them for the respectful conversation when I was ready for it to end. And I wasn’t just blowing smoke. This person was more civil than others who only throw insults. He bid me a good day, and I think he really meant it, and I wished him well too. So, why not share my studies with you for the day? It would seem a waste not to!

If you haven’t noticed, take a look at the very end of Mark. In most Bibles, verses 9-20 are in brackets because the end of Mark is mostly nonexistent in the earliest copies. (Check for footnotes as well.) So, what do we do with this? Isn’t the Bible supposed to be inerrant? Is this proof that the Bible can’t be trusted?!

If this is your fear, I would like to first point you to the Chicago Statement on Biblical Inerrancy. It goes through the orthodox definition of “inerrant” which leaves room for discrepancies in the transmission that don’t affect doctrine. But beyond that, here are a few things that I told my atheist twitter friend:

1) You don’t need Mark 16:9-20 to get the resurrection
Contrary to my twitter friend’s impression, the resurrection is recorded before verse 9. Chapter 16 recounts the women visiting the tomb to put spices on Jesus’ corpse. However, when they get there, a man announces to them that Jesus had risen, and to go and tell “the disciples and Peter” that Jesus would meet them in Galilee. The paragraph ends with the women “saying nothing out of fear.”

Obviously that can’t be the actual ending. If the women actually said nothing, then we wouldn’t have a record of them saying nothing. We just wouldn’t have a record. Clearly, something is missing here. True, we don’t have the ascension of Jesus, but that has no bearing on the resurrection. And (to play devil’s advocate) if someone were trying to create a legendary “and they lived happily ever after” kind of ending, I don’t think the man/angel’s/resurrected Jesus’ last words would be telling the disciples where to meet him.

3) We have early references to longer versions of Mark
If the person is intent on camping out on the missing end of Mark, here’s one name you should know: Irenaeus. Irenaeus was a student of Polycarp, who was a student of John. That would be like getting information about the O.J. trial from Robert Shapiro’s protégé. John taught all he knew to Polycarp, who then taught all he knew to Irenaeus. This isn’t a game of telephone. This is how all history was passed on in the ancient world.

In Irenaeus’ book Against Ancient Heresies (composed around 177 AD), we see a quote from Mark 16:19, “So then, after the Lord had spoken to them, He was received up into heaven, and sitteth on the right hand of God” (Ancient Heresies, Chapter 10, section 5). In another of Irenaeus’ books, he records a certain group shortening a gospel. (This might be what one would call an “undesigned coincidence”) In the Ante-Nicene Fathers, volume 1, chapter 12, section 12, page 721, Irenaeus says, “Wherefore also Marcion and his followers have betaken themselves to mutilating the Scriptures. . . and curtailing the Gospel according to Luke and the Epistles of Paul, they assert that these are alone authentic, which they have themselves thus shortened.” (emphasis mine)

So, was there a longer version of Mark? Probably. The second-century writer Irenaeus cites it, and even a non-educated reader can attest that ending at verse 8 feels rather abrupt and unnatural. Was the end of Mark destroyed by Marcionites at some point? Who knows. We know one guy who accused them of it. Either way, we don’t need verses 9-20 to support a resurrected Jesus.

In conclusion, you will always have people who come at you with random factoids that you didn’t know about Scripture. Are there discrepancies in scripture? Yes. Most of them have to do with spelling or syntax. (But really, who cares if it is spelled Jon, Jonn, or John?) This passage (Mark 16:9-20) is one of the few that actually deals with doctrine. And even among this small portion that deals with doctrine, none of them are the only witnesses to said doctrine (as if nowhere else in scripture records this.) We could take Mark 16:9-20 out of our Bibles completely, and still have the exact same doctrine about Jesus’ life, death, and resurrection. All in all, I’m thankful that I engaged in my brief Twitter debate. It helped me organize my thoughts and gave me an excuse to fact-check the Irenaeus sources for myself, which I have now provided for you! And it reminded me of an important lesson that I dare not forget: Don’t fear the questions or accusations. The word of God stands to scrutiny.Never fear questions or accusations. If the word of God is true, it will stand to scrutiny. Click To Tweet