Oh, Baby! Responding to Cultural Lies About Having Children 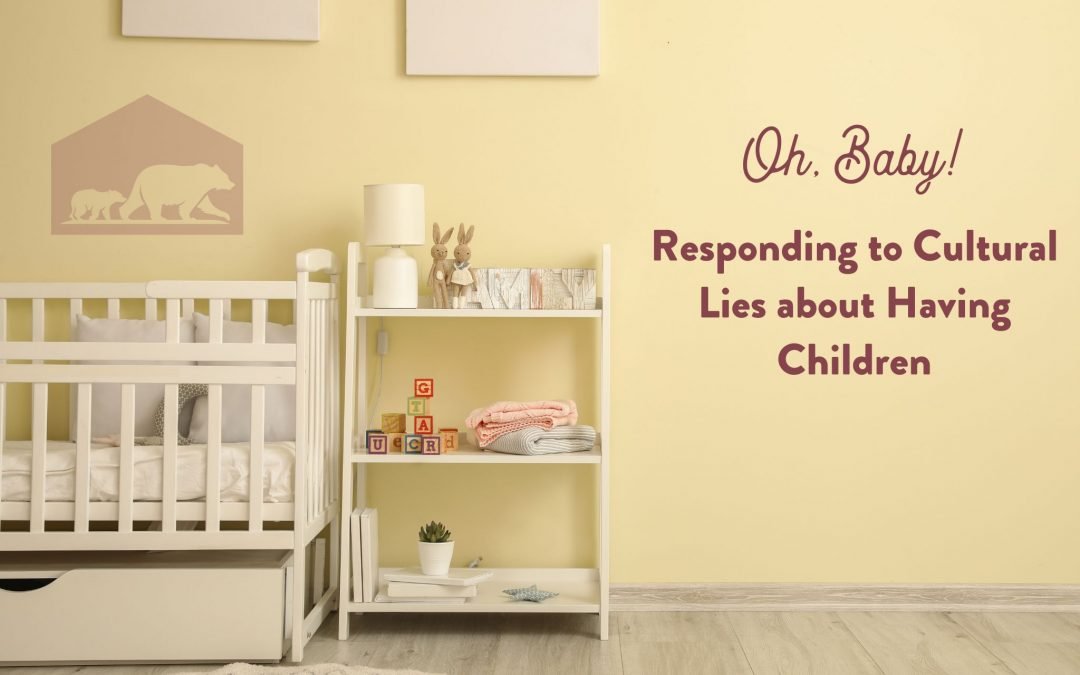 Note: This blog is about having children, but we here at Mama Bear recognize that married couples without children are families. Children are not required to make a family complete. We are simply noting the decline in birth rates and some lies and truths related to that trend.

A staggering number of adults today are veering away from having kids. The birth rate has been trending downward since 2019, according to the Pew Research Center. They also report a significant uptick in people of childbearing age who say they probably won’t have any kids. What’s influencing their decisions? Well, there are the usual deterrents: kids cost a lot, kids are a lot of work, kids are a life-long commitment, etc…, but there is another force at work. When we analyze this trend, we uncover a heap of lies that Satan has been propagating for a few decades.

How did having children become such a heated controversial issue? I don’t know, but somehow, here we are. The attacks against children are intensifying.

Lie #1: Families with Children are for Losers

We’ve seen a steady degradation of fathers in the media for decades; Ward Cleaver and Andy Griffith were replaced by Al Bundy and Homer Simpson. Fathers have been reduced to bumbling buffoons; just dad bods with dad jokes.

Mothers, especially stay-at-home moms, are seen as “not college/career material” and therefore “less than” as if moms become moms because they can’t figure out any other way to contribute to society. Most recently, culture has been trying to erase the identity of mothers altogether by redefining and reassigning the title with more “inclusive” terms such as “birthing person.”

Kids have sadly taken the brunt of this degradation; they’ve been depicted as snotty little brats that suck the life out of you and ruin all your dreams – and much worse. I’ve seen comments on social media refer to children as “viruses,” “parasites,” and — perhaps the most disturbing because it is borderline obscene – “crotch goblins.” Mothers, especially stay-at-home moms, are seen as “not college/career material” and therefore 'less than' as if moms become moms because they can’t figure out any other way to contribute to society. Click To Tweet

Lie #2: Families with Children are for Racists? (Well, that escalated quickly)

Lie #3: Procreation is Not only Immoral, It’s Criminal

Environmental activists go beyond depicting kids as booger-nosed, vomit-producing, stinky-diaper factories intent on destroying their parents’ careers. They now claim that bringing children into this world might even be immoral! In an article called “Why Choosing to Have Children is an Ethical Issue,” philosophy professor Christine Overall argues, “When it comes to choosing whether to have children or not, there is a moral right and wrong to the choice…”

Stop Having Kids, an antinatalist group that promotes procreation as an immoral and unethical choice, claims, “None of the unborn wish to be born, but plenty of the living wish they were dead.” According to their mission statement, they “advocate for focusing time, energy, and resources that would have otherwise been allocated towards supporting new life into caring for and improving the lives of already existing individuals and places.” Their homepage says, “There is an unconscionable amount of needless suffering, injustice, and death in the world — with birth serving as the catalyst for it all.”

It’s sobering to recognize that children are being viewed this way by a growing segment of our population. These anti-birth views are having a major influence on the pro-life movement as well, attempting to bring a supposed nuance to what it means to be “pro-life.” They advocate that the more “pro-life” position is to abort the pre-born in favor of the already born and in favor of the mother. Even some professing Christian communities are beginning to embrace the killing of unborn babies as a moral alternative to giving birth. Rebecca Peters, a Presbyterian minister, asserts, “…there is certainly nothing Christian about forcing women to continue pregnancies against their will.” While these lies have deeply infiltrated our culture, we can be thankful we do not have to live by lies; we can know the Truth. God speaks clearly on the issues of family and children.

Newsflash: marriage and family were God’s designs from the beginning of creation. The very first instruction given to Adam and Eve was to have children (Genesis 1:27-28). In fact, genealogies make up a significant number of pages in both the Old and New Testaments, demonstrating how important the family is to God and His plan. Scripture also reveals how the God-given roles of dads, moms, and children are used to exemplify Christ and the gospel to the world.

Fathers should strive to be like Christ, leading, protecting, providing, serving, loving their wives (Ephesians 5:25-33), and diligently discipling their children with compassion (Deuteronomy 11:18-21 and Ephesians 6:4). Mothers, likewise, are called to love, serve, and respect their husbands, taking care of their homes, and faithfully instructing their children in the faith (Titus 2:4-5 and Proverbs 31:26-27). Children are to obey and honor their parents (Ephesians 6:1-3, Deuteronomy 5:16).

Truth #2: God Has Plans for Children (both Born and Unborn)

Despite much debate in our society about when life begins, the Bible teaches that God cares about babies even before they are born. The stories of many biblical heroes began at the earliest stages of life. God doesn’t just express His plans for children who are born (Jacob, Samuel, David), but also children in utero (Psalm 139:16), and sometimes even before conception, like Isaac, Samson, John the Baptist, and Jesus (Jeremiah 1:5, Isaiah 44:28)! Faith hall-of-famers — Esther, David, Daniel, Shadrach, Meshach, and Abednego — were young people “born for such a time” (Esther 4:14). God foreknows the events surrounding our lives and uses obedient followers, no matter how young, to further His plan and bring the message of salvation and redemption for all people.

Truth #3: Children Make Everything “Extra” – in a Good Way

If we return to the story of Adam and Eve, we learn that children are a direct gift from the LORD (Genesis 4:1). Many people don’t understand the unexplainable joy that children can bring. Experiences we might take for granted — like fuzzy caterpillars, puppies, and ice cream cones — are magnified when seen through the eyes of a child. These continue to multiply as children grow up and produce grandchildren and even great-grandchildren! Did you know that the Bible describes children as an inheritance from the Lord (Psalm 127:3)? Parents get to enjoy this amazing blessing from the Lord not only here on this earth but for all eternity if their children walk with God.

So take heart Mama Bears! Wise King Solomon said that having many children brings much happiness (Psalm 127:5). Let’s learn to recognize and reject these secular views and seek to restore a biblical perspective on children. They are a treasure worth investing in — whether they are biological, foster, adopted, or spiritual.