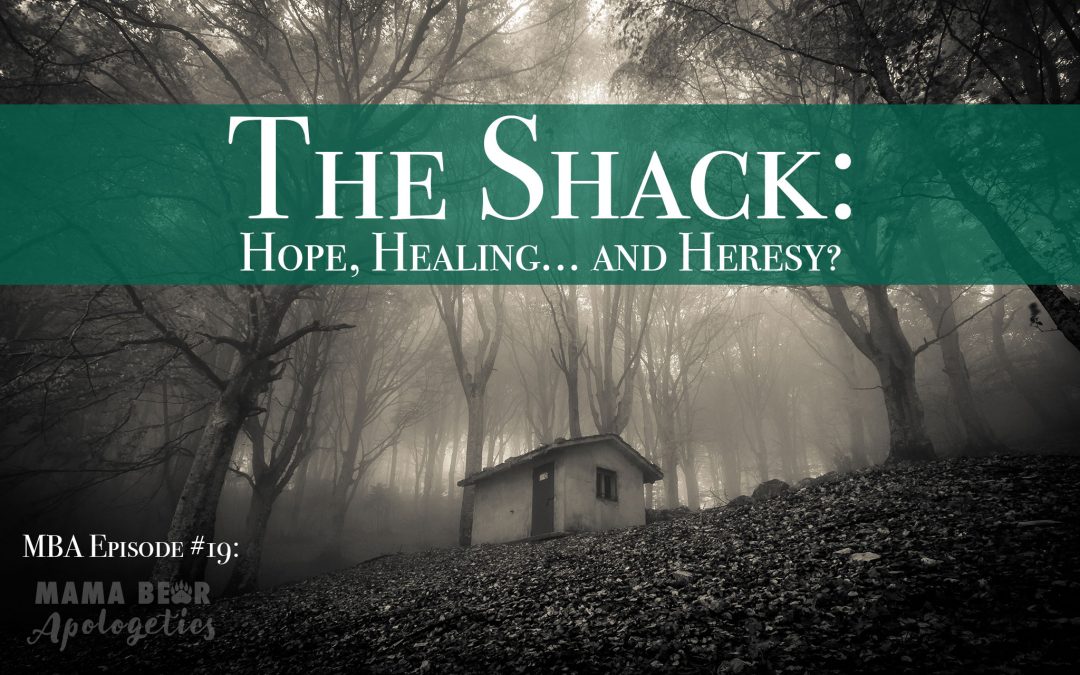 The book The Shack first began making waves in 2007, and here we are 10 years later, still a church divided. Some people love The Shack, others practically want to have The Shack burning parties. Very rarely has someone read it and remained neutral. As with most things in pop culture, the truth is somewhere in between. According to the Christian faith, there is only one inspired book in the history of the world, and even it has generated millennia of controversy. Why would we expect anything less from a book written by mere man? The Shack first began making waves in 2007, and 10 years later, we're still a church divided. Click To Tweet

For anyone who has been living under a rock (*no judgments here. I hear rocks are lovely this time of year…), The Shack is written by William P. Young and features the main character, Mack, who has recently lost his little girl to a gruesome murder. Unable to cope with the guilt and pain, Mack retreats from his wife and other two children and becomes a shell of a man. One day, he receives a letter in his mailbox inviting him to return to the place of his greatest pain — the shack where the murder of his daughter took place. However, this letter is signed “Papa,” which is the name his wife uses for God.

Convinced this is a cruel joke, Mack decides to take the author of the letter up on their offer and journeys out alone. After arriving at the shack, he meets 3 characters who are intended to symbolize the Trinity — God the Father, God the Son, and God the Holy Spirit. In this place, Mack encounters the love of God like he has never known, and also begins the process of sorting through his pain, his anger at God, and his anger at others who have hurt him.

On the surface, this book has incredibly healing and hopeful characteristics. There are many for whom the love of God is an abstract concept. For those who have been raised in a legalistic home, or who have been more acquainted with God’s wrath than His love, this book offers comfort and healing. However, used as a tool to understand theology, this book can have a number of negative ramifications.

In this podcast, we discuss aspects of both The Shack the book, and The Shack the movie. For anyone acquainted with previous Mama Bear Apologetics podcasts, we employ our favorite tactic, lovingly referred to as the “chew and spit” method. True discernment should not leave us with our fingers pointed in the air, identifying each and every misstep by an author. Rather, discernment is a process where we glean that which is good, profitable, and nourishing (i.e., that which is in agreement with scripture) while rejecting (spitting) the gristle of worldly philosophy that inevitably makes its way into any man-made endeavor. Part of being “in the world, not of the world” means that we rightly divide the good from the bad. We don’t reject everything that is imperfect, but neither do we blindly close our eyes and swallow anything put in front of us. True discernment should not leave us merely pointing out everything wrong. Embrace the good. Reject the bad. Click To Tweet

Moms with picky eaters know exactly what this process looks like. You put a plate of food in front of your child, and they go through piece-by-piece to make sure that you have not secretly slipped some peas into their mac and cheese. Why would we do any less when evaluating what goes into our minds? It is our hope that this podcast proves useful for understanding the controversy behind The Shack. For those who loved it, we want to affirm the good that is contains. For those who are concerned, we want to rightly acknowledge the areas where the author has overstepped creative license and has instead begun to teach bad theology. For those who loved it, we encourage grace and patience on those who are trying to preserve our precious Gospel. For those who think that Young is the anti-Christ sent to deceive the masses, we encourage to look at the good that can be gleaned from the book, as well as caution you against knee-jerk reactions, for a very specific reason: we have found that those who love the book often have a history of legalism, abuse, or anger at God. Please do not add to their experience by shaming them for loving the book. You don’t have to turn a blind-eye to the bad theology. Just exercise caution, wisdom, grace, truth, and love with your words. We are all in this together.