MBA Episode 51: We Will Not Be Divided: Grieving with Those Who Grieve, and the Necessary Process of Building Kingdom Community 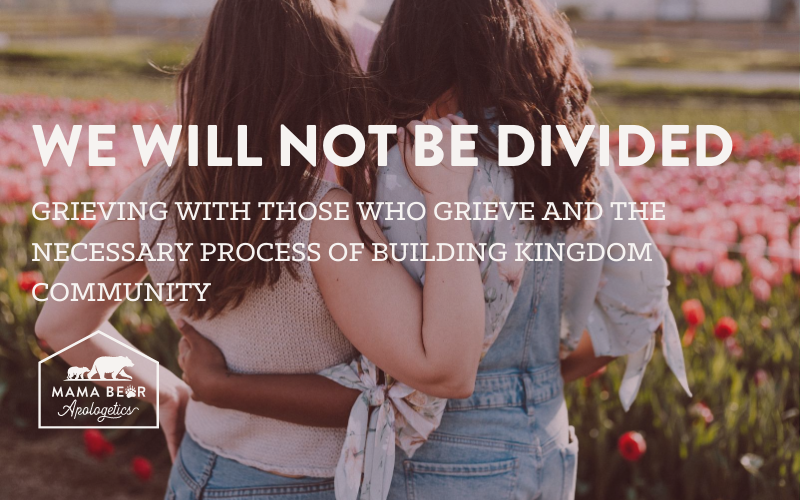 I (Hillary) titled this podcast/blog about a thousand times because I couldn’t quite figure out how to summarize our main message. The messy art of kingdom community? No. I hate the word messy. It’s so misused. (But this topic is legit “messy” if there ever were one.) Grieving with those who grieve? Yes, but that’s only part of it. “An invitation to discuss racial tensions?” Too sterile.

In the end, I took a walk and prayed, and the name came to me. It’s a phrase that has been with me for years. My friend, Melissa Pellew, even has a Facebook group with this title.

We will not be divided.

THAT is what I want to communicate. At every turn, I see the enemy trying to divide us. Fueling the miscommunication, the ignorance, the reactions, fueling the fear. But no.

We will not be divided.At every turn, I see the enemy trying to divide us. Fueling the miscommunication, the ignorance, the reactions, fueling the fear. But no. #WeWillNotBeDivided Click To Tweet

We are the body of Christ. And Scripture is clear that kingdom community will look like “every tongue, tribe, and nation” (Revelation 7:9). I can hardly wait for the day where we will revel in our differences without the fear of sin, without the fear of offense, without preconceptions, unperceived assumptions, discomfort, or unfamiliarity. What will that look like? I’m not totally sure, but I know for dang sure it will not look like our world right now.

Mama bears, these are scary times. First COVID-19, now this. And let me be clear: these racial tensions are not a new phenomenon. They are just being recorded now. And for that, I’m thankful. Thankful that we do not have the luxury of looking away.

This podcast is not an open-and-shut case of how to deal with racial tensions. Amy and I are not mom-splaining how to do it all right. It is an invitation to conversation. It is an invitation to become more like the kingdom of God. It’s the beginning of an ongoing conversation, and we invite your feedback. From all our mama bears. Our white mama bears, our mama bears of color, black, Latino, Asian. ALL of us need to engage. But what will that look like?

2. Be willing to be offended… and to offend

These conversations need to happen, and in our “cancel culture,” if a person says the wrong thing, we write them off. But let’s be honest — we are going to both offend and be offended. That’s a fact. And being willing to accidentally offend or be offended is how community is built. Just sweeping the conversation under the rug is not an option. If we are so afraid of offending or being offended, we will be right back where we are, right now.

So, this is an open invitation for all voices. Will misspeak in this podcast? It’s possible. Let us know. We are trying, and we are willing to accidentally offend if it means our community surrounds us and corrects us. Because that is how community is built.

This is an invitation for conversation within the mama bear community, to band around something that transcends race and politics: our shared identity in Christ. Our collective identity as mama (and papa!) bears raising our kids to be Christ-followers. As long as our differences are more important than our similarities, community is impossible. But building kingdom community means that we will misspeak, miscommunicate, misconstrue, and misunderstand. If we fear these more than we long for communication, then we have already lost the fight.Until we are willing to both offend and be offended, we will never have real communication, which means we can never have real community. #WeWillNotBeDivided Click To Tweet

3. Whatever your knee-jerk reaction is, investigate the opposite

I’ll be frank: I’ve been frustrated with some people’s reactions saying “wait until all the facts are in.” It’s lazy. Should we draw conclusions without all the facts? No. But neither should we ignore the facts that are available now, waiting for a narrative that confirms our suspicions, whatever our suspicions may be.

Is your knee-jerk reaction to stay out of the fray? Maybe this is an invitation to enter the pain of others, even if you lose a few nights sleep. Is your reaction to have all the answers? We invite you to listen to other voices first. Is your first reaction to assume that every one of another race is full of hatred? We grieve if that has been your experience, but lovingly ask for you to not let those experiences define all future experiences.

We all have confirmation bias going on. Let’s just own it and choose to do better, on purpose, and in community.

This podcast will cover some of the events that led to the recent riots we’ve seen not only in the United States but throughout the Western world. We will discuss the importance of having difficult conversations for the sake of community, and ideas for how to start addressing our own hearts before we judge the hearts of others. But most importantly, it’s a call for kingdom community, and that means messy conversations where we’re not afraid to say the wrong thing, and we won’t immediately shut someone down if it looks like they are trying to say the right thing, but mess up. Anyone who has been married knows that that’s basically the first 10 years of marriage: saying or doing something stupid and forgiving your spouse for saying or doing something stupid. The only option for lasting relationship is working through those awkward moments. So, we invite you into awkward moments. Why? Because the enemy is trying to divide us right now. Are we addressing our own hearts before we judge the hearts of others? #WeWillNotBeDivided Click To Tweet

**Normally we give brief notes for the website and more detailed notes for our patrons, but for this episode, we’ll going to give err’body err’thing. If you like the detailed notes for future podcasts, sign up on our Patreon page, and you’ll get all the goodies ery’time.

Also, as a follow up to this podcast, we are partnering with The Center for Biblical Unity and the All the Things show to bring you a discussion of critical race theory, and how to address these topics with our kids. Live conference is $20, and all proceeds go to the Center for Biblical Unity. Come early and mingle with other mama bears (including Hillary Morgan Ferrer!) There will be a live Q and A at the end. To register, click here.

SHOW NOTES for MBA Episode 51: WE WILL NOT BE DIVIDED: Grieving with those who grieve, and the necessary process of building kingdom community

“In a world gone mad…” It seems like we’re in a movie, but mama bears, this is real. It’s heartbreaking, and it’s raw. This is not something that Christians can avoid. We need to be able to talk about these issues. We live in community with one another, and we need to respect one another. Our hope here is to get the conversation started. We find what we have in common, and we are all united in Christ. We are all trying to live the gospel.

(8:15) A brief overview of why we’re having this conversation:

We’re going to be covering this more in the incoming weeks, but we want to allow time to hear from our mama bears, of all races. Let’s start a conversation to start building bridges.

Although we want everyone to participate in this conversation, we want this to be a respectful dialogue. We reserve the right to delete comments that are not helpful or simply attacks.