MBA Episode 48: Doubting Dawkins – No, the Human Eye Isn’t an Example of Bad Design (a Discussion on Design Constraints) 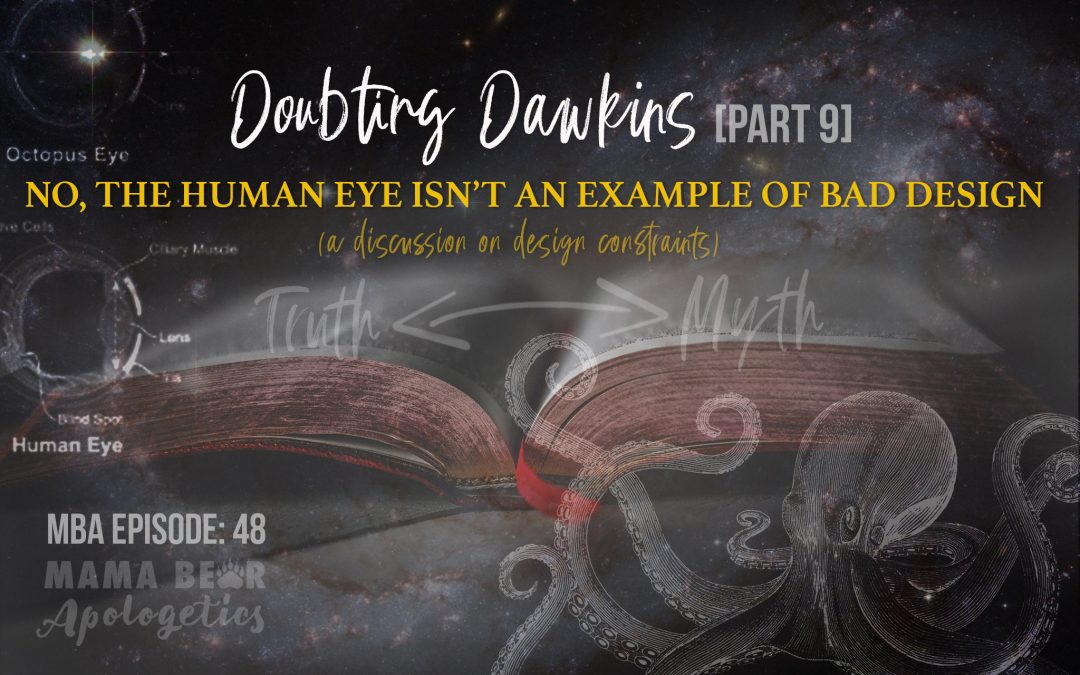 In this episode of the Mama Bear Apologetics podcast, we’re continuing our dissection of Richard Dawkins’ book, Outgrowing God, in our Doubting Dawkins series. Today, Hillary and Amy discuss chapters 7 and 8, which were the easiest to go through of all of the chapters for us. In Hillary’s opinion, this is where the book begins to shine. There are lots of links, photos, and videos that kids and parents, alike, will find fascinating.

Since Hillary comes from a biology background, she loves reading about how things work. He’s presenting evidence. Within these chapters, it’s clear that Dawkins becomes a stronger writer when he discusses animals in general, as opposed to his passages that speak about topics at a more molecular level. His specialty is, after all, zoology (specifically ethology, the study of animal behavior). When comparing these two chapters with others in the rest of the book, it becomes painfully clear that very little of what he writes is in line with his academic specialty.

We hope you learn a little more about how to sift through ideas, accept the good, reject the bad, and now you can teach your kids to do the same.

Design constraints exist. That doesn’t mean that there is a design flaw. Click To Tweet Don’t be afraid of science. What we need is more science, better science. The more details the better! Click To Tweet God cannot be the same nature as His creation because material things cannot bring themselves into existence and are ultimately dependent upon something else. Click To Tweet

Richard Dawkins, Outgrowing God. The text that we have been discussing can be found on Amazon.

Jerry Bergman, Inverted Human Eye a Poor Design? Article about the design of the human eye. Is it a poor design?

Jerry Bergman and Joseph Calkins, Is the Backwards Human Retina Evidence of Poor Design? We referenced this while we were talking about the design of the human eye.

Helga Kolb, “How the Retina Works” This article was published in a 2003 edition of American Scientist about intelligent design and the biology behind the retina.

Wolf-Ekkehard Lönnig, “The Laryngeal Nerve of the Giraffe.. Does it prove evolution?” This topic was discussed in chapter seven of Dawkins’s book.

Casey Luskin, The Recurrent Laryngeal Nerve Does Not Refute Intelligent Design, an article from the Idea Center to help you understand more about the laryngeal nerve.

Insane in the Chromatophores, YouTube video. This was suggested by Dawkins as an interesting and entertaining example of how chromatophores in cephalopods work.