MBA Episode 42: The Unfortunate (and Painful) Lessons We Learned From #WakeUpOlive 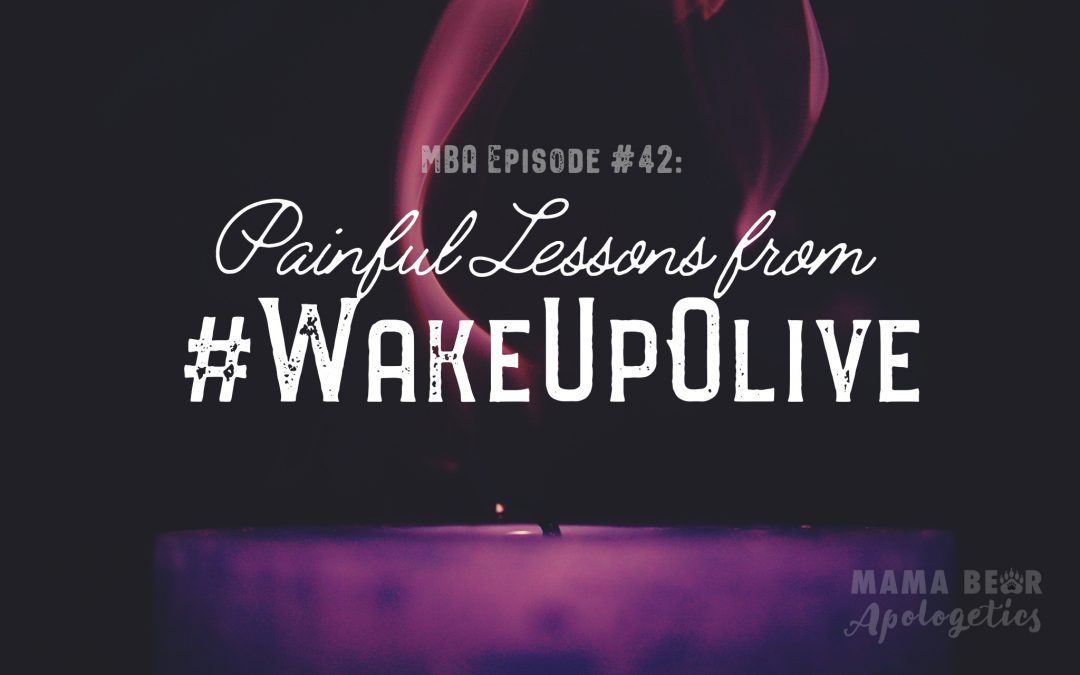 Before we start diving back into the Richard Dawkins book, Amy and I felt it necessary to address a heartbreaking, but concerning cultural issue that cropped up over the holidays. On December 14, 2019, Bethel worship leaders Kalley and Andrew Heiligenthal’s two-year-old daughter stopped breathing in her sleep and was pronounced dead by doctors at a nearby hospital. This is undoubtedly every parent’s worst nightmare. I cannot begin to imagine the kind of grief that this family experienced, and especially right before the holidays.

We at Mama Bear Apologetics want to stand beside a family that mourns and mourn with them. Period.

That being said, when a family’s private grief turns into a worldwide movement that misrepresents Scripture, we must both mourn and speak a gentle word of correction – not to the family, but to those following the story. Apologetics is about giving reasons for faith, and when there is a worldwide hashtag that has the potential to change who or what people are putting their faith in, then we must say something. Unfortunately, this is what happened. Mourn with those who mourn, but not at the expense of the faith of immature and young believers, and not at the expense of our witness to the world. #apologetics Click To Tweet

Within hours, the family had called upon the worldwide church to pray for the resurrection of their daughter with the hashtag #wakeupolive. I don’t blame them in the slightest. If I were a parent, I would do everything I could to pray for a miracle. However, there were several concerning messages that surrounded this global call for prayer which we discuss in this podcast. Here are three of the biggies.

1. God’s miracles are dependent on the strength of our feelings of faith (which is proved by how loudly we proclaim what God is about to do)

The main message that was being circulated was asking for people to believe that God would raise this child from the dead. We should absolutely pray with hopeful expectation, but some feeling of “belief” is not the barometer that God is looking for. Otherwise, the miracle becomes a work of ourselves. We are asked for the faith of a mustard seed – the smallest seed known at the time. Jesus healed people who didn’t know who He was, and sometimes who didn’t even ask for healing (John 5).

Why is this concerning: When people think that it is their level of faith that will determine whether a miracle is performed, then there is nothing but self-condemnation left if the Lord chooses to not answer the person’s prayer the way they hoped. This is also leaving us with faith in faith instead of faith in Christ. It’s a weird kind of idolatry, but idolatry nonetheless. If your 'amount of faith' is what unlocks God's faithfulness to do what you ask, then there's nothing left but self-condemnation if He doesn't do what you ask. It's also faith in faith, and not faith in Christ. Click To Tweet

2. We can declare God’s will

This was honestly one of the most concerning aspects that we noticed over and over. People not only declared what God was going to do but declared that it was His name and His goodness that were on the line. Yes, lots of Moses and Joshua quotes were cited. And those quotes definitely applied to Abraham, Moses, and Joshua, for whom the Lord did declare that His goodness was contingent upon bringing the people of Israel successfully out of slavery in Egypt and into the promised land. But we can’t analogize the “promised land” to any request that we make “in faith.”

Why is this concerning: If God’s name and goodness are dependent on Him acting in a particular way, what happens to His name and goodness if He chooses not to act according to our wishes? We have now brought His goodness and faithfulness into question before the world. While this should go without saying, I’ll say it anyway: be careful what you declare to be a “promise” of God, especially in front of new believers or non-believers. If you call something a “promise,” or declare that God already told you that He was going to do something, you better be right because you are essentially making Him out to be a liar (to the peanut gallery) if you spoke too hastily. Christ promised us eternal life for those who believed, trials and tribulations in the meantime, and His continued presence in the midst of said trials as we persevere. Beyond that, I think we should be very cautious to declare something a promise. The ramifications on a new Christian’s faith cannot be overstated.

3. Being unsure that God will is akin to saying that He can’t.

This was the most common accusation I heard lobbed at people who didn’t want to jump on the “In God’s name, we declare Olive resurrected” bandwagon. Anyone who tried to interject a sense of God’s sovereignty was shot down as having a small view of God or denying that God was capable of doing such an act.

Why is this concerning: Again, I saw many people express confusion on social media about wondering if they were bad Christians for not being 100% sure that God was going to resurrect this sweet child. (Even a Christian in a Christian group I am involved with accused me of this.) Is God able to heal or resurrect? Absolutely. Does He always choose to? Absolutely not. Saying that He may not is not the same as saying that He can’t. (See Daniel 3:17-18.)

All in all, we are to mourn with those who mourn, but we are not to do so at the expense of the faith of immature Christians or at the expense of our witness to those who still do not know Christ. While this is a very sensitive topic, I hope that Amy and I adequately addressed the issues with both grace and truth. As #apologists, we are trying to remove barriers to faith. If we see something that could wreck someone’s faith unnecessarily, then we have to speak out against that. But always with gentleness and love. Click To Tweet