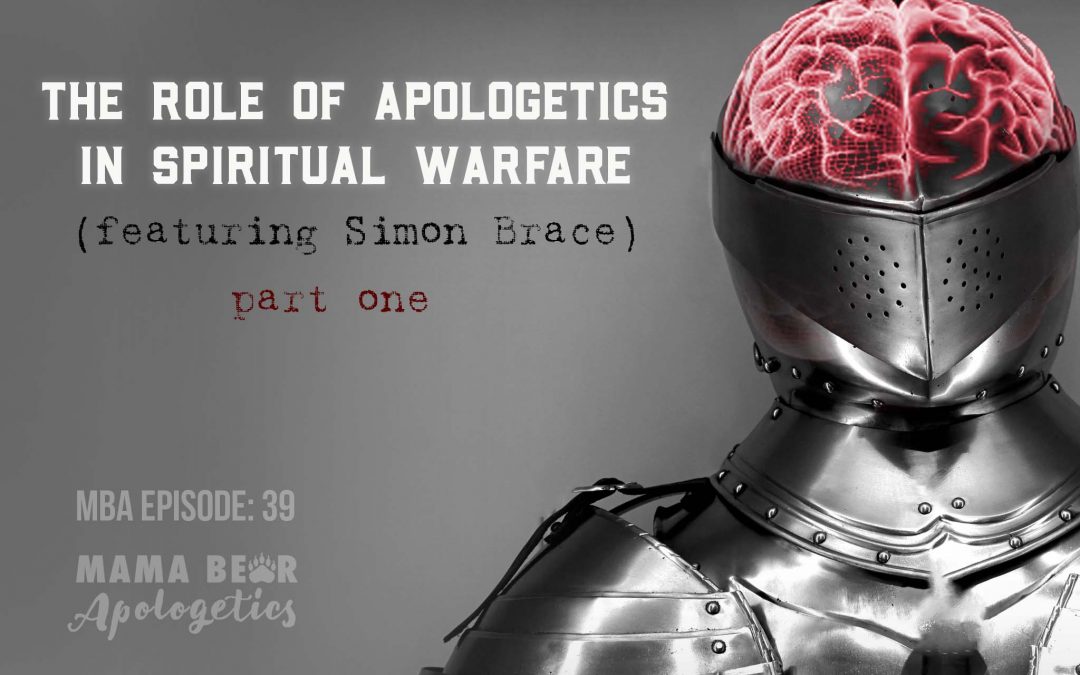 On today’s episode of Mama Bear Apologetics, we’ll be discussing a talk by Simon Brace. When I sat down at my computer to think about topics for today’s podcast, I was struck with the urge to discuss a talk (which I was present for) by a close friend. In this talk, Simon Brace tackles the use of apologetics as a means for spiritual warfare.

People are so focused on these secondary issues that when it comes time to focus our efforts on the more pertinent issues, everyone is tired and there is silence.

Ephesians 6:12 – the verse that Simon references in this talk.

The Final Quest by Rick Joyner

The Charismatic Movement – “The charismatic movement is the international trend of historically mainstream Christian congregations adopting beliefs and practices similar to Pentecostalism. Fundamental to the movement is the use of spiritual gifts (charismata). Among mainline Protestants, the movement began around 1960. Among Roman Catholics, it originated around 1967.” (Wikipedia)

If Christians do not understand the nature of war, then how is it going to be likely that we are going to know how to fight? Click To Tweet

The false assumption is that if we have the military garb about which Ephesians speaks, then we will know what to do with the sword and the shield and all of the other items when Satan and his cohorts show up. Click To Tweet

Christian warfare is not a form of terrorism. It is a form of counter-terrorism. Click To Tweet

It is critical that we know the nature of the fight we are getting ourselves into. Click To Tweet

No doubt (Satan and his fallen angels) exercise tremendous influence over men even if men do not think that. Click To Tweet

When is the last time you heard a sermon on spiritual warfare and Satan and his demons? Click To Tweet

We are fighting a spiritual battle against actual demons that are out there for our destruction. Click To Tweet

Diagnosing an illness does not remedy a situation. It is what happens after the diagnosis that matters. Click To Tweet

I am convinced that some aspects of this cosmic battle serve as smokescreen to hide work that Satan would rather not have us concern ourselves with. Click To Tweet

In my estimation the evangelical church is often reigning down bombs on cardboard tents. We think that we are engaging the enemy when, for the most part, we are attending to a distraction. Click To Tweet