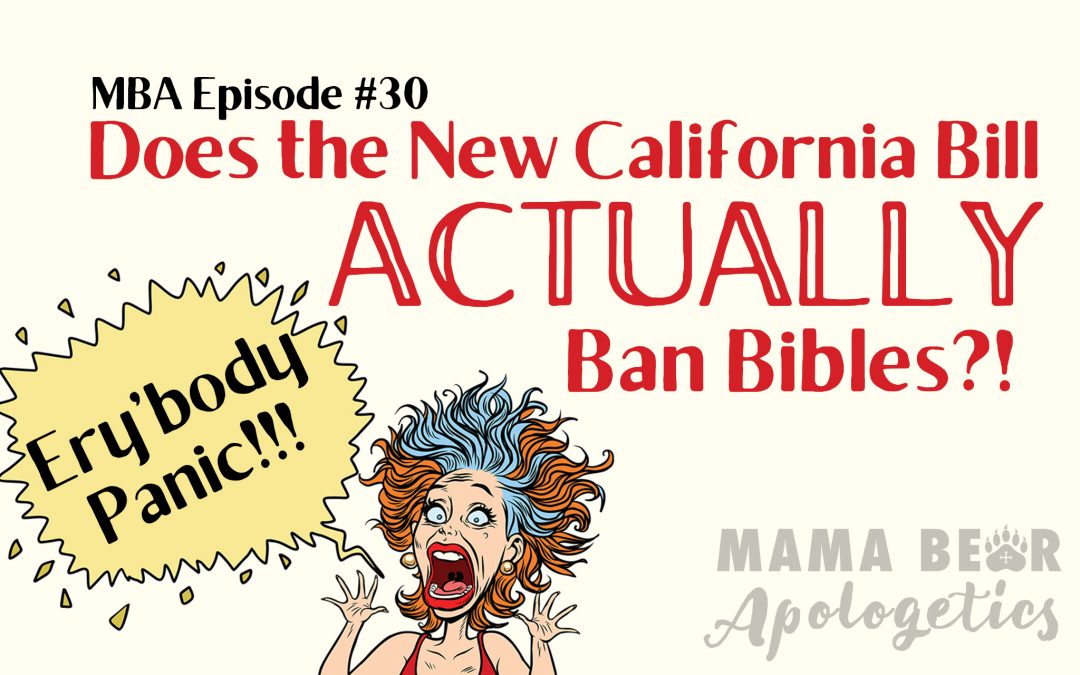 If your newsfeed is anything like mine, you might have seen a few posts last week asking if the new California Bill 2943 will “ban the Bible.” Folks, let’s not jump onto bandwagons before we have properly checked them out. I’m not denying that the bill itself is deeply concerning. In fact, if enforced as written, it could potentially ban the sale of Bibles. (i.e. You could give Bibles away, but you couldn’t sell them.) But let’s bring the discussion back to what this bill is actually about, which is what is known as “gay conversion therapy.”

As of right now, it is illegal in California for counselors (or anybody I think) to provide counseling for persons under the age of 18 which would attempt to change their sexual orientation. I’ll be first to admit that I’ve heard horrific stories of things that have passed for “counseling.” Yet, I say this with a grain of salt because although I’ve “heard stories,” I’ve never met a person who claimed first-hand knowledge of anything like what I’ve seen in the movies. (i.e. Clockwork Orange kind of stuff.)

What I do have first-person knowledge of is ministries like Living Hope in Arlington, Tx. Ministries like Living Hope are geared towards people who are experiencing unwanted same-sex attraction (SSA for short.) I know at least four individuals who have gone through Living Hope’s program and have said nothing but amazing things. I was also friends with the former female intake counselor when John and I lived in Dallas, and I heard the message that they give to every person who comes through their doors. Living Hope doesn’t operate on a “pray the gay away” model. Yes, they are trained in Biblical counseling, but they are not so naive as to think that homosexuality is a “disease” that can be cured or a life desire that an individual chose. Rather, they seek to understand a person’s history to find out where legitimate needs went unmet, and help the individual go back through developmental milestones they may have missed which potentially affected their sexuality.

1) The bill reads more like a commentary than a legal document.

So, we aren’t just talking about people being counseled against their will into sexual orientation change efforts (SOCE). (I agree that that can be counterproductive.) According to this bill,  “Advertising, offering to engage in, or engaging in sexual orientation change efforts with an individual” is off-limits for all counselors.1Section 3, section 1770 of the Civil Code, line 28 This means that even if the patient asks for SOCE, the counselor is prohibited; doing so would constitute “fraudulent business practices under state consumer protection laws.” Technically, the bill only restricts these kinds of counseling services that are “commercial” and involve a “transaction,” meaning money is exchanged in some way. So technically, a person could offer this kind of therapy; they just couldn’t charge for it. And the person cannot be a professional mental health counselor. If they are, then they would be subject to “discipline by the provider’s licensing entity.”2LEGISLATIVE COUNSEL’S DIGEST This is all under the assumption that “science” (in the form of the American Academy of Child and Adolescent Psychiatry) has reported that “Clinicians should be aware that there is no evidence that sexual orientation can be altered through therapy, and that attempts to do so may be harmful.” (emphasis mine.)

So I agree and disagree with this statement. I agree that “therapy” probably cannot change someone’s sexual orientation. A person who struggles with same-sex attraction will probably always struggle with it to some extent. But I disagree that there is “no evidence,” namely because I could give them 7 names off the top of my head right now of people who I personally know who have had a real encounter with Christ, submitted their lives to Him, and have (over time) overcome their unwanted same-sex attraction and are living joyful lives, walking with the Lord. There is no amount of “therapy” that can do this. The sanctifying work of the Holy Spirit can, though. I’ve seen it happen. It wasn’t a quick road and it wasn’t a single prayer. So, claiming that there is “no evidence” is itself deceptive. There’s only “no evidence” if you ignore all contradicting evidence.

In short, this bill reduces the options for people with unwanted SSA. As a guy on facebook said to me in an online conversation, “If someone wants that kind of counseling, they can just go to another state.” Sure. That’s not disruptive to someone with a day-job.

3) This bill would prevent the sale of any goods (including books) that “engage in sexual orientation change efforts.”

So yes, this does include the Bible. As I mention in the podcast, the first verse that comes to mind is 1 Corinthians 6:9-11. In this verse, Paul states a whole list of things that “some of you once were.” This and other verses seem to imply that there is a form of changing one’s sexuality–if not in orientation, at least in behavior– that is advocated by the Bible. The language in California bill 2943 does restrict the “transaction” of a “good or service” that makes such a claim. To be clear, while I don’t expect for them to enforce this aspect immediately, do be aware that the language allows for it. To get around it, you can technically give someone a book (like the Bible) which has such hateful statements in it. You just can’t sell the book.

So, the quick answer is “No, the bill does not ban the Bible.” I would encourage you to listen to the full podcast above to hear our full review of what it does say.