MBA 25: How Educated Do You Have to Be to Identify Nonsense? 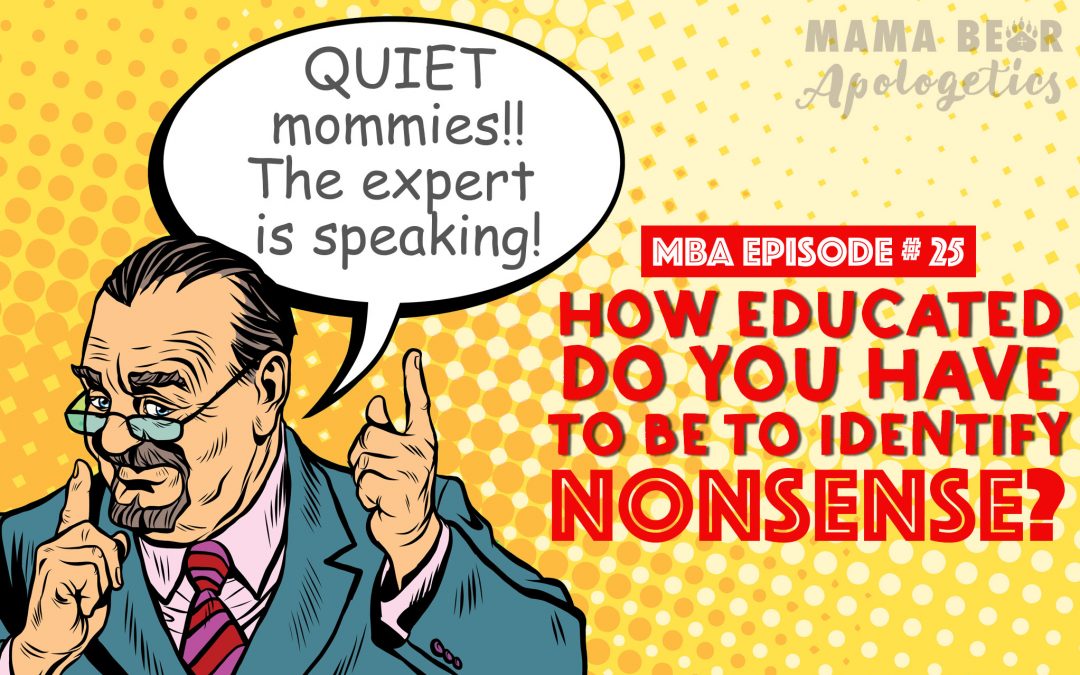 There is an interesting phenomenon which the late Herman Kahn described, where “those with engineering or sociology training [are unable to] understand certain issues which they would have been able to understand if they had not had this training.” Kahn called it “educated incapacity,” but the idea was originally taken from economist Thorstein Veblen, who dubbed it “trained incapacity.” Whatever you want to call it, our world is full of it.

While I am thankful that we have such amazing access to education, there is a downside; our world is becoming obsessed with credentials, to the point that they are hesitant to call out nonsense if it is spoken by someone more educated than they. Only a person with a PhD in Fashion Design may claim that the emperor has no clothes. Everyone else must bow to the consensus, or be silent.

Do I value education? You bet. Do I think that the trained opinion of an astrophysicist carries more weight than my thoughts when discussing astrophysics? Sure do. However, if a person is “not an expert” on a topic, does that mean that they cannot have an educated opinion? No. No, it does not. (But if you ever disagree with an “expert,” you can be sure that someone will use this tactic on you.)Must you have a PhD in Fashion Design to claim that the emperor has no clothes? Click To Tweet

There are certain things in life that we do not need a PhD to understand. The basic laws of logic are an example. Furthermore, experts do not always agree on everything! Two people can cite two equally credentialed experts, and come to two wildly different conclusions. And experts have a funny habit of speaking outside of their expertise, and expecting the same level of deference.

As J. Warner Wallace points out in Cold Case Christianity, juries are not composed of experts. They are comprised of average people, peers to the defendant. Our judicial system recognizes that we as humans are endowed with the innate mental capacity to listen to expert opinions, and come to correct conclusions. The conclusion of the jury can be a matter of life and death! And yet a group of everyday citizens is entrusted with the sacred duty of determining the truth of a situation.

The Mama Bears recently engaged a twitter troll who questioned our ability to understand science. He likely took one look at the word “Mama,” rolled his eyes, and then arrogantly made assumptions. To his attitude, we have to ask, “Exactly how educated must a person be to identify nonsense?” We think a command of the English language and a healthy dose of common sense and critical thinking skills should suffice in many situations.

But in case you’ve ever been made to think that that is not enough, this podcast is for you! There is no PhD in common sense, nor do you need one to have it. Click To Tweet

John Lennox – brilliant Oxford Mathematician who is also a Christian, and also gifted with an extra helping of common sense. He displays exceptionally low levels of educated incapacity when it comes to philosophy.

Stephen Hawking – (also brilliant) theoretical physicist who is known for saying that “Philosophy is dead.” With dead philosophy, he comes to the scientific and mathematic conclusion that something can come from nothing, but then defines nothing as gravity.

William Lane Craig (Link to his Reasonable Faith Website) – Biola professor, and feared among most atheist debaters. He is considered one of the most influential living philosophers in the world.

Clay Jones book: “Why Does God Allow Evil?” – Probably the most compelling theodicy I’ve ever encountered for why God has allowed evil in the world.

Ken Samples, Biola Professor and fellow at Reasons to Believe

The Illustrated Book of Bad Arguments – A whimsical picture book outlining the major logical fallacies. (Note, that this is not written from a Christian perspective. But it is still lots of fun!)

Playground Apologetics – Awesome Mama Bear blog series by Hillary Short, with tips on how to engage in apologetics conversations with other moms.

Undesigned Coincidences by Lydia McGrew – Book by Lydia McGrew which argues for evidence of the reliability of New Testament documents via corroborative details included in the various gospels that were unlikely planned.

The Game Plan for Misconceptions:

Cogito ergo sum – Latin for “I think, therefore I am.”  Originates from Descartes’ “tabula rasa,” or blank slate, thought experiment in which he threw out everything he believed he knew in an effort to identify the truths of which he could be absolutely certain.

Necessary – As in “necessary being.”  Philosophical term meaning it must exist; it is uncaused and impossible for it not to exist.

Affinity – The pull involved in gravity.

Quantum vacuum – What many naturalist, atheistic physicists believe the universe was created in.  The problem for the theist is that it’s something, not nothing, and therefore requires explanation of existence as well.

Theodicy – One’s set of explanations for why God allows physical and moral evil.

Ad Hominem fallacy – A logical fallacy (or breaking of formal logical rules) in which there is a critique of the person stating an idea, not the idea itself.

No True Scotsman fallacy – A logical fallacy that employs rhetoric but not reason to dismiss evidence by claiming a proposed expert fails to meet some unidentifiable threshold for reliability.  Example: “Oh but he’s not a real scientist, so his ideas are bunk.”

Ex nihilo – Latin for “from nothing,” used here in “creation ex nihilo,” the belief that God created the universe without pre-existing matter.

Imago Dei  – Latin for “the image of God.”  Example: “We are created in the imago dei.”

Objective Truth  – A truth that corresponds to reality, regardless of perception.  Example: “The bakery is next door to the flower shop.”

Subjective Truth ­­– A truth dependent upon the person experiencing it.  Example: “Coffee ice cream is my favorite flavor.”

The Law of Excluded Middle  – A law of logic that states that either a proposition or its negated form is true, with no halfway option  Something either is or isn’t, there’s no third option for an in-between state.  Example: “That animal in the distance is either a deer or something else.”

Extrabiblical – Outside of the Bible itself.  Extrabiblical evidence for Christianity supports the Bible’s truths from outside disciplines such as science and history.

“If you exist and you’re a human being, you do philosophy.”  –

– G.K. ChestertonIf the ordinary man may not discuss existence, why should he be asked to conduct it? Click To Tweet

“Because a law like gravity exists, the universe can and will create itself from nothing.”

“We at Mama Bear demolish arguments, not people.”