MBA 21: Is the Progressive Gospel a Gospel at All? (i.e. Why you need to know what your children’s pastor is teaching) 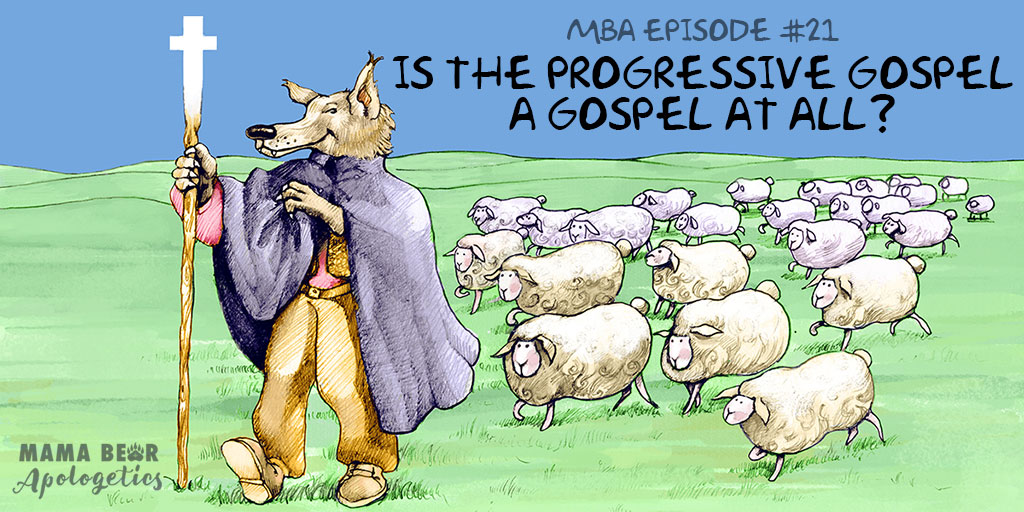 Normally, when Rebekah and I do an “article of the week,” it is because the content is so awesome that we want to share and discuss. This time… not so much. A week or so before Easter, a highly disturbing article written by a woman professing to be a children’s pastor at a “progressive Christian church” started making the rounds on Facebook. (See original article here.) The article was a chilling reminder that not all who claim to be Christians preach the Gospel as described in scripture. In fact, this article was the antithesis of the Gospel, and this distorted gospel is being preached in the name of “protecting children,” as if Christ’s death and resurrection is too much for them to handle. Beware a gospel that is radically different from the one found in scripture. Click To Tweet

Mama Bears, articles like these are the reason Mama Bear Apologetics exists. The ideas presented in this article are exactly the kinds of ideas we are called to demolish. (And sometimes, they don’t go down without a fight, as you can see from our blog here.)  It is my hope that we accomplished this goal of demolishing ideas in the podcast, while not demolishing the person. The woman who wrote the article it is still an image bearer of our God, and both she and we will have to give an account to the Lord one day for every word spoken, and especially every word spoken as a teacher. She answers to God alone for the way she has used her leadership, not to us. However, that doesn’t mean we sit idly by and let ideas like these remain unchallenged.

We are called to “test all, and hold on to what is good.” (1 Thessalonians 5:21) Thus, Rebekah and I take each statement and compare it to what scripture says. If you start feeling uncomfortable (or even angry) listening to this podcast, GOOD! We should rightly feel angry when we hear the Gospel of our God being distorted in such a horrific way. We should be even more angry that these lies are being taught to children. However, in our anger, may we not sin. (Ephesians 4:26) Rise up Mama Bears. We don’t demolish people, but we do “demolish arguments and every pretension that sets itself up against the knowledge of God, and we take captive every thought to make it obedient to Christ.” (2 Corinthians 10:5)

Article of the Week to be critiqued: The Trouble with Easter: How to (and not to) Talk to Kids About Easter

Statement: Jesus died for the sins of the whole world, not specifically for your kid:
Technically true.
Scripture evidence: John 11:49-52, 1 John 2:2

False statement: Jesus did not die for sins, but to show that “God’s presence follows us – even unto death.”
Truth: Jesus died to save us from our sins and to reconcile us to God.
Scripture Evidence: 1 Peter 3:18, 1 John 2:2, Hebrews 2:14, 1 Corinthians 15

False statement: There is nothing inherent in these children’s humanity that needs to be saved.
Truth: We were all born inherently sinful. Our inborn sin the reason Jesus came to die. If there is nothing in us from which we need to be saved, then the Cross was totally overkill.
Scripture Evidence: Psalm 51:5, Romans 3:10-18, 1 John 1:8-10, Isaiah 59:2, Psalm 14:2-3, Jeremiah 17:9

False statement: There is no resurrection of the dead, and the point of Easter is not Jesus’ literal resurrection. … “All we have is this life – let’s live it well, even unto death.”
Truth: Christ’s literal resurrection is THE most important aspect of Christianity! If Christ has not been raised, then our preaching is in vain, so is our faith, we are to be pitied as fools, and we are all dead in our sins. If Christ has not been raised, “Eat and drink, for tomorrow we die.”
Scripture Evidence: 1 Corinthians 15:14-15, 19 “If Christ has not been raised, then our preaching is futile, and so is your faith. More than that, we are then found to be false witnesses about God, for we have testified about God that he raised Christ from the dead. But he did not raise him if in fact the dead are not raised. … If only for this life we have hope in Christ, we are of all people most to be pitied.”

Statement: “The way of Jesus is the way of honesty, bravery, love, and kindness.”
Technically True, but it’s also true of most every religion. This does not distinguish Christianity from among other religions. There is no religion that values deception, cowardice, hatred, and meanness.

False statement: The purpose of the resurrection is that “New life often pops up unexpectedly.”
Truth:  We know exactly when we expect new life to pop up. Prophesies of Jesus’ resurrection and our resurrection are recorded all over the Bible, and we know to expect resurrection on the last day.
Scripture Evidence: Daniel 12:2, John 5:28-29, 1 Corinthians 15:52

False statement: Jesus’ friends were more scared when they saw him alive again.
Truth: The disciples were bolder than ever when they saw the risen Lord.
Scripture Evidence: John 20:19 à Acts 2:14

False statement: “Stories don’t have to be factual to speak truth.”
Truth:, but if the resurrection is not factual, our faith is futile.
Scriptural evidence: 2 Peter 1:16, 1 Corinthians 15,

This should be a reminder for us all: James 3:1 Not many of you should become teachers, my fellow believers, because you know that we who teach will be judged more strictly.If the resurrection is not a historical event, let's all go home. We need another religion. Click To Tweet

“Progressive should not be tacked on to the word Christian, because progressive means it was once worse, and now it’s getting better.” – Hillary Morgan Ferrer

“Sometimes they broaden the definition of harmful, to where if you feel any shame whatsoever, that’s bad. …and the only people that should feel shame are the people who inflict shame, and those are those fundamentalist Christians, and we’ll shame them, but shame is bad. It’s just incoherent.” – Rebekah Valerius

Here is the video that comes to mind when I see such nonsense coming from a woman teacher, because I KNOW that there is some guy out there reading the “How Not to Teach About Easter” article and exclaiming “See!!! This is why women aren’t supposed to teach!!”