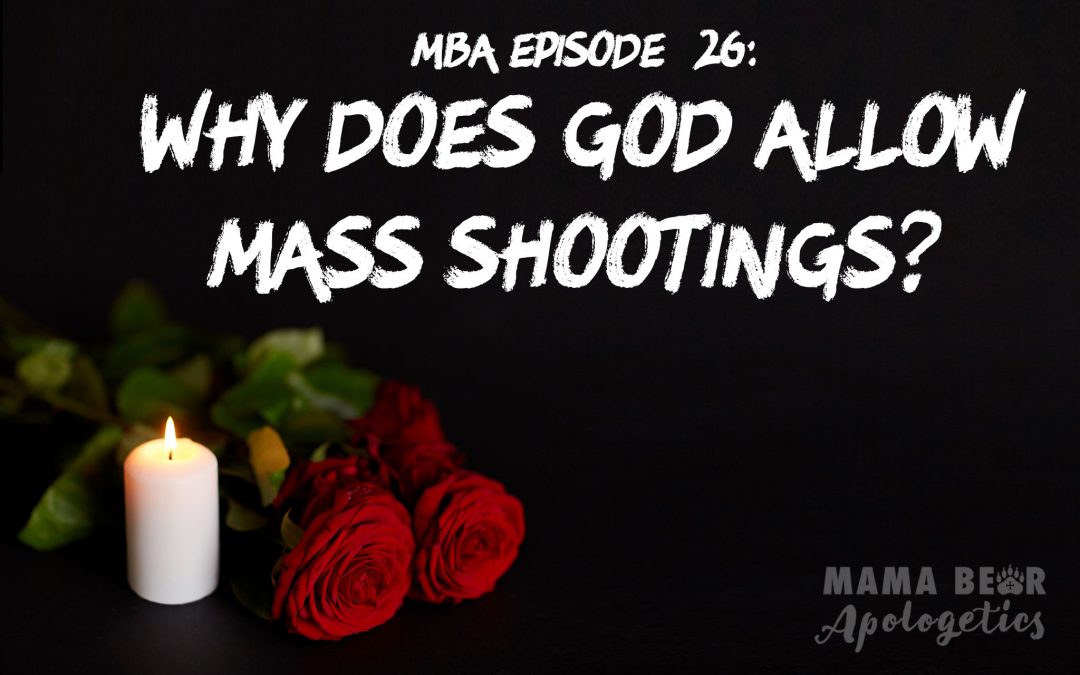 Events like the Las Vegas shooting and now the Florida school shooting inevitably bring questions to people’s minds. Where was God? How could He let such a thing happen? For those who have been affected by the shooting, there are no words we can say that can assuage the grief. There is no answer that will make the pain go away. We can stand in solidarity with you, offering up our own grief and our own suffering, and reminding you that we are all in this world together. All we can do is our part, and our hearts and our prayers have been with you since we heard the news.

This podcast is in no way intended to reach those directly affected by the shootings, because words are empty and hollow in such a time as this. However, there are a lot of you Mama Bears out there that are probably getting some questions that you don’t feel prepared to answer. Ecclesiastes 7:4 says that “The heart of the wise is in the house of mourning.” It is amazing how the mundane, first-world problems of everyday life seem to melt away in the wake of true suffering. And while we don’t hope for these moments, or wish them upon anyone, we would be unwise to not seize upon the brief window of time that we have when our kid’s eyes are towards things that matter—things of eternal significance.

In today’s podcast, we address how to talk to kids who are asking questions about evil in the world, as well as getting to the root of the questions that they aren’t asking aloud. Join us as we wade through this incredibly delicate, but important topic. Conversations of significance often start with questions that terrify us. Click To Tweet

Talking With Your Kids About God: 30 Conversations Every Christian Parent Must Have by Natasha Crain

Why Does God Allow Evil?  By Clay Jones

The Weight of Glory by C.S. Lewis

Lazarus and the Rich Man parable

How to Respond to a Child Questioning Evil in the World:

Ask your child to tell you one food that he loves, one that he hates, and one that he finds boring.

Epicurus – A 4th Century B.C. Greek philosopher who developed a philosophy of living free of pain and in search of continual pleasure.

Job – A man of great suffering in the Bible.  Job questions why God would allow his family to die and hardships to occur.

Søren Kierkegaard  – A 19th century Danish Christian Philosopher.  Mentioned here is his wondering if his family’s wealth was a hindrance to his growth and character.

C.S. Lewis A 20th century professor, writer, radio broadcaster, and champion for the Christian faith.  He is brought up here in context of free will and viewing humans as being sub-rulers given much responsibility.

“It’s when someone’s not suffering that is the best time to address suffering.”  – Hillary Morgan Ferrer

“Do we want a God whom we can tame?”  -Rebekah Valerius