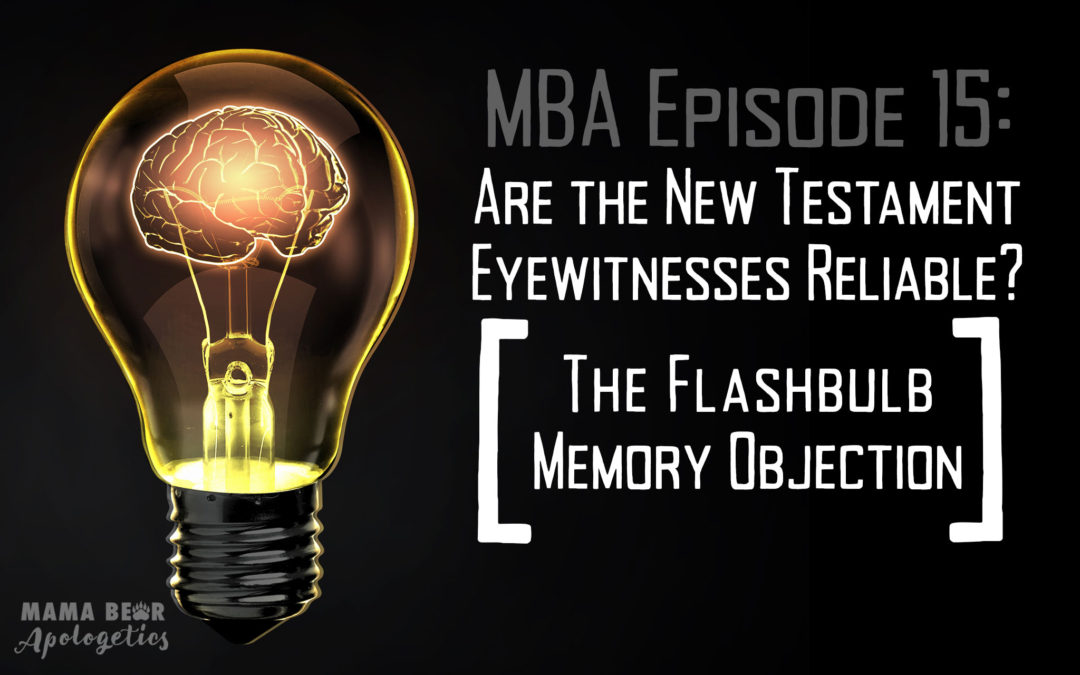 The question of eyewitness reliability is a pertinent conversation that every parent will have (or should have) when their child asks, “How do we know that we can trust the Bible?” If the New Testament documents are not reliable, and if the people writing the New Testament documents were not reliable, what leg does our faith have to stand on? If we are basing our lives and our beliefs on a historical document, that document is worth investigating and defending. 'How do we know we can trust the Bible?' is a question EVERY Christian parent will face eventually. Click To Tweet

The latest en vogue critique of New Testament reliability involves something known as “flashbulb memories.” Flashbulb memories are memories which are so surprising and so emotional that they remain etched in our minds forever. (An example would be remembering where you were and what you were doing when you learned about the Twin Towers being hit.) However, flashbulb memories may not be as credible as scientists once thought, according to an Emory University study on recollections of the Challenger explosion. This was Bart Ehrman’s main point of contention during last year’s debate with Justin Bass. However, Rebekah and I felt skeptical about many of Ehrman’s conclusions.

This is part 2 of a series we began a few weeks ago in response to the debate between Dr. Justin Bass and Dr. Bart Ehrman. (You can see part 1 here.) Please excuse the quality of the audio. There was a glitch in the microphone. In this podcast, Rebekah and I discuss the research that was presented by Ehrman at the debate, and lend some perspective on how we should address these arguments with our kids – especially in regards to experimental bias. While I cannot find the original experimental write-up, numerous articles report that essentially half of the once-believed “infallible” flashbulb memories were actually flawed. However, this should naturally leave one asking, “What is the difference between those who had accurate flashbulb memories and those who didn’t?”

Upon further investigation, Rebekah and I discover that that there are two important hallmarks of accuracy in a flashbulb memory. The first hallmark is a close relation between the individual and the event. According to this study discussed in the podcast, the more personally affected individuals were by an event, the more likely they were to remember the event accurately. The disciples were incredibly and personally impacted by the events of the New Testament. Jesus, whom they had followed for years, eaten with daily, studied under, and revered as the Son of God was suddenly arrested, put to death, and appeared to them again resurrected. Afterwards, they were ostracized from their communities, some disowned by their families, and ten of whom were brutally murdered for sticking to this story. None of the examples cited by Ehrman during the debate even remotely addressed the memory differences between people personally affected by a tragedy and those who were just bystanders, and thus his claims are cherry-picked, faulty comparisons.

The second hallmark is regular review of the details of the event. This  appears to be based on Ebbinhaus’ forgetting curve. The research we discussed showed that the amount an individual reviewed material, especially within the first 6 years, was highly correlated with their ability to retain the information. This is also pertinent to the New Testament eye-witnesses. The entire testimony of these men and women hinged on their recounting of events they had witnessed. Many of these witnessed accounts were experienced in groups, and they could rehash events together, correcting one another, reinforcing the memories, and putting them into easy-to-remember creeds to be passed down from person to person. These were not individuals, alone in a vacuum with their memories. These are corporate memories reviewed in a communal setting and within an oral culture.

We have few things in our world with which we can accurately compare this culture. We live in a world of DVRs, YouTube, Facebook, and blogs. We don’t have to remember anything more than the necessary keywords to Google it. To compare our memory in today’s culture with the highly advanced mnemonic memories of oral culture is itself problematic.

Join Rebekah and me as we dive into the question of whether or not flashbulb memory research discredits the eyewitness accounts of the New Testament writers! And if we drop a couple of 10-cent words on you, check out our “unfamiliar vocabulary” section in the notes.