Matthew West and the Modesty Debate 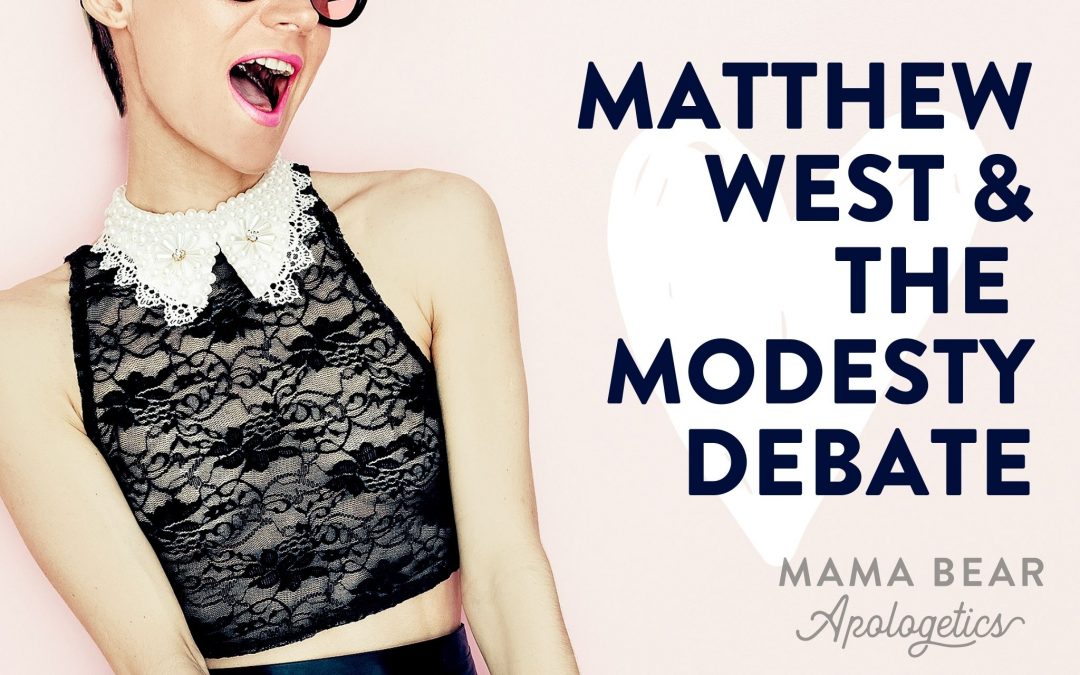 In Matthew West’s latest satire song, “Modest is Hottest,” this dad of teen girls is smacked with the realization that his babies aren’t babies anymore. How should his daughters navigate the saucy side of TikTok and the pending arrival of boys at the front door? By dressing like a librarian, of course! Or Amish. Either will do.

Between silly dances around trench coats and cringy eye rolls from his girls who were stuffed into black turtlenecks (in summer), West struggles with what most parents struggle with: how to respond to the hyper sexualization of women in pop culture and social media.

The music video was meant to be a funny jab at the panic parents feel when their kids start dating, but for many folks who experienced a perversion of purity culture,1If you haven’t read our purity culture series, you’ll find the first blog. It’s worth the read for anyone who has gone through or wants to learn more about it. here: https://mamabearapologetics.com/what-went-wrong-90s-pc/ this song hit a sour note. Twitter erupted with anxious stories from women who were raised under the false idol of virginity and their church’s (not Scripture’s) interpretation of modesty. (Which verse says jeans are off-limits?)

As someone who’s researched purity culture, seeing the lingering effects of these hurts breaks my heart. But there was also a false conclusion common among the countless comments: Since modesty was taught wrongly, it shouldn’t be taught at all.

West’s video has exposed a delicate but important need: to take a fresh look at modesty… and the cultural lies that have worked their way in. In light of West’s song, I thought it best to start out by debunking some common modesty myths before we look at how better to teach this aspect of Christian life to our kiddos.

When it comes to the issue of modesty, people are quick to pull the ‘oppressive’ card (just another example of linguistic theft, which we covered in our first book!) But let’s be real here folks, not every boundary is oppressive.

Unfortunately, most people who were hurt by 90’s modesty teaching were given a legalistic take on sexuality. It hinged their salvation, self-worth, and future marriage prospects on the neckline of their prom dress. (And don’t even think about a bikini!)

The problem with church trauma is that people rarely go back to see what God actually says on a matter. They just reject it altogether. Sam Allberry reflects that this is, “damning something by how it’s abused.” In short: it’s an over-reaction to the over-reaction.2He was speaking about sex here, but the sentiment still applies.

This take-my-ball-and-go-home mindset has given rise to loads of progressive ministries who are ‘Christian’ in name only. They filter the Gospel through their experiences and pain and remove any teaching that further causes discomfort. There isn’t much of the gospel left; it’s more like a hippy version of Jesus — no more controversial than a greeter at Trader Joe’s. C.S. Lewis said, “If you want a religion to make you feel really comfortable, I certainly don’t recommend Christianity.”

3. Modesty is about clothes

Newsflash: Biblical modesty was never just about clothes. Yup, feel free to read that again if you want, but track with me for a second. The top verses about modesty are:

1 Timothy 2:9: “I also want the women to dress modestly, with decency and propriety, adorning themselves, not with elaborate hairstyles or gold or pearls or expensive clothes, but with good deeds, appropriate for women who profess to worship God.”

1 Peter 3:3-4: “Your beauty should not come from outward adornment, such as elaborate hairstyles and the wearing of gold jewelry or fine clothes. Rather, it should be that of your inner self, the unfading beauty of a gentle and quiet spirit, which is of great worth in God’s sight.”

Notice the real issue is one of the heart — a heart that prioritizes getting attention from others over worshipping God.3For another look at how modesty wasn’t always about clothes, read about the women of Zion in Isaiah 3:16. It was how they conducted themselves (ie. their behavior) that was immodest, not their outfits per se. They were the equivalent of the vain Pharisee in Luke 18:10 who belted out fancy prayers to look pious, but who really just wanted all the glory and attention for himself.

Fashion is fun and there is nothing wrong with wearing attractive clothes that fit and suit your body type. But leading psychologists like Jennifer Baumgartner agree that all outfits convey a message.4See “What Your Clothes Say About You,” Forbes, April 3, 2012, https://www.forbes.com/sites/learnvest/2012/04/03/what-your-clothes-say-about-you/?sh=36dde4cb6699. If you’d like to research more, just do a quick Google search of “do clothes convey a message?”. You’ll see loads of articles, studies, and even examples of women in politics using clothing to communicate. If you feel the urge to disagree, let me ask you. What did you wear to your last interview or first date? Did it look different than what you lounged in on Saturday? Why is that? It would be foolishness to think that our outfits don’t speak. Neither is it “toxic” to warn our kids about the messages they are sending to others through their clothing choice. (We’ll chat more about this in our next post on how to explain modesty better.)

We live in a fallen world that sexualizes women and girls through (among many things) clothing.5For example, the Kardashians just released a ‘savage leggings’ line with cutouts that expose the butt cheeks, which was probably a reference to the Beyoncé song where a ‘savage’ woman uses her sexuality for power. Rhianna also released a line of leggings where a cutout exposes a good chunk of your butt crack. Yep, because that’s what comes to mind when designing workout clothes: how to expose one’s sweaty butt. Just like Tamar knew which outfit would make her look like a prostitute (Genesis 38:1-30), there are certain styles and outfits that are designed for the sole purpose of sexualizing the wearer. Denying this reality is… well… denying reality.

4. Modesty is for girls only

As we hinted at in #3, modesty is no more a clothes-only issue than it is a girls-only issue. Yet this lie still lingers thanks to the unbiblical teaching that it the girl’s main responsibility to keep the minds of their brothers on heavenly things…not their boobs. Fact: boys are going to think about boobs whether they can see the cleavage or not. (But girls, it makes it a little easier when they can’t see the cleavage.)

Can men and women intentionally lead the other into sexual sin? Yup! It’s practically the go-to plot point in every adult TV show. But that doesn’t mean that every case in which someone’s mind wanders it’s the other person’s fault (James 1:14). Scripture calls for all of us to exercise self-control over our own thoughts and actions (2 Timothy 1:7, 1 Corinthians 6:13). These aren’t girl commands, they’re everybody commands. Let’s make sure we live them out.

Finally, it’s pretty obvious why this catch phrase has hung around. Like one of those annoying insurance jingles, it rhymes and it’s memorable. Unfortunately, it’s not exactly biblical due to the word ‘hottest’.

Being ‘hot’ is different than being beautiful because is it solely sexual in nature.8Per Reddit and Urban Dictionary, good places to go for your current worldly insight. If you’re ‘hot,’ the focus is all about sex appeal, not who you are as a person. That’s why when you hear, “She’s hot,” it’s usually followed by the oh-so-charming, “I’d hit (aka have sex with) that.”

Thus, “Modest is Hottest” becomes the exact thing it’s trying to debunk: a church-sanctioned sexualization, albeit through longer skirts and turtlenecks.9This phrase was often used as a weapon within 90’s purity culture as a pithy reminder to girls about how they held the keys to their brother’s-in-Christ sexual faithfulness in their hands. This and other over-generalized (and outright false teachings) can be read about here.

Folks, modesty is biblical. Modesty is godly. No, it doesn’t have the same catchy ring that’ll fit nicely within a song, but it’s truth. Which is what we’re supposed to be teaching in the first place.

Second, may I encourage you to find your rest, value, and worth from who paid the ultimate price for you: Christ. As my pastor reminded us recently, our culture loves to promote victimhood. Victimhood might get you ahead in reality tv shows or fickle support on social media, but ultimately there is no redemption or power in it. Only Christ offers that.

You are not defined by what someone did to you. You are defined by the one who made and died for you. And He says you’re precious beyond measure. If you’re still hurting, may we encourage you to draw close to Him and seek help and support from godly sources.

Modesty can sometimes feel like a minefield but that doesn’t mean we should avoid it. Instead, we need to draw close to God, chew and spit through cultural and church teachings, and be sensitive to the Holy Spirit’s leadings in our life. In our next post, we will take an expanded look at modesty of heart, mind, and action, and offer ways on how to discuss it with your children.

Have thoughts about West’s video, the reaction to his video, or anything else about modesty? Let us know in the comments!