So You “Marched for Women” This Weekend? 8 Things You Probably Didn’t Know You Were Marching For… 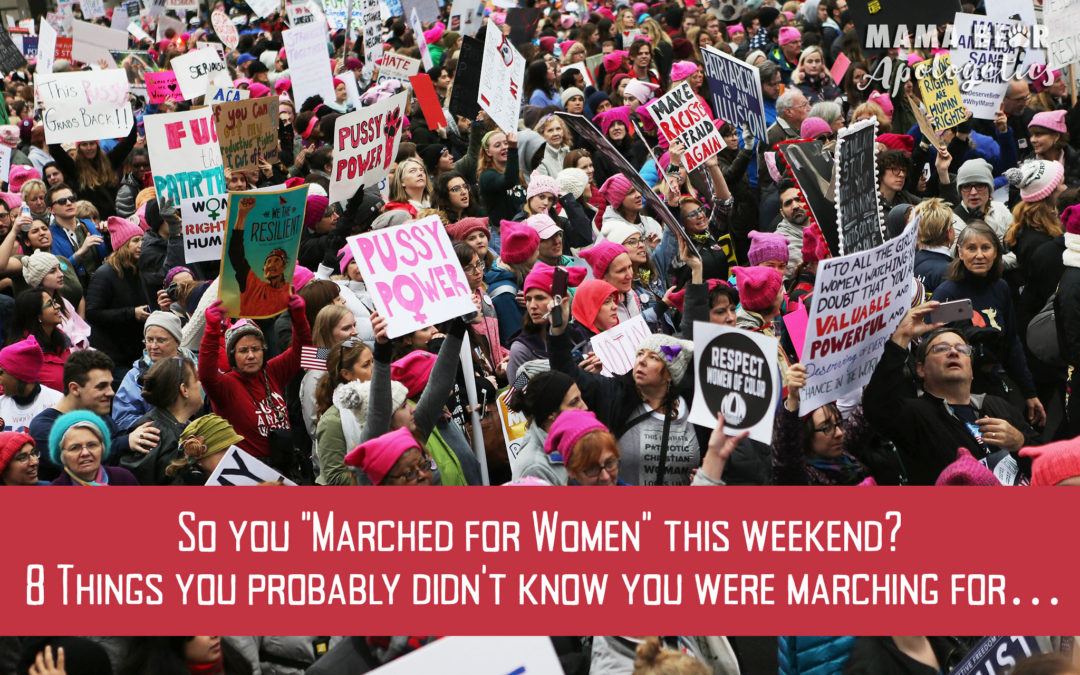 I picked the wrong week to stay off social media. I am apparently not in the circles that were notified of this weekend’s “March for Women,” so when Rebekah texted me on Saturday in a huff about pink hats, I wasn’t sure what she was talking about.  I am a woman, but apparently not the kind that the organizers want. I am not their target demographic. But then again, I think there were a lot of women who participated in the march who weren’t their “target demographic” either. They just didn’t know it.

I am always a bit skeptical when I see protests regarding things that I think are fairly uncontroversial (like women’s rights), yet cloaked in vague language. A friend posted, “Can anyone articulate what the purpose of the woman’s march is? I’ve been on the website, read comments by supporters, etc… from what I can see, the women’s rights they are marching for, we have. Do they think those rights are being taken away? I’m still at a loss.” Excellent question Janet. Let’s take a look at it. Here is a copy of the organization’s “Guiding Vision and Definition of Principles” – henceforth referred to as GVDP. Be cautious when you see protest demands, cloaked in vague language. Click To Tweet

Too many ladies heard “women’s rights” and thought, “Cool! I’m in!” without actually looking at what this organization stood for. Proverbs 19:2 warns us about the dangers of “zeal without knowledge.” So, before you go putting a “p*ssyhat” on your head to protest misogyny, maybe take a look at what you are aligning yourself with.

Resistance against what? I don’t know. It doesn’t say. But according to the opening paragraph, you marched on Saturday with a “bold message of resistance and self-determination.” Nobody can tell you what to do! You’re self-determined! And if they do, you’ll resist! Ladies, let me be clear: the idea of generalized “resistance” is not Biblical. James 4:7 says, “Submit yourselves to God. Resist the devil, and he will flee from you.” Submission is not itself evil, and there are things we are called to resist, like Satan. Until they can clarify who or what they’re resisting, I’d suggest resisting the urge to join them.

2. Abortion, on-demand, and without apology

First and foremost, if you believe that #AllLivesMatter, including those in the womb, you are most definitely not welcome. Paragraph 6 of the GVDP document states, “We believe in Reproductive Freedom. We do not accept any federal, state or local rollbacks, cuts, or restrictions on our ability to access quality reproductive healthcare services… or medically accurate sexuality education.” (I’ll let you ruminate on what “medically accurate sexuality education” is. As opposed to what we’ve been doing?) “This means open access to safe, legal, affordable abortion and birth control for all people regardless of income, location, or education.” Translation: abortion on demand, without cost, and without apology.

If you do not agree with this statement, then you were definitely not welcome at this event. In fact, Abby Johnson, former clinic director at Planned Parenthood (turned pro-life activist) was initially excited to join arms with her fellow sisters and march for women everywhere. At 7:06, she enthusiastically tweeted “Proud to be a partner of the Women’s March on D.C. Diverse voices are needed! #prolifewomen” along with a photo of her organization on the website. In just a little over two hours, she tweeted again “And now we have been removed as a partner from the Women’s March. This is almost comical.”

Other pro-life groups like “New Wave Feminists” and “And Then There were None” found their invitations revoked by the group claiming to be “inclusive of all political affiliations.” This was not a march for women’s solidarity. It was a march for abortion, and if you were not on-board, then your feminine voice was not included. If you believed that lives in the womb matter, you are #NotTheirKindOfWoman Click To Tweet

According to the official document, if you marched in Saturday’s protest, you also “stand in full solidarity with the sex workers’ rights movement” and “recognize that exploitation for sex and labor in all forms is a violation of human rights.” (emphasis mine) This is not, I repeat NOT a pro-woman agenda item. Ladies, do you realize you weren’t even marching to get rid of the sex industry or sex workers, only the exploitation of sex workers? If someone believes that there are women in the sex industry who are emotionally healthy and fulfilling their childhood dream of being paid for sex, please introduce me. I would like to hear her story. Just because you choose to be exploited does not mean you are not being exploited. For all the ladies in the sex industry, I implore you to recognize your inherent beauty and worth. You are more than a body meant to be used and tossed aside by a man. No matter what the world tells you, you are precious and valuable. I will not march for your continued bondage to a philosophy that tells you otherwise.

Yup. You heard that right. If you marched for women everywhere, you were also marching for the disarming of police officers. The documents calls for “an immediate end to arming police with the military grade weapons and military tactics that are wreaking havoc on communities of color and sovereign tribal lands.” The addition of the word “military grade” is the only loophole I can see, and likely added so that the organization could claim that they weren’t meaning just guns. However, since I’ve never heard of a tank rolling through the inner city, this bullet point is shooting blanks unless they are really aiming to disarm the police in general.

No, that is not a joke. I am not adding extra letters to be funny. The LGB movement (which became the LGBT movement) is now the “lesbian, gay, bi, tran, queer, two-spirit and gender nonconforming” movement. I don’t even know what it means to be “two-spirit.” So, if you thought you were marching for women Saturday, you were actually also marching for the right for “non-judgmental, comprehensive healthcare with no exceptions or limitation” and “access to name and gender changes on identity documents.” (emphasis mine)

6. Honoring women affected by violence… but not actually condemning those who perpetrate it.

This one was strange, and some people may not agree. While the paragraph dedicated to violence against women sounds like they are condemning violence against women, the language is oddly vague. It never actually comes out and condemns people or groups who perpetrate violence against women, and it never spells out what constitutes a violent act.  I have to be careful with this point, but let me just ask the question: why are they so specific with what they mean by “woman” (black, indigenous, poor, immigrant, Muslim, lesbian, queer, trans, disabled, deaf) and yet so unspecific with what they mean by “violence”?  It never actually condemns the perpetrators. It just “honors the women taken before their time.”

I can only assume that is what the bullet point was referring to which said, “We support Indigenous women’s right to access, own, develop, and control land and it’s resources.” The only thing this has to do with women, is that they are specifying women. I don’t know what all the facts are on this one, but I feel skeptical if the organizers felt the need to slip it into the agenda when it has nothing to do with the actual purpose of the march. See Jay Richard’s point #1 on “When to doubt a scientific concensus.” It should always be a red flag when a bunch of disparate ideas get bundled together.

This one doesn’t even mention women. It just states, “We believe that every person, every community and Indigenous people in our nation have the right to clean water, clean air, and access to and enjoyment of public lands. We believe that our environment and our climate must be protected, and that our land and natural resources cannot be exploited for corporate gain or greed – especially at the risk of public safety and health.” Now don’t get me wrong. I am all for protecting the environment. But what does this have to do with a women’s march? Nothing. Because this was not a women’s march. It was a manufactured partisan political protest cleverly disguised as a women’s march.

While I usually try to keep my rhetoric to a minimum and stick to the facts, I would like at least one paragraph to say what I really think.  I did not participate in the March for Women, nor would I even if I had been aware of it. Why? Because they do not represent me. I fully reject views of femininity that are so crude as to place female genitalia on their heads and call it “empowered.” I refuse to call myself a “nasty woman,” as if that were a badge of honor. I refuse to steal the title of Victim from previous societies and other cultures that have faced legitimate oppression. I rejoice that I live in a country where I already have the right to freedom from violence, freedom from tyranny, freedom to vote, freedom to own my own business, freedom to work, or freedom to be a stay-at-home mom if that is what I choose. I refuse to march for the “right” to take away all these freedoms from a child in utero. And more than anything, I refuse to conform to the feminine stereotype which says that all you have to do is manipulate my emotions and I’ll be putty in your hands, mindlessly licking up whatever agenda you put in front of me. You wanted a woman who embodies resistance? You got it. You wanted a woman who embodies 'resistance?' You got it. #NotMyMarch Click To Tweet

**UPDATE** Due to the viral nature of this article, Rebekah and I found it prudent to do a podcast to better address critiques of this article, as well as shed additional light on the controversy. I do not affirm division for division’s sake. There is no purpose in division unless we are seeking unity in something greater. In the podcast “Addressing the Divide From the Women’s March,” Rebekah and I ask and answer 4 important questions: 1) What is the good that we can affirm from the march? 2) Why is there such division over something as seemingly uncontroversial as “women’s rights?” (hint: there’s a reason…) 3) What kind of unity does scripture call us to? Are there things worth dividing over? and 4) Where do we go from here? How can we have productive conversations with our children and friends? This podcast is a bit longer than usual (54 minutes), but it is also a complex topic. I encourage everyone to listen to it in its entirety.