Are We Living in the Zombie Apocalypse? 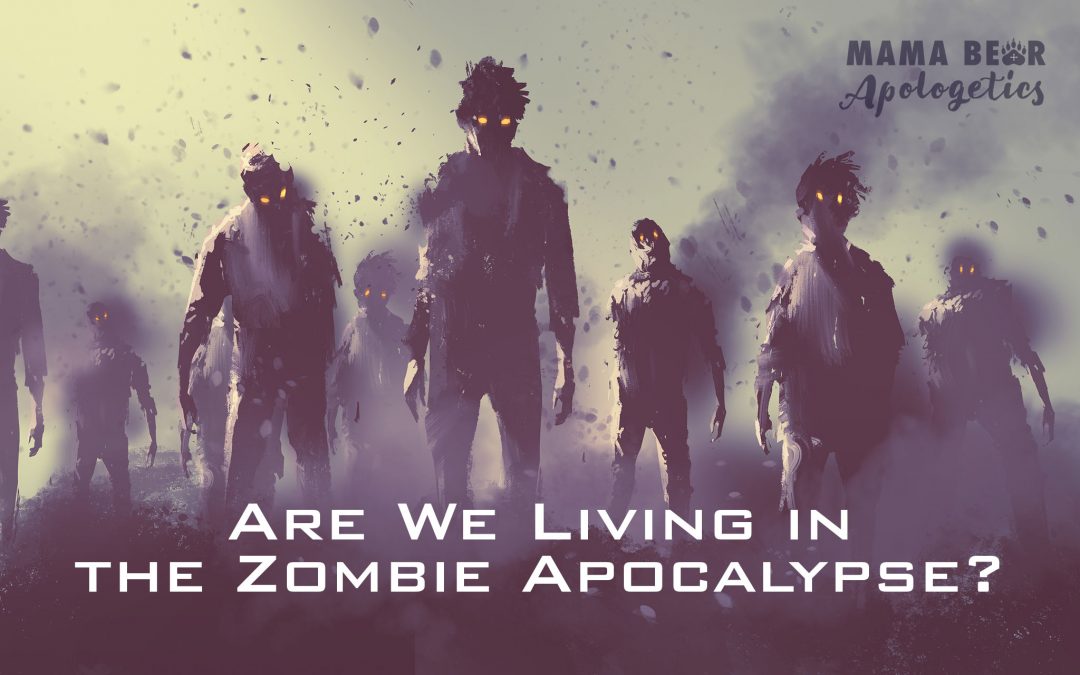 Our society is obsessed with this idea of a zombie apocalypse. There are movies, and tv shows, and websites, and Facebook groups, and yes, even preparation kits available on Amazon. While there are certain things in pop culture that I just roll my eyes at and move on, I think it is wise to pay attention when certain themes seem to resonate strongly with an entire culture, namely because it probably either: 1) hits upon a foundational truth or 2)  hits upon a rabidly guarded lie. In the case of the zombie apocalypse, I think a case can be made that Hollywood has hit upon a very real theme of the universe. Themes tend to resonate when they address either 1) a foundational truth or 2) a cherished lie. Click To Tweet

In our book for Biola this week, one of the authors began discussing something called  “two-register cosmology.” This is essentially the doctrine that there is an “upper register” which “is the invisible dwelling place of God and His holy angels,” and there is a “lower register” which is “called earth, but includes the whole visible cosmos from the planet Earth to the star studded sky.”  The author continues on the next page, “Thus, the upper and lower registers relate to each other spatially, not as different locations, but as different dimensions of the one cosmos. . . Ultimately, the upper register will become permanently visible, for the two registers will be united in the last day, removing the present distinction between the two levels.” [1]

What he is saying here is that the spiritual dimension can be thought of as specially occupying the same area as our current reality, yet is unseen to us. This can be supported by the passage in Acts where Stephen “looked intently toward heaven” and saw “the Son of Man standing at the right hand of God.” (Acts 7:55-56) It is also evident in the Old Testament when Elisha’s servant saw that the hill was full of horses and chariots of fire all around.” (2 Kings 6:17)

I must qualify that I am not 100% committed to this two-register cosmology, but the concept does seem to have merit, and it got my creative mojo flowing in an entertaining direction. I thought “I bet this is the death that scripture talks about in Genesis 3 when Adam and Eve ate the fruit – we died from the perspective of the upper register, and our life in the lower register was all that remained.” I of course immediately tried to picture what that would look like from an angelic perspective and… you guessed it. It looks like the zombie apocalypse!

I myself have very little interest in the zombie apocalypse. I have not watched a single movie about zombies, or a single episode of the Walking Dead. (*That might be a lie… My husband might have tricked me into watching part of “Shaun of the Dead” when we were first married.) However, let me say one thing Mama Bears: if your child is fascinated with the idea of the zombie apocalypse, this is a perfect opportunity to address why society tends to gravitate towards certain themes. Ask them “Why do you think so many people enjoy talking about the zombie apocalypse?” Take them a step further and ask “Are there any truths in scripture that could help us understand why people are so drawn to the idea of a zombie apocalypse?” The bottom line is that people like talking about themselves, and they are drawn to themes that reflect their own reality in some way. The fact that we as a society ARE so drawn to the themes depicted in the zombie apocalypse is just proof that there are truths being depicted in this element of pop culture that resonate with the truths already written on our hearts.

Have you noticed any other parallels between the zombie movies and scripture? I haven’t seen them (the movies,) so tell me about it in the comments!