4 Good Things That Go Bad When They Are Idolized 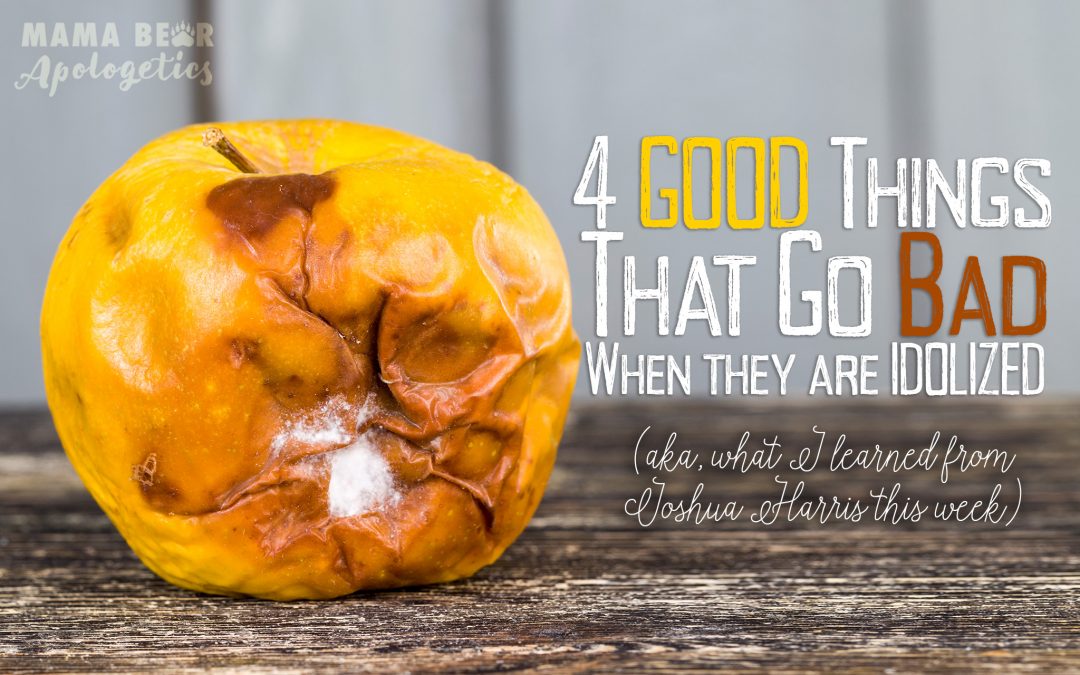 The internet has been abuzz with Joshua Harris’ announcement that he and his wife are separating AND that he is no longer a Christian. In case you missed the whole I kissed Dating Goodbye craze in the late 1990’s, let me summarize: Joshua Harris was a prominent voice in purity culture (which Amy has been blogging about here and here.)  In his early 20’s, he wrote a book advocating for “courtship” instead of “dating.” This change in perspective would supposedly allow young men and women to avoid emotional ties that would hinder their future marital happiness. There’s too much to go into here. In short, what started as one young man’s dating advice got turned into the 67th book of the Bible for many youth groups.

People are desperate for answers. In the wake of Harris’ announcement, many are pointing to other prominent Christian figures who have gone through a similar public “breakup with Jesus”—Derek Webb being one of them. In an article titled “Derek Webb: A Reformed Atheist” author, Steve Fraley, analyzes Webb’s demise from reformed Christian to atheist, postulating whether or not the reformed theology was to blame.1Reformed theology teaches that salvation is solely on the basis of whom God chooses. Upon Webb’s deconversion, many stepped forward to declare that this theology had also been their kryptonite. In essence, doubt and unbelief were proof that “God had not chosen them.” And according to staunch reformed theology, you cannot change the will of God. Better to just accept your fate.2(Some would of course claim that this is a perversion of true reformed theology, but I do not have time to open up that can of worms here.

I have started noticing a trend In many of the deconversion stories I have read. What seems to precede the “falling away” for several of these men and women is idolatry of some sort—placing an unhealthy emphasis on something other than the Gospel. Many of these things are not—in and of themselves—bad. When placed in competition with Christ, there’s only so long that the soul can pretend to serve two masters. Eventually, there is a schism and often, it is orthodox Christianity that is left behind. Here’s a few of the trends I have noticed.

1) A particular theology…more than the whole of Scripture

What does this look like: Now I don’t want to sound like I’m picking on reformed theology. There is a very Scriptural case to be made for it. I have, however, noticed a really unhealthy emphasis on it by some of its adherents. Just search the word “reformed” in the groups’ section on facebook and you’ll get an idea of how committed people are to this theology. I mean really? Does someone really need a “Reformed and into Home Décor and Homemaking” group? You can’t help your Arminian friends also decorate their houses? [Update: the founder of this group has personally contacted me to clarify that her group welcomes all Christian men and women who are interested in home decorating. I apologize for the confusion this has caused.]

Having correct theology is important. That’s one way we worship Christ with our minds. However, when we take any theology and elevate it above the Gospel, it turns rotten. It doesn’t even matter the theology—orthodox or unorthodox.3We see this in the “health and wealth gospel” (aka prosperity gospel) where God’s earthly favor is the main “proof” of an individual’s amount of faith. It happens with spiritual gifts as well. I’ve seen at least one church elevate “speaking in tongues” to this pedestal. They literally had a huge bulletin board with pictures of members and the dates that the member first started speaking in tongues. Not their date of baptism or private repentance and salvation. Speaking in tongues. We can turn anything into an idol. When it becomes an idol, it becomes a competitor for Christ in our hearts and we’ll eventually have to pick one.

How to tell if you are doing this: Do you tend to get more excited and feel closer to a person if they identify themselves with a particular theology than you do if they identify themselves as a Christian? Do you tend to have a lot of debates about one particular theology? Have you ever been tempted to view those who disagree with your theology as not “really saved,” or at least not as “mature” in their Christian faith?

2) A particular pastor… more than the bride of Christ

What does this look like: My husband John just released an article which discusses the 12 signs of a personality cult. I suggest you take a look at it. Certain churches are known more by their pastor’s name than by their church’s name. While this is not always avoidable, it should be noted. If a church’s entire culture is based on one key individual, then what happens when that individual falls from grace, or lands him or herself in some sort of sin or scandal?

I watched this happen to my childhood church.4Our pastor started out telling the congregation several times a year that he wanted to run the church in such a way that if he ever had a great falling, that nobody in the congregation’s faith would be rocked because he had sufficiently pointed us to Christ. Ironically, 15 years later, this is exactly what happened. And while I don’t know if many people lost their faith, the church was never the same. And pastor’s decline was preceded by several of the points John makes in his article. Our church was not a megachurch, so our fallout was much smaller. The same cannot be said for churches like Mars Hill (ala Mark Driscoll) and Sovereign Grace Ministries (ala CJ Mahaney). With the #metoo movement working its way through our American pews, we are seeing celebrity pastors crumble at an unprecedented rate. I have no doubt that the people who studied under Joshua Harris are having their own crises of faith right now.

Unfortunately, we can’t prevent other people from making idols, so nobody can idol-proof their ministry. We can idol-proof our hearts though. Bottom line—your loyalty to a spiritual figure should never compete with your loyalty to Christ. Ask yourself—if the person I admire the most were to announce that they were walking away from the faith, how badly would it affect my faith? Our faith is to be based on Christ—His life, death, and resurrection. That is why I love apologetics. No matter how many celebrity teachers suddenly decide to fall away, I can’t unknow what I know. (see my testimony in chapter 1 of the Mama Bear Apologetics book.)

How to tell if you are doing this:  If you don’t personally know the leader and your main exposure to him or her is from a pulpit, ask yourself these questions: If and when you hear an accusation against a leader, is your first instinct to defend them or to seek more information to evaluate? Do you worry more about a ministry’s reputation than you do about truth (even ugly truth) being revealed? Do you seek out information that might change your mind, or do you only look at things that confirm what you already believe about a person? Has the downfall of a Christian leader significantly impacted your faith?

3) Our own identity… more than our identity in Christ

What does this look like: Unless we are defining ourselves as children of the living God, we are basing our identities on shifting sand. Every part of what I see as my “identity” is open for reinterpretation in our postmodern world. The going narrative is that however I am, I was born that way, and God doesn’t make mistakes. While this statement is technically true, it doesn’t take our sin nature into account.

We get wrapped up in how we think we were made—introvert or extrovert, thinker or feeler, banker, scientist, athlete, artist, writer, gay, or straight. Christ said that anyone who wishes to follow Him must “deny themselves and take up their cross.” (Matthew 10:38) There is no part of our identity that is immune to this call. My profession, my personality, my interests, habits, and yes, even my sexuality will all have aspects that I need to deny and submit to Christ—even when it’s hard, and even when it feels unnatural. Introverts are called to fellowship. Extroverts were modeled (by Jesus) to have solitary time with God the Father. Feelers are called to love God with their minds. Thinkers are called to love God with their hearts. Those outside of Biblical marriage5Biblical marriage is defined between one man and one woman for life, with exceptions in the case of unfaithfulness. Matthew 19:3-9 are to honor God in their singleness. Those inside of Biblical marriage are to honor God in their marriage. Christ accepts all of us exactly as we are, but following Him means becoming more like Him. The moment that we over-commit ourselves to an aspect of our “identity” is the moment that we stop denying ourselves to follow Christ. Instead, we start demanding that He make the journey of carrying our crosses more comfortable. That is, unfortunately, a promise He never made.

How to tell if you are doing this: Do you have a modifier before the word “Christian” to define yourself? Do you find yourself making excuses to not change aspects about yourself because you feel like it’s “just the way you are” or “how God made you?” Do you think there are certain aspects of your identity that are unfallen and to be accepted “as is?” Do you conclude that if someone doesn’t accept all the parts of you, then they hate you?

4) An emotional experience… more than the everyday faith journey

What does this look like: In the Mama Bear Apologetics book, I mention that people can sometimes mistake experiences with Jesus for Jesus Himself. There is good to be had in mountaintop experiences at summer camp and intimate times of rapturous worship at a conference. However, our addiction to these experiences can sometimes eclipse the everyday relationship that we are called to have with Jesus.

I compare it to those dating reality TV shows where the couple shares a kiss after hang gliding over the Grand Canyon. It’s really easy to fall in love over candlelit dinners on your own private island, but the love that is formed there is not necessarily the same love that cleans the toilet multiple times a day while your spouse has the stomach flu. It’s not the love the does the dishes or forfeits the last piece of coveted cheesecake. These are the more mundane everyday acts of love, but they are closer to reality than a zip line date over a waterfall.

Similarly, our relationship with Jesus does not always consist of going from one emotional high to another. It is a faith journey, winding through peaks and valleys. This may not sound nearly as sexy, but it’s real and much more stable than anything we can conjure up on our own.

How to tell if you are doing this: Do you feel like God is “less present” when you are doing ordinary parts of life than when you are having an emotional high? Does suffering jolt you out of love with God? When things feel dry, do you press in to Jesus more, or seek another experience?

It is when we idolize these, however, that a good thing from God goes bad.

Have you noticed something besides these four? Tell us in the comments!