But Jesus Never CLAIMED to be God? Actually, He Did—3 Times 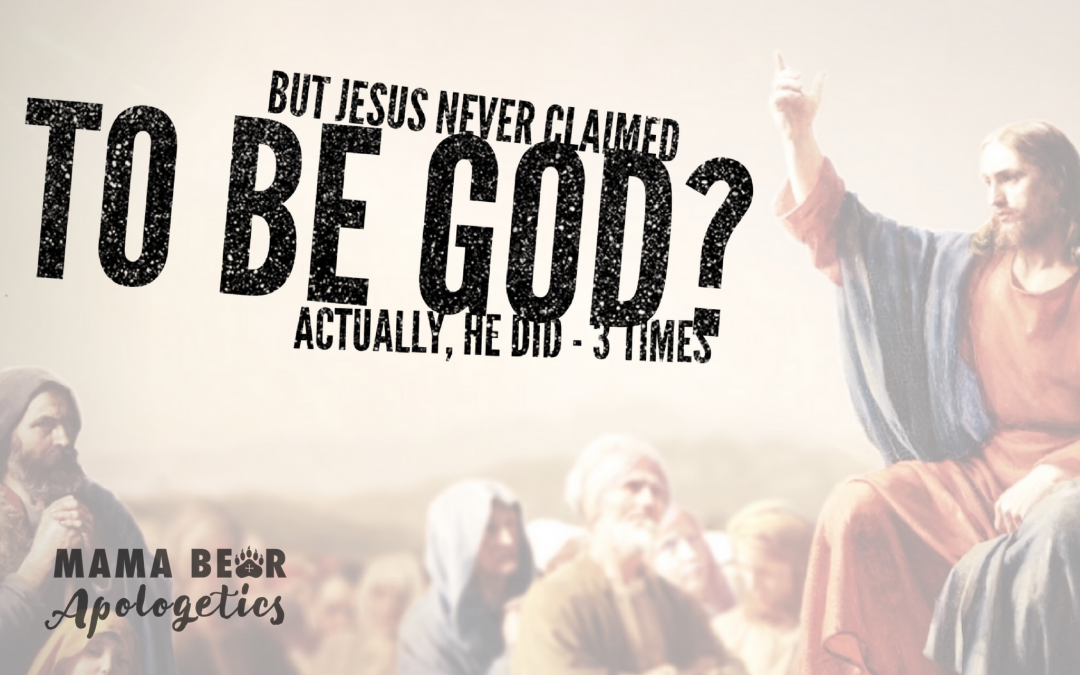 One of the most common objections skeptics raise to the deity of Christ is the idea that Jesus never actually claimed to be God. Sure the church ended up worshiping Him as such, but this was a later development that was projected onto Jesus but wasn’t something He intended to claim for Himself….or so the argument goes.

If you are expecting to find a Bible verse in which Jesus stands on the Mount of Olives and proclaims in English, and every other known language, “I am God!” You won’t find it. He actually did one better….but we’ll save that for the end.

Biblically, there are several ways to know that Jesus is God. He accepted worship, possessed all the eternal attributes of God, did things only God can do, and was given titles of deity. (Those are all great subjects for future blog posts.)

But Jesus did also CLAIM to be God, and here are 3 times He did just that:

After His arrest, Jesus was brought before the Sanhedrin, the Jewish court. The high priest asked him point blank: “Are you the Messiah, the Son of the Blessed One?” Jesus replied, “I am…and all of you will see the Son of Man seated at the right hand of the Power and coming with the clouds of heaven.”

Reading with modern eyes, it looks as if Jesus is simply claiming to be a “son of man”—not God Himself. But when set within its cultural and biblical context, Jesus was making a reference to a prophecy in the book of Daniel. This not only identified Him as the “Son of Man” predicted in chapter 7, but the eternal Sovereign Lord of all, who will return to judge the very court in which He now stood trial. When seen in the light of Psalm 110, Jesus was claiming to sit on the very throne of Israel’s God.

Still fuzzy? It wasn’t to the biblically literate Jews who heard him make these claims. In fact, Jesus’ claim to be God was considered blasphemy, and according to Leviticus 24:16, blasphemy was punishable by death. The high priest acknowledged his understanding of this by tearing his robes and calling for Jesus’ execution. (Mark 14:63-65)

One day, Jesus was walking around the temple complex and was surrounded by some Jews who wanted to know if He was the Messiah. After identifying God the Father as “greater than all,” He said, “The Father and I are one.”

Through modern eyes, this could look like Jesus was simply saying that He and God had some kind of special connection—that they were really “in sync.” But when seen through the eyes of ancient Jews, Jesus was actually claiming to be of the same essence and nature as God Himself.

We only need to look at the reaction of the Jews to know that they understood what Jesus was saying.  They immediately picked up stones to stone Him for “blasphemy,” saying, “because you, a mere man, claim to be God!”

While having a heated argument with some Judeans about their relationship to Abraham, they asked Jesus in verse 53, “Who do you think you are?” To this Jesus answered, “Truly, truly, I say to you, before Abraham was, I am.” I AM. This is Jesus’ most explicit claim to deity.

Modern eyes might read this and think, I am…. what? Rewind over a thousand years to Exodus 3, where we find Moses standing face to face with a bush engulfed in flames. From within the bush, God calls Moses and unmistakably identifies Himself: “I am the God of your father, the God of Abraham, the God of Isaac, and the God of Jacob.” When Moses asks for God’s actual name, God answers, “Say this to the people of Israel: ‘ I AM has sent me to you.'”

​When Jesus identified Himself as “I am,” He was not only claiming to be God, but the very God of the Old Testament: The God of Abraham, Isaac, and Jacob. Of course, the Jews understood exactly what He was claiming, and once again, picked up stones to execute Him for blasphemy.

Jesus was an intentional and articulate communicator and there was no ambiguous language in His claims to deity. The people to whom he was speaking were not confused—they got the message.

​Three times He claimed to be God, and three times they wanted Him dead for it.

Alisa Childers is a former CCM recording artist, turned Mama Bear apologist! She LOVES when people act like she has no idea what she’s talking about because she’s “just a musician.” You can see more writing by Alisa at www.alisachilders.com