Is Deconstruction the Same Thing as Doubt? 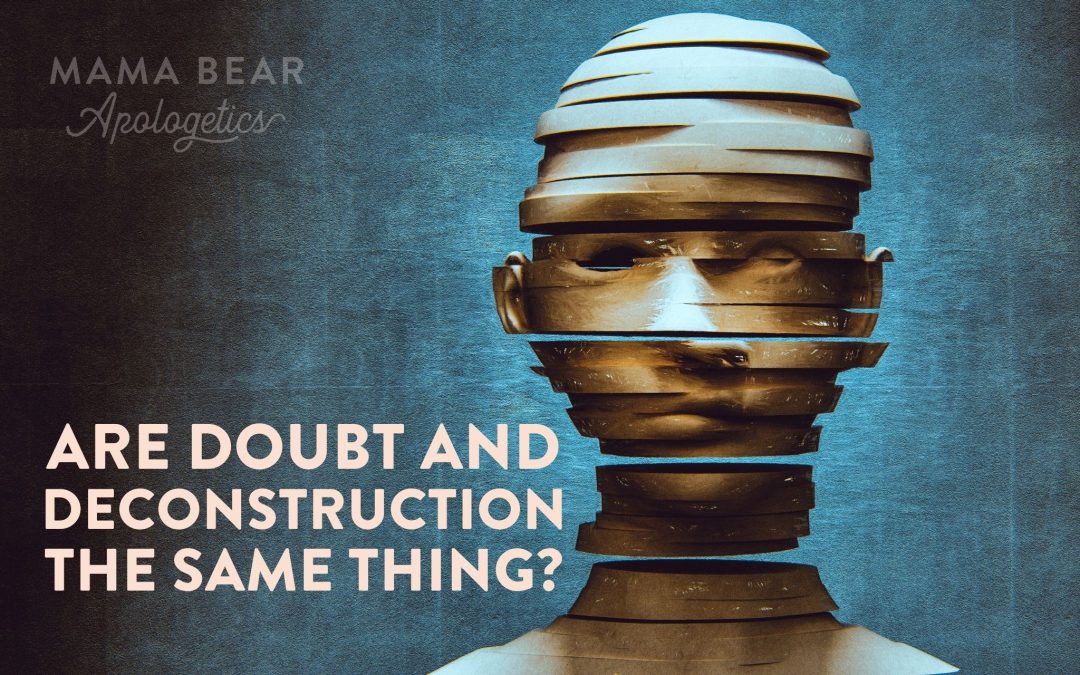 A clip from Skillet frontman John Cooper has recently been making the rounds on social media. In it, Cooper is heard saying that “it is time to declare war on this idolatrous deconstruction Christian movement.”

One set of people claims that Cooper is causing further harm to Christians who are already struggling with their faith. The other set of people is praising Cooper for taking a stand against the so-called “Christian deconstruction movement.” So which is it?

What do we mean by the deconstruction movement?

The process of deconstruction usually goes like this: an influential, self-proclaimed Christian announces to their thousands/millions of fans that they no longer believe in the faith on which their careers were built. Through the process of “deconstruction,” they now realize that X, Y, and Z questions have no good answers (usually things that theologians have been discussing for hundreds of years).[1] Due to this perceived lack of answers (and usually accompanied by stories of “harm” they have seen within the church), they can no longer call themselves Christian or trust the Bible.[2] They are all about some Jesus, but they feel the need to apologize to all the people they may have hurt back when they adhered to biblical principles.[3]

There’s another word for this phenomenon. It’s called apostasy or deconversion, and it’s not a new thing. Since the beginning of Christianity, we’ve seen some people who have apostatized (i.e., walked away) from the faith. The Early Church was dealing with this within the first generation of Christianity (2 Timothy 4:1, 2 Peter 2:20-22, 1 John 2:19, and more…).

But we are talking about more than a process here; we are talking about a genuine movement. If I were to break it down, I’d say a movement consists of 1) a group of people who are 2) journeying together 3) for a common purpose and 4) gaining adherents. The new category “Christian deconstruction” fits all the criteria.

Not only are people questioning the tenets of the faith, but they are finding community with others doing the same thing. That’s the whole point of adopting the label: it gives them a group to belong to.

Sometimes they see themselves as the only ones bold enough to question traditional Christian teachings. And when they meet others who are questioning like themselves, they lock arms and buckle down together. And like any movement, those who most fervently embrace the label are trying to get others to join them on the quest — in this case, by vocal and public “deconstruction” announcements intended to evangelize listeners into the club.

What are deconstructionists really questioning?

A lot of this comes down to the problem of word choice and linguistic theft. Classically, deconstruction involves a postmodern view of language. It denies that a text has any objective meaning, or if it does, that the meaning can be objectively known (see chapter 8 in Mama Bear Apologetics). This translates directly into how a person reads the Bible.

Once you doubt that you can even know what the Bible really says, very few people are willing to take the time to “reconstruct” their faith according to what the Bible teaches. It’s a catch-22.

The people who adopt the banner of deconstruction often deny (at least at first) that they are undergoing classic deconstructionism. They claim that their end goal is a purer faith, one which has stripped away the “traditions of men” that Jesus denounced in Mark 7:8.[4] They are like the reformers, or as reformers are called now, the “original deconstructionist.”

Mama Bears, this is not true (or even possible), and here’s why. First, anything which assumes that the Bible has original meaning to which we should return is by definition the opposite of deconstructionism. Deconstructionist philosophy claims that meaning and the text are separate and subjective.

Why we need to be careful how we identify

The words we use matter. The identities that we speak over ourselves matter. I understand why some people were offended by John Cooper’s comments. As one of my sweet friends put it: “When someone says they are declaring *war* on a movement, the people who compose that movement or are considering ideas from that movement are reasonably likely to feel like they are perceived as the enemy.”

There is a very simple solution to this problem, and we shouldn’t be afraid of saying it: don’t claim to be a part of a movement that has always (until just recently) been associated with deconversion, apostasy, and rebellion against God. It will not go well for you.

Be a struggling Christian. Be a questioning Christian. Be a wounded sheep if that’s what you are. But when you start marching under the identity “deconstructing Christian,” you are taking on all the weighted baggage that comes with that word. It would be like saying, “I’m a wolf, and by wolf, I mean I’m a struggling Christian who needs care and compassion.” Just because you have changed the definition doesn’t mean that everyone else is now required to use a different word to denounce wolves. Or that the Bible is causing harm by warning Christians against wolves! (Luke 10:3, Acts 20:29)

How do you approach a child who thinks they are “deconstructing” their faith?

We want to be loving toward those who are struggling in the faith, and we should actively be involved in helping to “snatch them from the fire” (Jude 1:22-23). So, what can we do as parents?

The first thing to do is ask them questions and then just listen — without judgment. This means they may say things that are nonsense. Let them say nonsensical things. As verbal processors know, sometimes you need to get out a whole lot of things that aren’t really the issue to finally uncover the actual issue. If you keep stopping them in this process to address factual errors, neither they nor you will ever get to the bottom of what’s actually going on in their heart.

As I mentioned above, often people aren’t even sure what the real problem is. And who knows how long it’ll take to uncover the actual issue? A kid may list out everything they heard on some podcast as their “reasons” before you finally uncover the root problem, like how rejected they feel by their peers at youth group. Or how hurt they are over a parental divorce. Or how angry they are at an unanswered prayer request.

At some point, the nonsensical things will need to be addressed. The initial brain dump isn’t the time. After they start feeling some relief at being able to express their doubts, then you can start gently asking more clarifying questions (remember, 1 Peter 3:15 doesn’t just say give a defense…it says to do so with gentleness and respect).

If they say they are deconstructing, it is perfectly okay to ask them what they mean by that. If they are just questioning, then remind them, “It sounds like you just have questions. Do you mind if we use the word ‘questioning’ to refer to what is going on so that you don’t accidentally lump yourself in with a word that has a lot of baggage?” Or maybe they are a “wounded sheep.” Or maybe they are a struggling Christian who is having difficulty submitting their desires to God’s authority. Whatever the issue, how they choose to identify themselves matters.

The truth is, mama bears, words are not meaningless. Jesus Himself is called “the WORD made flesh.” Our enemy is like a roaring lion, seeing whom he can devour. He would absolutely love for us to assume a new identity and to march under his banner, even if we don’t know what we are doing. The more your child identifies him or herself as “deconstructing,” the more they will entertain the conclusions that other deconstructionists have concluded.

We can’t answer all their questions for them. But we can at least prevent them from assuming an identity which, in most cases, serves to woo them away from the faith. And even more, we can help protect them from feeling attacked when Christians speak out against the evils of deconstruction.

[2] Such are the stories from people like Marty Sampson (a former worship leader of Hillsong Church), Joshua Harris (author of I Kissed Dating Goodbye), Rhett and Link (comedians and popular YouTubers), and Jon Steingard (former frontman of the Christian band, Hawk Nelson).

[4] There are a few stories of individuals who claim to have “deconstructed” their faith and rebuilt it into something stronger. I would still say that they are using the wrong word, however. True deconstruction does not leave room for reconstruction.