The Importance of Incorporating Suffering Into Our Children’s Worldviews 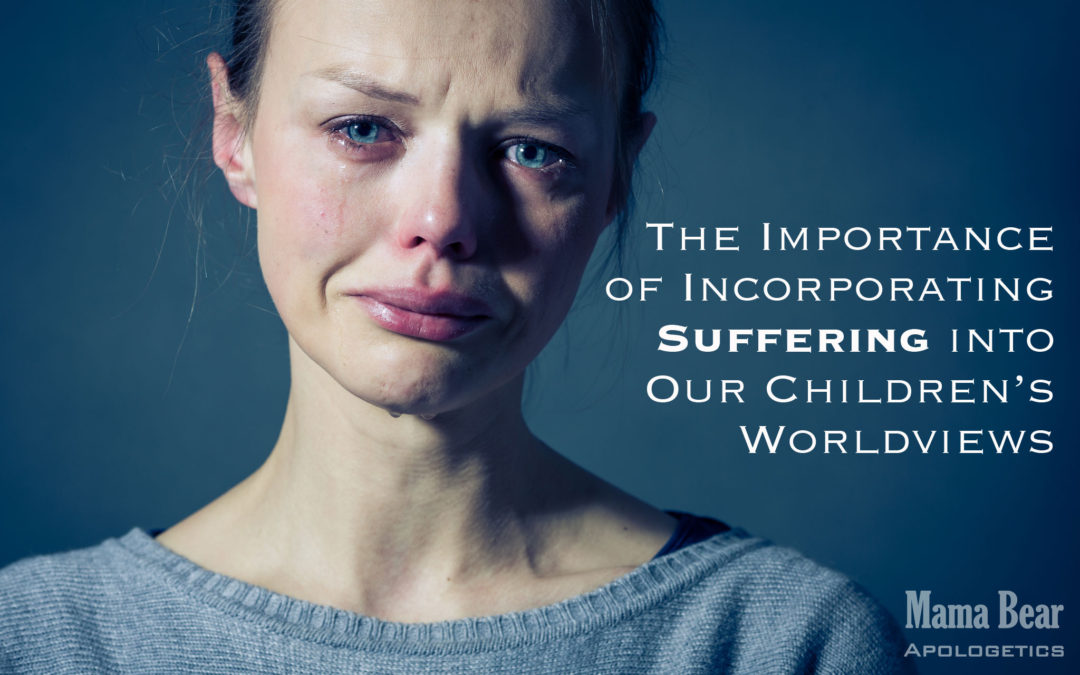 All too often, I have heard evangelists on radio or television preaching a “better life” with Jesus. Just turn to Jesus and the problems of this world will fade away! The problem with this view of Christianity is that it’s simply not true – at least not in the way we Westerners envision it to be. In all the happy-clappy books on “101 Promises of God,” rarely have I ever seen God’s promise for trials and tribulations included (John 16:33). If our children are going out into the world without suffering being a part of their worldview, they will inevitably feel betrayed. The storms will come. They will not get accepted into the college they really wanted. They will have a painful breakup. God forbid they get really sick. Feelings of betrayal come when someone has been presented with a bait-and-switch version of Christianity. Our goal should always be to present the story of reality, in all it’s gnarled-up, sinful glory. That way, when they are face-to-face with pain and suffering, it does not come as a surprise.In all the happy-clappy books on promises of God, rarely have I seen suffering included. Click To Tweet

Britt Merrick | When Sparrows Fall from Reality on Vimeo. Thank you @brittmerrick for such a powerful message on how to deal with suffering. Click To Tweet

I once had to take a little boy I was babysitting to get a flu-shot. So what did I do? I had him watch the pharmacist give it to me first. I told him I wasn’t asking him to do anything that I wasn’t willing to do myself. I walked the painful road ahead of him so that he would know that it would be ok. He was not alone, even though it was still painful. THAT is what Jesus did by becoming flesh. He didn’t come to take away all of our problems. He will one day. That day is coming; but that day is not today. When Jesus was on the cross, He was basically saying, “Watch me; watch how I do it. Life is painful, but I won’t make you go through anything that I haven’t gone through first.”

Jesus was well-acquainted with suffering; as Christians, we will be too. The ones who understand this are much less likely to feel betrayed, and walk away when they experience hardships in this life.Not understanding the promise of suffering leads to feelings of betrayal when it is experienced. Click To Tweet

Sometimes we want to spare our kids from our own suffering. Granted, we don’t want to turn our children into our confidantes and tell them everything, but I think it is important for them to see us suffer well. Despite all our apologetics, a person who suffers well can testify to the reality of Christ is a way that arguments never will. Embrace the struggle, and let your kids watch you praise God in the storm. They will remember it.

Do you remember a time when you saw a Christian suffer well? Have you had periods of time where God really met you in your suffering? Tell us about it in the comments!