The Importance of Incorporating Rejection Into Our Children’s Worldviews 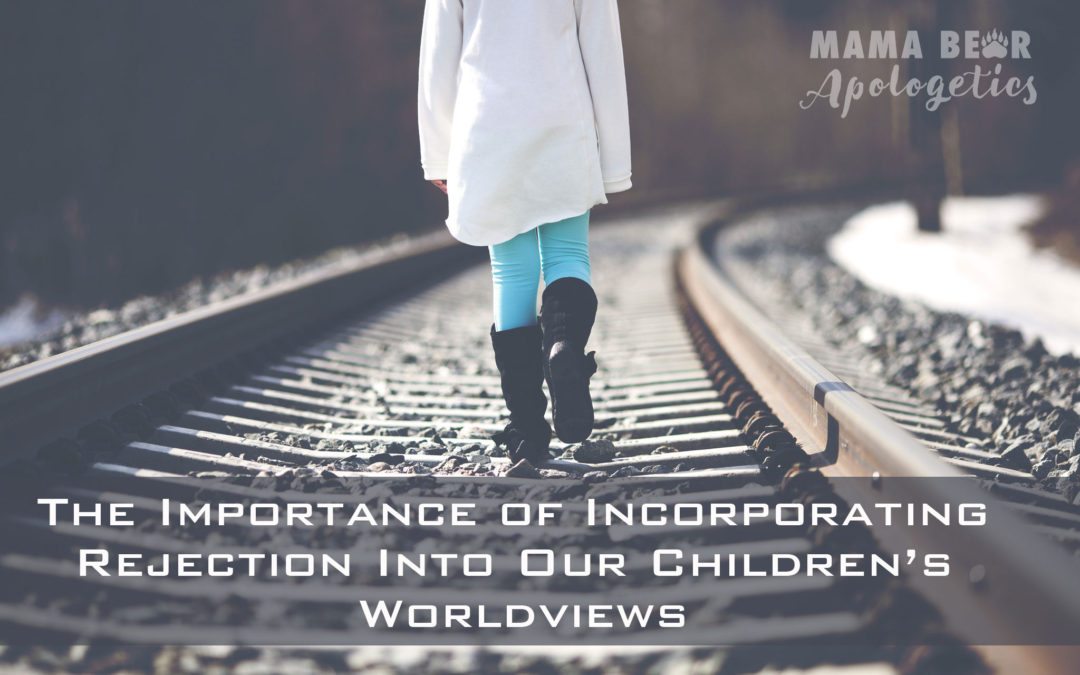 In the previous post, we discussed the necessity of teaching our kids that suffering is not evidence against God, but rather a part of living in a fallen and broken world. Jesus did not come to save us from everything in the world, at least not at the present time. However, He did come to provide ultimate redemption at a later time. The second major reality that can potentially tank our children’s faith if not incorporated into their worldview is persecution and rejection.

Jesus said quite clearly that we should expect to be hated by the world. So why do we still hear of churches and pastors evaluating their success by how liked they are by the world? Seeker friendly is one thing. Straight up compromise is another.We are called to be 'seeker-friendly,' but not at the expense of truth. Click To Tweet

I must strongly emphasize that the concept of being hated by the world is a delicate topic that people habitually take to annoyingly polar extremes. On one side, we have middle aged pastors squeezing themselves into skinny jeans and watering the gospel down to the point of it sounding oddly similar to the inscriptions in my 7th grade yearbook: “Don’t change a thing! You are perfect the way you are! Keep in touch! See you soon!” On the other side of the street corner are people carrying signs reading “God hates homosexuals” or “Turn or Burn” under a misguided interpretation of “God’s word never returning void.” (If you truly believe that, why not walk around with Isaiah 28:8 instead? Go ahead. Click on it. You know you’re curious now.)

So acknowledging that there are two extremes, please don’t interpret anything I say as falling into either. Yes, we are called to a winsome faith, by becoming “all things to all men, so that through it we might save some.” But not at the cost of the Gospel. And while some people think they are being “persecuted for Christ,” in reality some of them are being persecuted for being obnoxious.

The concept of persecution and rejection for the faith is one of the most difficult tightropes in Christian parenting. I know of many adults who don’t even understand the balance. Our desire to be “relevant” has begun to operate under the misunderstanding that if we are not liked, we have done something wrong. This concept can be especially confusing for children whose maturity is often still operating at the consequence/reward stage. Explaining to children “People may not like you because we follow the Bible” is a difficult reality. It becomes even more difficult when the child feels the need to announce to everyone who slights him or her, “You don’t like me because I follow the Bible!”

I could say that I was “one of those kids” who didn’t understand what to say and what not to say, but let’s be honest: pretty much all kids are those kids.

It should be noted that preparing our children for rejection runs the risk of them looking for rejection, like one of my past students. This student had a fire for truth that was potentially beautiful – once channeled correctly – but obnoxious in its present state. He was so ready for persecution that he went out looking for people who were going to persecute him for Christ, and I was the evil science teacher there to rip away his Christian faith. I finally pulled him aside one day because the madness had to end. What did I do? I started out by praising him for everything I was about to rebuke him for… because his warrior spirit and desire for truth were potentially beautiful. And then I gave a verbal spanking of a lifetime, because as “beautiful” as those qualities were in theory, the way he was acting was inappropriate and it was doing more harm than good for the cause of Christ.

It is also difficult to explain to a child that “Because we follow the Bible, doesn’t mean we have to go correcting everyone else.” I call this the “You’re going to hell” syndrome. Children are very black and white in their thinking. I was the same way. Nobody will be persuaded when you go around telling them they are wrong and/or going to hell all the time. So how should we be presenting the concept of rejection to our kids?Our kids need to EXPECT to be swimming against the cultural current! Click To Tweet

First off, we need them to be expecting to live counter-culturally. The cultural norms are beginning to erode so far away from Judeo-Christian morality that your children – if they stick to a Christian worldview – will be fish swimming against the current. If you aren’t teaching them to expect to be swimming against the current, they will inevitably be surprised that it is so hard. If you routinely tell them “In this household, we do not decide our behavior based on everyone else’s views of right and wrong,” you will save yourself time once they get old enough to whine “But everyone else is doing it?” At that point, all you have to do is say “What do we always tell you?” and let your teenager basically lecture themselves by repeating the speech they’ve heard you give a thousand times before.What you tolerate today, you accept tomorrow. What you accept today, you embrace tomorrow. Click To Tweet

So, in summary – we don’t want to be raising kids with victim complexes who attribute every personal slight as stemming from the world hating them for their Christian faith. However, neither do we want them to be surprised when the world heaps abuse on them for not plunging into the flood of wild and destructive moral living. The Bible is the final authority on right and wrong. There is no need to go beyond scripture like Pharisees did and define every nuance of appropriate living for your children. However, where the Bible speaks boldly and with conviction, feel free to follow suit – but always with love as the goal.

Have you ever experienced rejection for your faith? Have your children? What advice would you have for someone else? Tell us about it in the comments!