The Importance of Incorporating Doubt Into Our Children’s Worldviews 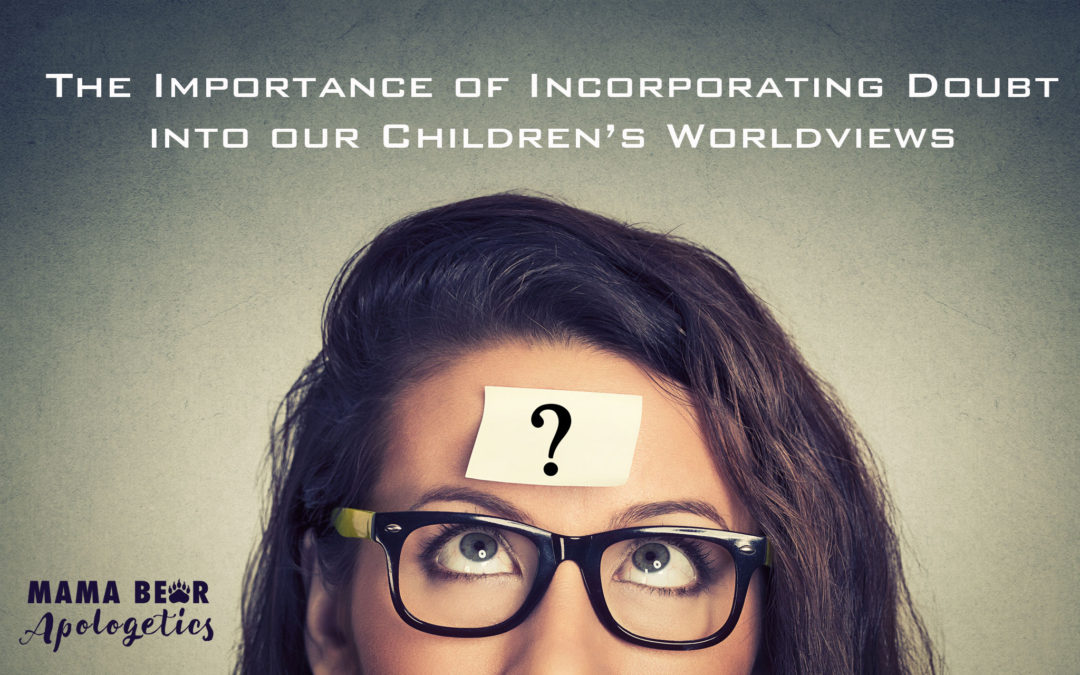 The last 2 blog posts, we discussed the importance of incorporating suffering and rejection into our children’s wordviews. The final piece of the puzzle is allowing space for doubt. When doubt is not incorporated into the Christian worldview, bad things happen. Ignoring a problem is a surefire way to make it grow. For some, doubt is considered a dirty word. It’s proof that your faith is weak and you just need to believe harder. If something is causing you to doubt, shove it down and crank up the worship music.Shoving down doubt rarely solves the problem. It just festers and explodes later. Click To Tweet

While this might seem helpful in the short run, it very rarely solves the problem. Rather, it creates a spiritual abscess which, if left to fester long enough, can cause serious and possibly irreparable damage in the long run.

Let me be clear: doubt is not proof that your faith is weak. Doubt doesn’t make baby Jesus cry, and good little Christian boys and girls can ask the tough questions. To use another physical analogy, I consider doubt to be like a fever – helpful on some levels, but dangerous if it goes on too long. Many people don’t realize that a fever is actually a beneficial reaction of our immune system. Bacteria only have a certain temperature range within which they can thrive, and a fever is basically the body’s natural defense to kill off the bacteria. A fever is also very useful because it can alert you to a problem that you wouldn’t otherwise be aware of.

As a fever is useful to alerting us to foreign elements in our body, spiritual doubt can be used to alert us of bad theology that has crept into our worldview. These “foreign elements” might be incorrect beliefs, sin in our lives, nagging questions, or even spiritual attack. Doubt can stem from emotional factors (Why did God let my mom die, or my parents get divorced?), intellectual factors (Did Jesus really exist, or is He a made-up character meant to scare people into obedience?), behavioral factors (I know I’m supposed to be a Christian, but they are so old-fashioned about sex), spiritual factors (like spiritual attack) or even physiological factors (generalized anxiety anyone?)Whatever the cause, doubt is alerting you to something that needs to be worked through Click To Tweet

Whatever the cause, doubt is alerting you to something that needs to be worked through. It should never be ignored anymore than you should ignore a fever. And like the body’s immune system, addressing these doubts head-on serves to strengthen your child’s spiritual immune system. Once they work through some of the tough questions now, they will not be as vulnerable to attack once they get out into the world on their own. The answers to doubt are rarely a one-size-fits-all solution. However, teaching our children that doubts can be healthy is key to refining a robust faith – a faith that is capable of existing outside the Christian bubble.

Does the Bible agree with me about doubt? It does. I think the story of John the Baptist is the best story on doubt. John the Baptist was referred to by Jesus as the greatest man ever born to woman (Matthew 11:11). Yet in the middle of Jesus’ ministry, John – the same John who prophesied about Jesus’ deity – asked his disciples to ask Jesus “Are the you the Messiah we have been looking for, or should we be looking for another?” Why did the “greatest man ever born to woman” suddenly begin doubting everything he thought he knew about Jesus? Because he too had to purge his worldview of an incorrect perception of Jesus. The Jews expected the Messiah to ride in on a white horse, conquer Rome, and then establish a kingdom where they were top dog. As he sat rotting in prison, it’s understandable that John the Baptist began doubting whether or not Jesus was this Messiah.

So how did Jesus answer this flagrant act of doubt?! Rebuke John? Tell him to “just have faith?” Use him as a sermon illustration of what it looks like to be weak? No. He responded to John with evidence. And not just any evidence; He appealed to what He knew John valued: Old Testament prophecy. “Jesus told them, ‘Go back to John and tell him what you have heard and seen— the blind see, the lame walk, those with leprosy are cured, the deaf hear, the dead are raised to life, and the Good News is being preached to the poor.’”

What John didn’t know was that Jesus was not coming to establish an earthly kingdom yet. He didn’t give John all the answers, or lay out his entire plan. However, He did answer John according to John’s own values, which is exactly how we need to help answer our children’s doubt.

A correct worldview is important. Nobody short of heaven will have perfect theology. Distortions in our worldview can cause us to build on a less stable foundation. Incorporating suffering, persecution, and doubt into our own and our children’s worldviews may seem tough now, but will inevitably prepare them for the storms ahead in life. And if there’s one thing that Matthew 7 is clear about, the storms come either way.

Have you or someone you know gone through a period of doubt? What has been helpful for you? Let us know in the comments!