Why did God Create the Tree in the First Place? 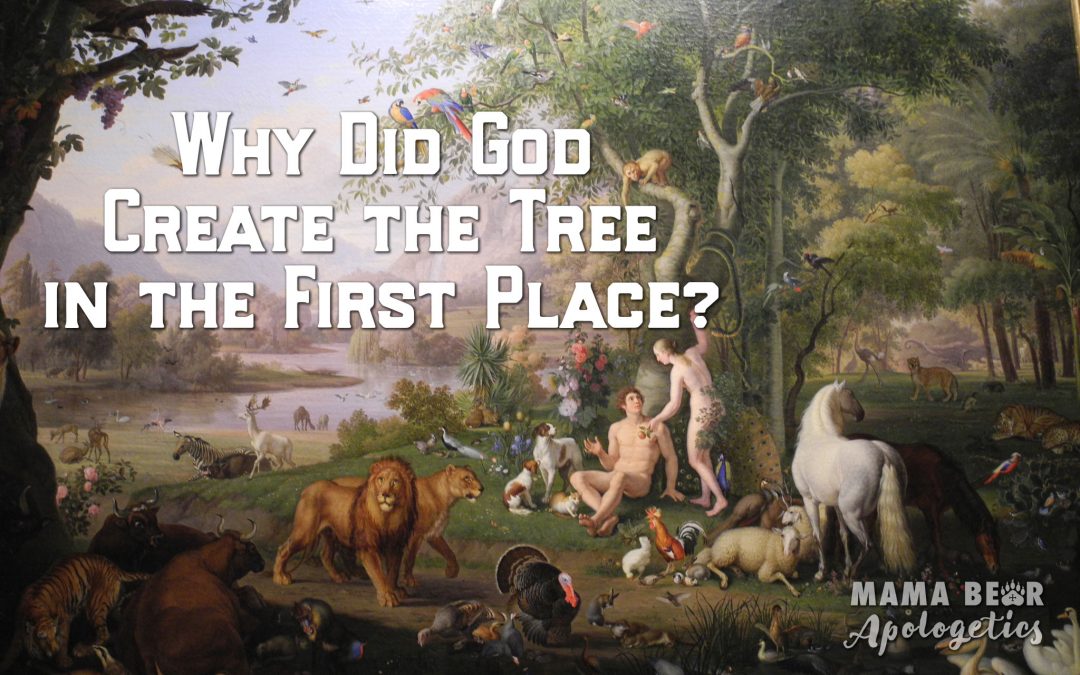 A few weeks ago, our church’s 3rd-5th graders were learning about the creation story from Genesis, and I was brought in to the planning process to help address common science misconceptions that the kids will encounter as they get older. (i.e. “Science can disprove God,” “Natural processes alone can produce design,” or “Science uses facts, religion uses faith.”) After completing the unit, the kids were given the opportunity to submit questions about the creation story, so today I went back to answer them. Some questions were simple like, “Why did God create animals and not just people?” Other questions were more theologically gritty, and required longer explanations. One in particular was, “Why did God create the tree in the first place?” (Another student asked “Why couldn’t Adam and Eve eat the fruit,” so I lumped them together in one answer.)

A great mystery for kids is why God created a way for Adam and Eve to sin. (Frankly, many adults are stumped as well!) From our shallow understanding, it may seem like God is to blame for all the evil in the world. If He hadn’t put the tree there and given Adam and Eve the rule to not eat from it, they wouldn’t have disobeyed, and our world wouldn’t be in the mess it’s in today. And Christ wouldn’t have had to come and die! So wouldn’t it be a net-win for God as well? Couldn't Christ have been spared suffering if God had just nixed the tree? Click To Tweet

If this question has plagued you, you are not alone.  This question falls under the broader category of “How could a good God allow so much evil in the world?” This is what apologists and skeptics refer to as, “The problem of evil.” Clay Jones has written an excellent book discussing why God would allow evil. For today, I will take some of his arguments and condense them into a kid-friendly version, with lots of concrete examples.

This is an uber-important question to answer well, because if we (adults) do not have a firm grasp on why God created the option for Adam and Eve to sin, then how can we expect our kids to understand the reasons for Christ’s death, resurrection and the plan for redemption? It reminds me of what my friend Tommy used to do to me in high school. We’d be standing in the bleachers at a football game and he’d push me just enough to make me lose my balance a little, but then grab me at the same time (so I wouldn’t actually fall) and say, “I just saved your life! Now you owe me your life!”

When we teach original sin and God’s plan for salvation without understanding why God created the tree, it can sound a lot like the game my friend would play; God tricks us into sinning (or caused us to sin), but then says, “Here’s a Savior to save you from your sins! Now you owe me your life!” I have heard adult atheists profess this kind of understanding of the redemption plan, and it is better to nip this line of thinking in the bud because it reflects a poorly-informed understanding of the nature of love. What's love got to do with it? Click To Tweet

This is fairly intuitive to most people, regardless of age. I asked the kids today, “Can you force someone to love you?” I didn’t get a single confused look, or accidental head nod. They all knew the answer was no. God gave me a silly little illustration last night. I was feeling down, and fluffy things are like opium for me. I wanted to snuggle with my cat. She did not. I could overpower her for a little while, but she was obviously not into our little “snuggle session,” and the moment I let up, she squirmed her way out of my arms. Even in the animal kingdom, love cannot be forced. How much more so with people? God did not want robots, and he will not force His love on us. Click To Tweet

God could have created us like robots, without the ability to reject him or disobey. Growing up, I had a little stuffed dog named Chuck. I still pull him out of the closet occasionally on insecure nights. As much as I love Chuck, he will never love me back. There is no relationship. God creating creatures that can’t disobey is like us holding on to a stuffed animal; the most you can expect to receive is comfort, but not love. Not to mention, the “relationship” is very one-sided. God is love. He did not want robots, and he didn’t want dolls to play with.

God also has no interest in forcing us to “act” like we love him. I can pick my cat up and force her to snuggle with me like I did last night. I can hold her tightly, and prohibit her from using her free-will to escape, but it doesn’t facilitate a very loving relationship, and it’s not very satisfying. It is most satisfying when she comes to me of her free-will and wants to sit on my lap, be petted by me, and engage in whatever level of relationship in which cats are capable.

Do you realize that there was literally no way to disobey God aside from the tree in the garden? You cannot disobey someone if there are no rules. A good way to illustrate this concept for kids is by using the windowless-doorless house analogy. Let’s say that we don’t want our kids to go outside.  If we put them in a house that had no windows and no doors, and then said, “You can go anywhere you want,” have we given them free-will? No. What if there were all sorts of cool things in the house? Let’s pretend that we made it the perfect environment where they didn’t want to leave. Are they still free? No. If there is no way to leave, then they aren’t really free. There was literally NO way to disobey God without the tree. Is there obedience without choice? Click To Tweet

The tree was the proverbial door in the perfect house that God created for us. God placed Adam and Eve in as perfect an environment as you can get, and he made it theoretically easy to stay. There was only one door. God said, “I would love for you to stay with me here forever. However, if you want to leave, that is the door.” Adam and Eve were told not to eat of the fruit. They were told that bad things would happen if they did (Gen 2:17). God could have prevented Adam and Eve from ever having the choice to rebel against Him, but again that’s not love, and God IS love. Love is the very essence of God, much like some abstract quality of “Hillary-ness” is to me. I had the kids repeat a sentence with me multiple times. “God is love. Love can only be given freely. Freedom means that there is both choice, and responsibility.” God’s very nature mandated that He give Adam and Eve both choice and responsibility if his end-goal was a loving relationship!

3.) The tree in the garden was basically the easiest test to pass… and we still failed

I honestly don’t know how God could have made it easier to choose Him. It’s not like he built a staircase that they had to use every single day and said, “Thou shalt not step on the 4th step. The day you do, you shall surely die,” and then just waited for them to accidentally step on it. It’s not like he said, “All your days, you shall eat brussel sprouts and asparagus, but the chocolate pudding in the middle of the garden, you shall not eat.” No. They had everything they could possibly want.

God didn’t trick Adam and Eve. He didn’t force them to sin. He didn’t hide the consequences of eating the fruit. He was very upfront about the whole Death thing.

He didn’t deny them food, and then punish them for eating. We were not starving men, thrown into jail for stealing a loaf of bread. He didn’t even create multiple trees, and make them remember where they were! It was one tree, right smack in the middle. How big was the garden of Eden? We don’t really know, but we can be sure that it didn’t have a 10-foot diameter. There was no reason for Adam and Eve to be hanging around the tree. The only reason is that it was the one forbidden fruit, so of course that’s where the party’s at. It's not like God said, 'Thou shall only eat broccoli, but the the chocolate, you may not eat.' Click To Tweet

The answer to the question, “Why did God create the tree in the first place,” is simple. Like I had the kids repeat: God is love. Love can only be given freely. Freedom means there is both choice, and responsibility. God wanted a relationship with us! He didn’t want to create robots. He could not force His love on us without it exterminating any hope for a loving relationship. He gave Adam and Eve every reason to trust Him, but they chose to doubt His goodness, and ultimately believed the lie that they were better judges as to what was good for them. He created the tree because it was a manifestation of his character, of his love. He didn’t force Himself on Adam and Eve, and He doesn’t force Himself on us.

Now, some might object to God’s method’s by asking, “Did God give Adam and Even enough information to make an informed decision? They wouldn’t have eaten the fruit If they really knew what that would do to the rest of humanity, right?” Can’t we still fault God for their decision because He didn’t give them enough information? I’ll answer that question in the next post!