Getting to Know Your Muslim Neighbors 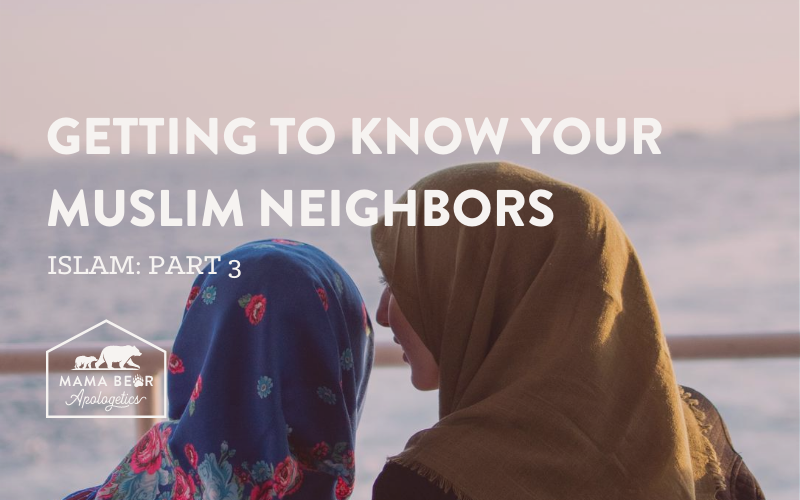 “…I do not think a religion ought to be judged on the basis of some of its followers. The actions of some Christians do not necessarily say anything about Christianity, and the actions of some Muslims do not necessarily say anything about Islam. … what matters are the teachings of Jesus and the teachings of Muhammad.” – Nabeel Qureshi[1]

Welcome back to our series about Islam, Mama Bears. This is the third article out of four, and so far, we’ve covered the basic beliefs of Muslims (click here for article one) as well as details about Muhammad and his life (click here for article two). Now, let’s talk about getting to know your Muslim neighbors. My hope is that this article will give you some insight on how to engage with Muslims with genuine love and friendship.

Would it surprise you to know that Americans in general view Muslims less favorably than people from other religions and even atheists?[2] Why would this be? I would argue that a lot of it has to do with misunderstanding Islam and its followers. Most Muslims are just as peaceful as Christians, but on the other hand, the Quran includes some violent passages that have been cited as justification by Muslims who commit terrorist attacks. So, which is it? Is Islam violent or peaceful? More specifically, is your Muslim neighbor violent or peaceful? Well, that’s a loaded question without an easy answer.

As you may imagine, this is a complex issue. For the difficult surahs (chapters in the Quran), Muslims have naskh (Arabic for abrogation,[3] Quran 2:106 and 16:101), which is essentially the substitution of one revelation for another. This means that Muslims will abrogate, or repeal, older teachings in the Quran for newer revelations. There is, however, some contention among scholars disagreeing over which verses are abrogated because it’s not always clear which ones are older. 1I liked Nabeel Quereshi’s breakdown of this issue in his book, No God But One (Grand Rapids, MI: Zondervan, 2016). See, in particular, chapters 17 and 18. Keep in mind, too, that Muslims not only look at the Quran for guidance – they use the hadith, Muhammad’s sayings, and the sunnah, summaries of Muhammad’s lifestyle and practices, as supplements to the Quran. It really depends on how individual Muslims and sects interpret their teachings, and you’ll find vast differences between how Islam is taught in the East versus the West.

In order to fully understand this issue, we must keep in mind that many Muslims memorize sections of the Quran in Arabic (even if they don’t actually speak the language), so they may not know what it means. Sometimes, they memorize passages in their own language based on what they are told to memorize by their parents or spiritual leaders. As a result, many (but not all) Muslims have little or no knowledge of violent, difficult, or contradictory passages in the Quran, hadith, or sunnah. If you are in the U.S., this will probably be the case for most Muslims you meet.2Nabeel Qureshi explains this in more depth in his book, Seeking Allah, Finding Jesus (Grand Rapids, MI: Zondervan, 2016). See especially chapter 19. Further, Western Muslims are generally taught that Islam is a religion of peace.3Nabeel Qureshi, Seeking Allah, Finding Jesus (Grand Rapids, MI: Zondervan, 2016), 115-17. Most Muslims you encounter, especially in the U.S., are probably no greater a threat than your average non-Muslim, and we would, therefore, have no reason to be afraid of them.

Building Bridges with Your Muslim Neighbors

So, how do we approach our Muslim neighbors? Well, this may sound too easy for you, but your task is simple: just be friendly. Notice I didn’t say, “Argue with them until they finally agree with you and only then can you become, like, actual friends.” (#facepalm) They are not projects! They are people to be loved, made in the image of God.  Ask them how they’re doing when you pass each other at the mailbox. As you interact more, you can begin to ask them about deeper subjects, like what they believe. As our own Robin Lopez told me, she’s never asked a Muslim a question and received a rude response. She’s found them to be more than happy to share openly about their faith and other aspects of their lives.

How should you share your faith with Muslims? That depends (just like it does for anyone else you want to share your faith with). Sometimes, it’s a 30-second elevator speech, and sometimes it’s a lifelong commitment to leading them there. With Muslims, the latter is probably better, but you should be prepared for either scenario. This goes back to knowing why you believe what you believe, which is why we do apologetics in the first place! Speak with your Muslim neighbors on a personal level. Get to know them. Be interested in their story and their families. Have them over for dinner (don’t forget to ask them what they can and cannot eat). Find out why they believe what they believe! And you can share why you believe what you believe. You don’t have to compromise the truth of Christianity to be friends. Most Muslims will actually respect the fact that you have strong convictions (assuming you are polite and kind). Get to know your Muslim neighbor. Invite them over for dinner. Be interested in who they are and build relationships. Click To Tweet

It’s also important to keep in mind that Muslims, just like Christians, vary in their level of knowledge and commitment to their faith. This means that blanket statements about all Muslims (especially regarding violence) may not be accurate of your neighbors and may cause unnecessary offense. It also means that your Muslim neighbor may have different beliefs than you would otherwise expect, which creates a wonderful opportunity for meaningful conversations.

What many Christians don’t realize about Muslims is that they actually have a high regard for Jesus and the Bible. They don’t think Jesus was divine, but they do consider Him and other prominent Old Testament figures like Noah and Abraham to be prophets (many are even mentioned in the Quran).[4]

Former Muslim turned Christian apologist Nabeel Qureshi said that, as a Muslim, he struggled most with the New Testament writings, not what was found in the Old Testament — “the way I saw it, the Old Testament mostly agreed with the Quran: it named many of the same prophets, it showed prophets going to war with polytheists, and it did not say anything about the Trinity. The New Testament is what really offends Muslim beliefs… .”[5] This means that you can refer to the Jesus and parts of the Bible, especially the Old Testament, in your conversations without fear of being offensive. That being said, once you have established a habit of conversation with your Muslim neighbor, don’t be afraid to venture into discussions about the New Testament. It can be helpful to hear their perspective regarding the contradictions they see between the Quran and the New Testament. When you take the time to understand their beliefs clearly, they will likely be more open to listening to you share your reasons for believing the New Testament, especially when you express those reasons with gentleness and sincerity.

Addressing the Violence Issue (or the Elephant in the Room)

As Christians, “You are the light of the world. A city set on a hill cannot be hidden. Nor do people light a lamp and put it under a basket, but on a stand, and it gives light to all in the house. In the same way, let your light shine before others, so that they may see your good works and give glory to your Father who is in heaven” (Matthew 5:14-16). Let’s be the light to our Muslim neighbors.

In the fourth and final article of this series on Islam, we’ll cover common questions you or your kids might have about Islam. If you’ve got something you (or your kids) want to ask, let me know in the comments.

[3] You can read more about abrogation here: David Bukay, “Peace or Jihad? Abrogation in Islam,” Middle East Quarterly (Fall 2007), 3-11, https://www.meforum.org/1754/peace-or-jihad-abrogation-in-islam, accessed May 8, 2020. Please note that we do not agree with everything Bukay has ever said or written; rather, he gives a good summation of the topic of abrogation, which is why this article is shared here. We used the chew-and-spit method before deciding to share it. We encourage you to do the same.